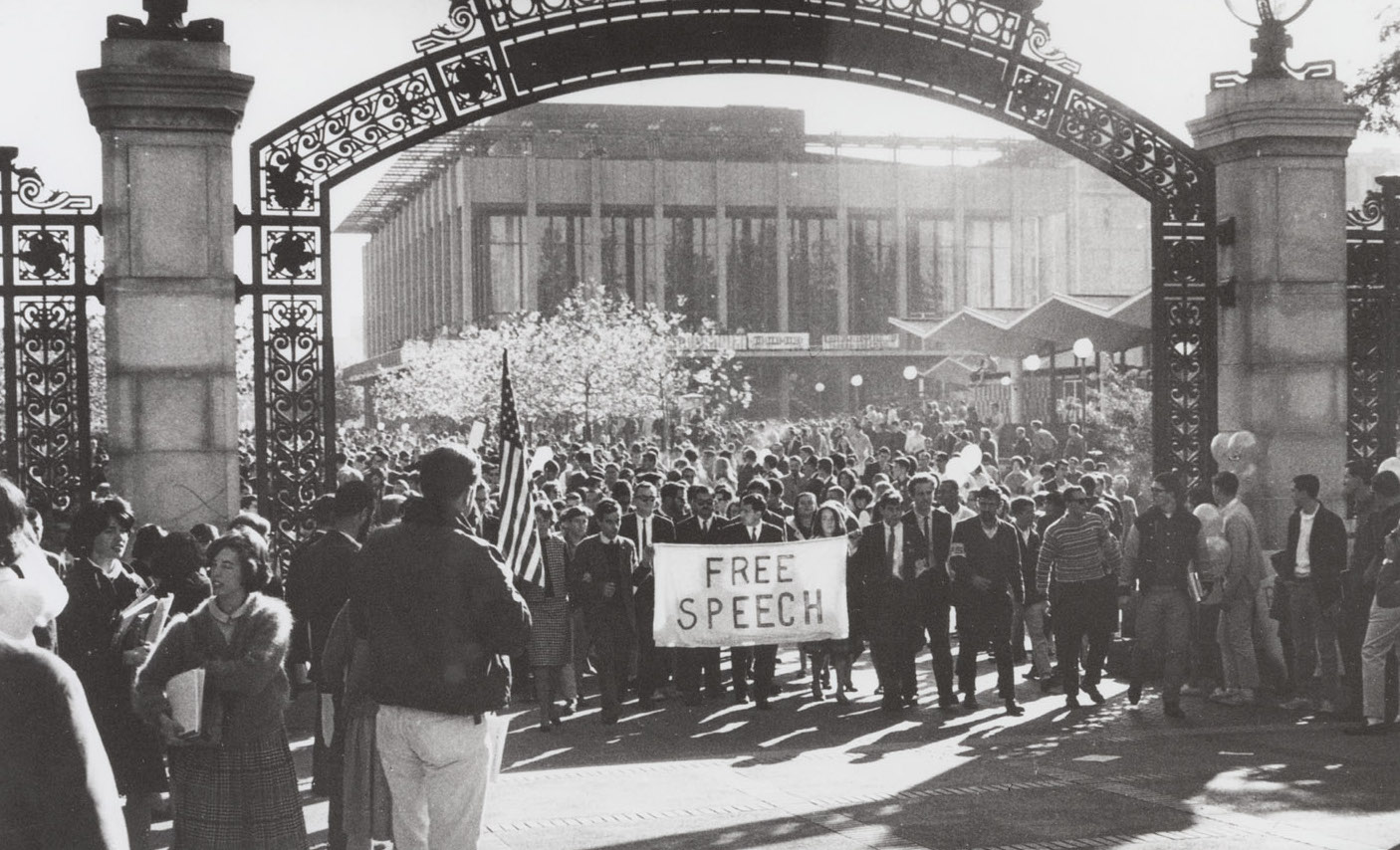 The purpose of this resource guide is to present research-based evidence and perspectives on a range of free speech issues.

The Haas Institute supports the protections of freedom of speech and expression. We are unambiguous proponents of critical inquiry and academic freedom.

However we believe in the conversation around the First Amendment, it is important to recognize a distinction between those who come into our communities and campuses in order to engage in dialogue, and those whose underlying aims are to sow hatred, create divisions, and mainstream white supremacist ideologies with an intent to target and harm specific populations.

Below you will find content we have assembled from research reports, legal briefs, and media, that illustrate some of our perspectives and research on how to expand the conversation on free speech in 2017.

When considering what constitutes free speech, and identifying what is intended to injure, we refer to our concept of Othering & Belonging, and the question of who belongs in our society. A good indication that a speaker intends to harm is through their calls for excluding from society those who are different from them, especially those from marginalized groups, including transgender people, Muslims, women, people of color, people with disabilities, and many others. They are, in essence, denying their humanity. They are telling individuals from those groups, "You do not belong."

Listen to Haas Institute Director john a. powell discuss belonging and other issues around of speech during the September 8, 2017 UC Berkeley Faculty Panel on Free Speech below.

powell elaborates on the idea of belonging in a recent statement, "On speech and belonging." In the piece, he writes:

"In thinking about free speech, we must first take a look at ourselves, understand who we are, who we should strive to be, and remember the core values we share as Americans, including justice, equality, and liberty. While there will always be disagreements, what we cannot do is deny the worth of any individual or our common, shared humanity."

Once unmasking those who claim to be engaging in free speech, we can begin to understand the hidden agenda of white supremacists to consolidate power by attempting to mainstream their radical-right movements. By framing their actions as a free speech issue, they have drawn attention away from their true objectives, and presented themselves as victims whose rights are being violated.

In a recent New York Times piece, a Swedish activist explains how he spent one year undercover as a member of the so-called "alt-right" where he met with white supremacist leaders who were explicit in their goals and strategies to frame the debates.

"This goal of mainstreaming is an abiding fixation of the far right, whose members are well aware of the problems their movement has had with attracting young people in recent decades."

Haas Institute Program Manager Eli Moore also touches on the issue of framing in a recent piece called "Why They Keep Coming." In his article, Moore describes how the reoccurring visits by far-right figures to campus, branded as "free speech" issues, fit into the broader effort by opportunistic political operatives to activate and exploit white racial anxiety and animosity to preserve and expand political power. He notes the precipitous increase in the number of hate groups around the time of President Barack Obama's election, and their emboldenment with the election of President Donald Trump when a shift was observed in the far-right's messaging towards "a bull-horn version of strategic racism."

"Bringing their incendiary and harmful messages to UC Berkeley, and framing the confrontation as one about free speech, the provocateurs are attempting to retell the story that they are the excluded, truth-telling victims."

Another strategy of those seeking to mainstream ideologies of hate and white supremacy is to use coded racial terms that appeal to racial anxieties of the populate. The term "alt-right" itself is code for white supremacists, and was practically non-existent until a few years ago when white supremacists launched a branding initiative to mainstream their movement. As Eli Moore noted in an article last year, the term "represents a white nationalist network’s ability to disguise, rebrand, and reinvent itself into something more palatable to the general public."

"The ideas of white nationalism remain, yet the stigma associated with that term are left behind as the network adopts a trendier and less threatening new identity: the 'Alt-right'."

White supremacists have adopted other euphemisms as well, including terms like "Western civilization," "European heritage," and "nationalism" to appeal to whites. This strategy is nothing new. President Donald Trump's signature slogan "Make America Great Again" itself contains racial overtones. It evolved from an earlier Republican phrase, "American exceptionalism," which evoked historical appeals to "states' rights" famously used by Republican presidential candidate Barry Goldwater in 1964 to win over pro-segregationist southern Democrats.

Ian Haney Lopez, the director of the Racial Politics Project at the Haas Institute and a public law professor at UC Berkeley, authored the book Dog Whistle Politics: How Coded Racial Appeals Have Reinvented Racism and Wrecked the Middle Class, which examines the contemporary and historical applications of racially coded terms. In a TEDx talk, Lopez noted that Goldwater, in appealing to racist sentiments, was able to garner the votes of an entire block of southern states that had traditionally voted Democrat, and which had benefitted the most by the Democrats' New Deal policies to pull them out of the Great Depression.

The strategy was popularized in the midst of the Civil Rights movement when fear permeated among white communities due to the strides African Americans were making in the struggle for rights, access and influence. Politicians, Lopez wrote in a brief on the concept, sought to "harness and then foment this seething sense of insecurity" to garner votes and satisfy the billionaires funding their campaigns with their own particular goal: lowering government involvement in their economic activities. Republicans, and some Democrats as well, began campaigning on ominous phrases like "inner city crime" and "the silent majority," both of which nodded to race. But the goal was not to control minorities. It was to win elections. Today, with the emboldening of a white supremacist movement, the strategy remains the same, but the goal has become much more dangerous.

The dominant narrative around free speech is that speech does not cause harm, or that even if it does cause harm, the sanctity of the First Amendment trumps whatever injury may be caused by hate speech. Such was the basis of the 1992 Supreme Court decision in R.A.V. v. St. Paul, which ruled that a city ordinance prohibiting the burning of a cross outside the home of a Black family was unconstitutional and violated the First Amendment rights of the white supremacists despite the trauma caused to the Jones family. Rather than to take into consideration the effects of such an act on the autonomy of the Jones family and their sense of belonging in the neighborhood, the court viewed the case merely as a dispute between free speech and censorship.

john a. powell illustrates this point in a 1998 legal brief, titled "As Justice Requires/Permits: The Delimitation of Harmful Speech in a Democratic Society." In it, he critiques the notion that expressions of hate speech such as the burning of the cross outside the Jones' home, rather than be regulated or outlawed, can be remedied through "more speech" in a marketplace of ideas since one party of the conflict (the white supremacists) "have already conveyed the fact that they do not care to hear what the Jones family has to say." powell writes:

In a separate 1996 brief titled "Worlds Apart: Reconciling Freedom of Speech and Equality," powell similarly argues that inclusion and belonging outweigh harmful speech, writing that we should only allow so much speech as justice and equality permit. If, in a democratic society, members are barred from participating, they cease to exist. Read the brief here.

In an interview with the Haas Institute's communications team, powell delves more deeply into the effects of injurious speech, how that type of speech harms individuals, and identifies several cases where injurious speech led to severe consequences, including suicide. Have a listen below.

HOW OTHER COUNTRIES HANDLE HATE

With white supremacists having figured out how to exploit the First Amendment to promote hate in the US, it is worth considering how other countries approach issues of speech and harm, and strike a balance between free expression and protections against the injurious effects of hate speech. Examining how other Western democracies like Canada and Germany approach hate speech, Haas Institute writer Sara Grossman noted in a recent blog post that the US remains relatively lax on the issue, arguing that the country has become the "safest space in the world for hate groups to lay roots, cultivate, and thrive." She writes:

"Although many critics in the US argue that free speech should be a limitless right, unbound by concerns over the very real pain, anguish, or distress felt by those who may be targeted by such speech, other similarly-developed nations have discovered great societal benefits in curtailing some forms of hateful speech—and ensuring all groups can express their identities and beliefs safely."

A handful of actions had been planned for September in response to the scheduled appearances of far-right figures. But with the right-wing events having been cancelled, the response has been scaled down.

At the faculty level, some lecturers including professor powell had initially committed to a boycott of the campus on the days in which the extreme-right speakers were scheduled to appear, and instead hold their classes off campus. One of the ideas behind the boycott was to ensure that students are kept a safe distance in the case of a repeat of the violence that occurred on campus in February. In remarks to the Daily Cal, associate teaching professor of African American studies Michael Cohen said:

"This is a clear threat to public higher education. People are coming to humiliate others and incite violence. … The boycott is a refusal to allow this to happen on our campus."

And at the student level, a number of groups organized gatherings, protests, and other events in coordination with the UC Berkeley chapter of the ACLU.

Leah Weaver, a fourth-year undergrad and the secretary of the UC Berkeley chapter of the ACLU, was one of the key organizers of the events mentioned above. She worked with and listened to the concerns of many students who have expressed a range of emotions and opinions regarding the appearance of right-wing speakers. One of the common sentiments among them, she explained, is frustration in the amount of resources being dumped by the administration in response to the speakers, which they feel should have gone towards student needs. Listen to her views in the audio recording below.

Here are useful readings that help us think about speech in a deeper and more profound way:

"The Science of Equality, Volume 1: Addressing Implicit Bias, Racial Anxiety, and Stereotype Threat in Education and Health Care." Download this report, which is co-authored by john powell, here.