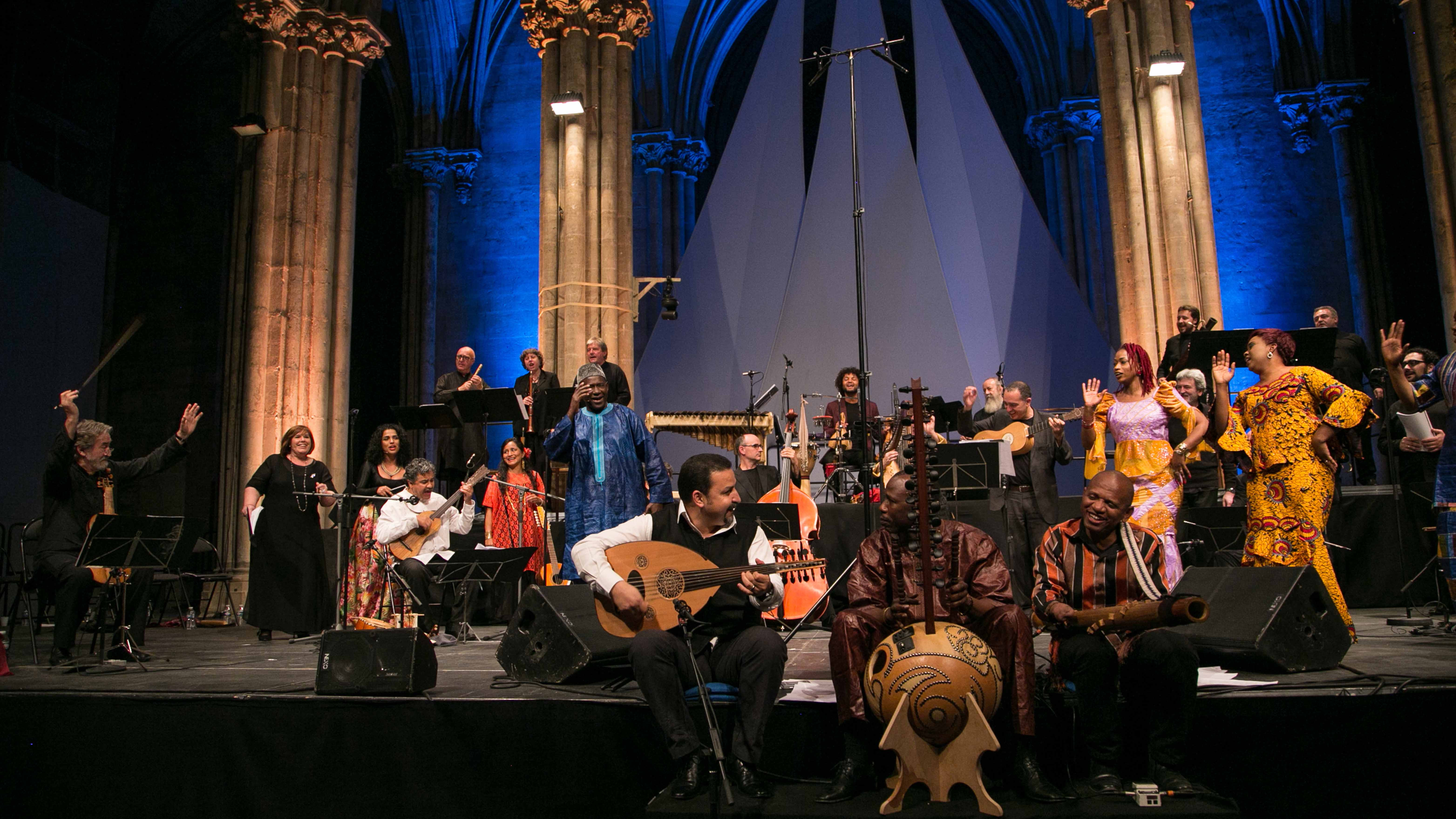 The performance and associated events are part of the Berkeley RADICAL 2018–19 Citizenship programming strand, in which artists explore issues of belonging and place in the context of current conversations about immigration and nationalism

Berkeley, October 4, 2018 — Cal Performances at UC Berkeley welcomes back viola da gamba virtuoso, music scholar, and innovative ensemble leader Jordi Savall in one of his most expansive and ambitious programs to date—The Routes of Slavery (1444 –1888), on Saturday, November 3 in Zellerbach Hall. Savall brings together more than two dozen performers from over ten countries on four continents to pay tribute to the contributions of enslaved Africans, and their descendants, to world culture. In The Routes of Slavery, Savall contextualizes the celebratory tone of the music through spoken historical readings intertwined with performances by instrumentalists and vocalists from Mali, Colombia, Catalonia, Europe, Mexico, Brazil, and Venezuela.

The performers for The Routes of Slavery include Savall on treble viol with his longstanding eight-member Hespèrion XXI ensemble and frequent collaborators Temembe Ensamble Continuo, which specializes in Baroque Hispanic and Mexican traditional music. They will be joined by the Catalan choir La Capella Reial de Catalunya; Canadian soprano Neema Bickersteth; and special guests from Mali, vocalist Mohamed Diaby, kora player and vocalist Ballaké Sissoko, and dancer/vocalists Mamani Keita, Nana Kouyaté, and Tanti Kouyaté; from Brazil, soprano Maria Juliana Linhares and percussionist Zé Luis Nascimento; and from Venezuela, bassist Iván García. The performance is put into context by narration from Bay Area theater hero Aldo Billingslea, recognizable from his many roles portrayed in productions of American Conservatory Theatre, Aurora Theatre, California Shakespeare Theatre, Cuttingball Theatre, Magic Theatre and Lorraine Hansberry Theatre where he has been serving the interim artistic director since June 2017. Non-English language vocals will be performed with English supertitles.

Savall’s program traverses four centuries of music, from 1444 (the year of the first mass slave expedition) to 1888 (the year slavery was abolished in Brazil), during which time more than 25 million Africans were transported by European countries to be bound in slavery. Savall offers his program as both an homage to the memory of victims of the slave trade, and a tribute to their lasting cultural contributions. The music is drawn from three continents involved in the African slave trade, and brings together early music of the colonial period with the musical traditions of Mali and the oral traditions of the descendants of slaves in Brazil, Colombia, and Mexico. The music is accompanied by historical texts on slavery, beginning with early chronicles of the trade in 1444 and concluding with texts by the Rev. Martin Luther King, Jr. shortly before his assassination in 1968.

In conjunction with the performance, a public forum entitled Journeys of Belonging is planned on Saturday, November 3 at 3pm in Wheeler Auditorium on the UC Berkeley campus. The forum will include an artist talk by Jordi Savall, a musical activity led by vocalist Melanie DeMore, and a panel discussion exploring the concept of citizenship, using a framework developed by the Global Justice Program of the Haas Institute for a Fair and Inclusive Society. The event is free and open to the public. Updates and more information will be added to Facebook here. In addition, a free Catharsis Café post-performance discussion and reception for ticketholders will take place in the Zellerbach Hall lobby.

Savall’s performance is part of the 2018–19 season’s Berkeley RADICAL Citizenship programming strand, which explores the human need for belonging, and connects the performing arts to our society’s current sense of urgency around issues of immigration and nationalism. The artists in this strand share their unique perspectives on the threats to—and responsibilities of—citizenship. The Haas Institute for a Fair and Inclusive Society is Cal Performances’ campus partner for all the Citizenship strand events. UC Berkeley’s Center for African Studies is a partner for Routes of Slavery and Barber Shop Chronicles (October 26 -27.) An article about Citizenship programming can be found at https://calperformances.org/learn/berkeley-radical/2018-19/citizenship-within-and-without-article.php and more details about it is at calperformances.org/berkeley-radical.

This is one of only five performances of The Routes of Slavery this fall. The production appears at Stanford Live on Sunday, November 4.

Tickets for Jordi Savall, The Routes of Slavery (1444­–1888) on Saturday November 3 at 8pm in Zellerbach Hall range from $56–96 (prices subject to change). Half-price tickets are available for UC Berkeley students. Tickets are available through the Ticket Office at Zellerbach Hall, at (510) 642-9988, at calperformances.org, and at the door. For more information about discounts, go to calperformances.org/discounts.

Program: Jordi Savall returns with The Routes of Slavery (1444–1888), which unites more than two dozen performers from over ten countries on four continents in a reverent celebration of the influence of enslaved Africans on the culture of the Americas and Europe. Vocalists from  Canada, Mali, and Catalonia blend with instrumentalists from Mexico, Colombia, Brazil, and Europe with historic readings intertwined throughout.

Berkeley RADICAL: This performance is part of the Citizenship thematic strand, which spotlights the human side of the current debate on immigration and nationalism. By sharing unique perspectives on the threats to—and responsibilities of—citizenship, the artists included here illustrate the universal need for belonging and home, and invoke the very real sense of urgency and peril that pervades the world today.

A Public Forum will be presented in conjunction with Jordi Savall’s The Routes of Slavery (1444–1888). The program will begin with an artist talk by Savall, followed by a musical activity led by vocalist Melanie DeMore, and then a panel discussion exploring the concept of citizenship, using the Othering and Belonging Framework developed by the Global Justice Program of the Haas Institute for a Fair and Inclusive Society. Confirmed panelists include Ahmad Sikainga, Dept. of History, Ohio State University; María Elena Díaz, Dept. of History, UC Santa Cruz; and Mina Girgis, musicologist and founder of the Nile Project. This program is free and open to the public.

A free post-performance discussion and reception for concert ticketholders.