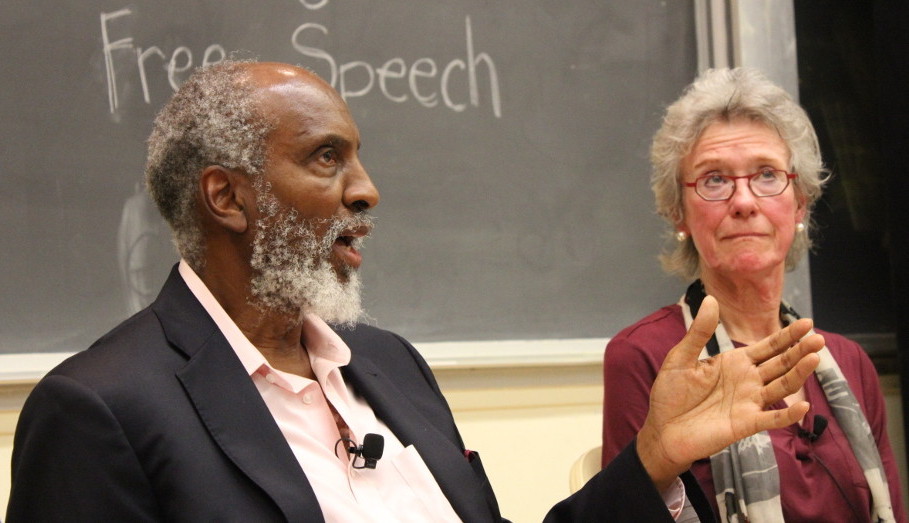 BERKELEY, CA: Right-wing, nationalist figures scheduled to make appearances this month at UC Berkeley are coming with the intent to do harm, not engage in dialogue, Haas Institute Director john a. powell argued at a panel discussion on free speech hosted Friday by Chancellor Carol Christ.

Without explicitly calling for a ban on allowing those figures, who include media personalities Ben Shapiro and Milo Yiannopoulos, to visit campus, powell challenged an auditorium packed with students, faculty and staff to think more deeply about the issue of free speech rather than accept a notion that First Amendment rights ought to protect individuals expressing even the most extreme views, so long as they were not directly inciting violence or physically harming others.

"The whole meaning of the First Amendment has been radically shifted since the 1970s. … We are moral beings, we have to think about things in a much deeper way than just [accept] what the Supreme Court says," powell said.

Despite neurological data showing that speech does in fact harm individuals, we've been framing the debates around free speech as if it doesn't, he added.

"That’s their intent. They don’t want a dialogue."

powell added: "The critical question for this country is can we have an inclusive ‘we.’ ‘We the people.’ And there’s some people in power, in the White House, who say 'no'. That’s not simply some people who disagree with me. That’s people saying ‘you are not human. You don’t belong’."

The panel included six people, including powell and Chancellor Christ. The others were Erwin Chemerinsky, the dean of the Berkeley law school; Steven Hayward, a visiting scholar, conservative columnist, and Ronald Reagan Professor of Public Policy at Pepperdine University; Arlie R. Hochschild, a writer and Professor Emerita of Sociology; and David Landreth, Associate Professor of English.

Chemerinsky and Hayward, while ideologically opposed to each other, both argued that UC Berkeley should allow right-wing speakers to visit campus, on legal as well as pragmatic grounds.

The law dean explained that as a public university, UC Berkeley is obliged not only to allow people like Yiannopoulos and Ann Coulter to speak when invited by campus groups to do so, but to also provide them with protection.

"What Milo and Ann Coulter most want is to be kept from speaking on this campus," he added.