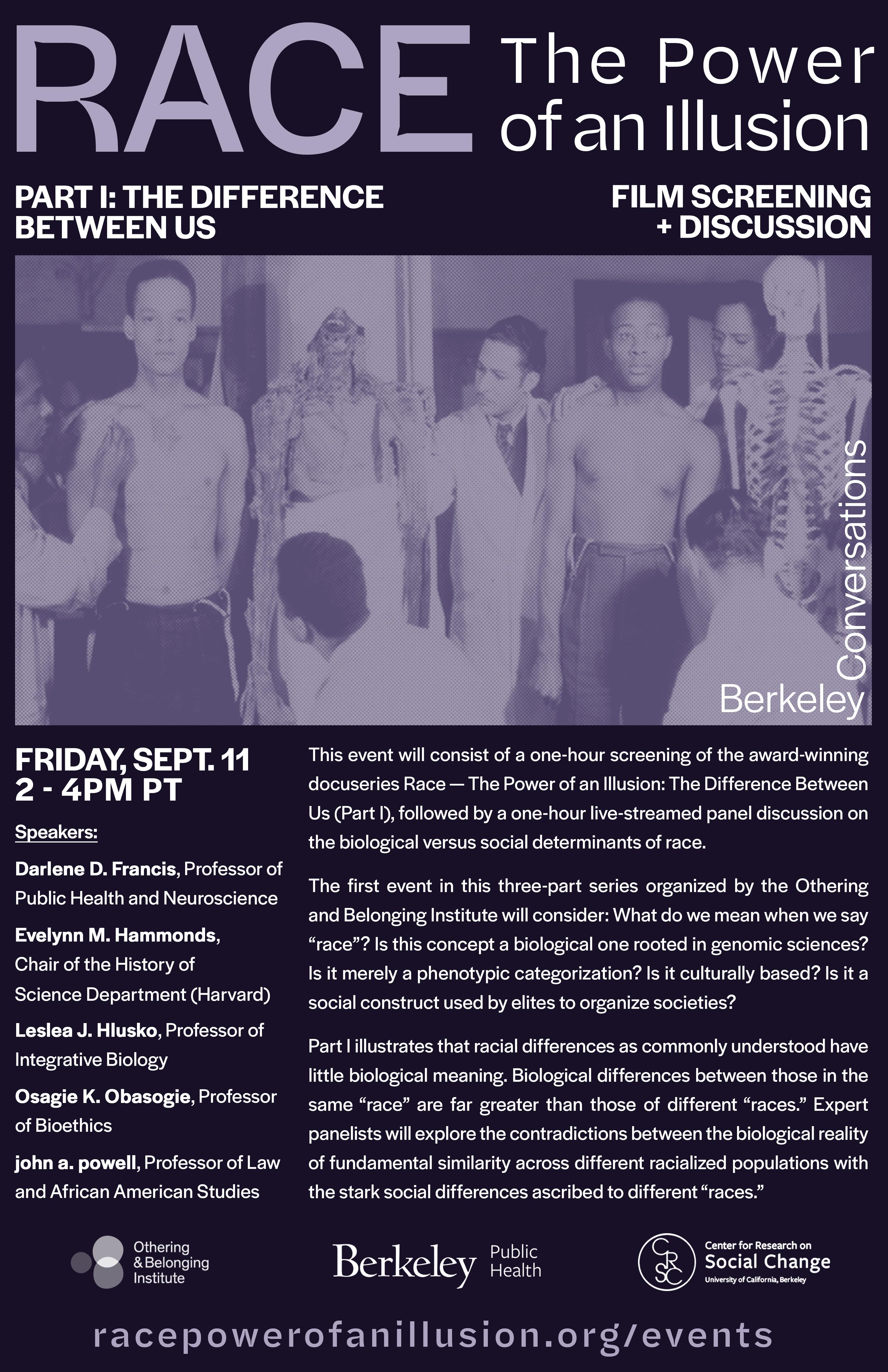 Join us Friday, Sept. 11 from 2pm to 4pm Pacific Time on this page for a screening of Part I of Race—The Power of an Illusion followed by a one-hour panel discussion with experts! RSVP Here.

Note: Members of the UC Berkeley community can access the documentary series at any time for free through Kanopy (https://berkeley.kanopy.com/product/race) using CalNet authentication.

Race—The Power of an Illusion is an award-winning three-part docuseries that provides a comprehensive and nuanced view of the history and uses of race throughout time. More relevant now than ever, the first event in this series, The Difference Between Us (Part I), will consist of a one-hour film screening followed by a one-hour panel discussion and will attempt to answer one foundational question: is race biological or social?

Part I seeks to reveal the complexities involved in what may appear to be a basic concept: What do we mean when we say "race"? Is this concept a biological one rooted in genomic sciences? Is it merely a phenotypic categorization? Is it culturally based? Is it a social construct used by elites to organize societies? The video shows interviews with scientists and ultimately illustrates that racial differences as commonly understood have little biological meaning -- We are all pretty much the same under the skin. In fact, there is greater genetic diversity within a racialized group than between groups.

Following the film screening, expert panelists Darlene Francis (Associate Professor of Public Health and Neuroscience at UC Berkeley), Evelynn Hammonds (Chair, Department of the History of Science at Harvard University; Professor of African and African American Studies and interviewed in Part I), Leslea Hlusko (Professor of Integrative Biology at UC Berkeley), and john powell (Director, Othering & Belonging Institute and Professor of Law, African American Studies, and Ethnic Studies at UC Berkeley) with moderator Osagie Obasogie (Professor of Bioethics at UC Berkeley School of Public Health and the UCB-UCSF Joint Medical Program) will explore the contradictions between the biological reality of fundamental similarity across different populations with the stark social differences ascribed to different "races."

We hope you’ll join us for Part I and future critical conversations during this historical period of mass resistance to structural racism. Part II (September 25) will cover the roots of race and racism in America, as well as how race is used to naturalize inequality. Part III (October 9th) will examine intersections of race with social institutions, power, wealth, and status. Bookmark this page for more information on the upcoming events. All events are free and open to the public.