THE PUERTO RICO DEPARTMENT OF EDUCATION (DE) has closed nearly half of the public schools in Puerto Rico since 2007 (figure 1). Puerto Rico is not alone; there is a broader trend of school closures in districts across the United States, from Philadelphia to Oakland to Washington, DC. But Puerto Rico shuttered an unprecedented 673 schools (44%) in eleven years, far outpacing the rate of change and the number of closures in Chicago (figure 2)—the US school district with the second-largest number of school closures.1 The impact of Puerto Rico’s closures on students, families, and surrounding neighborhoods is profound, yet it has been largely regarded as collateral damage of a necessary restructuring.2 This report analyzes the human impact of the closures, the current state of the schools that have been closed, the response by affected communities, and strategies for a pathway forward.

Schools in Puerto Rico carry particular meaning related to the archipelago’s environmental and historical context.3 Schools serve as essential sites for emergency response and recovery during and after hurricanes. They also serve as central locations to provide other essential community services, such as information and treatment when there is an outbreak of dengue and other illnesses threatening public health. Schools are places of intergenerational relations, where children are connected with elders who often attended the same schools decades earlier and have unique knowledge of the history of their community. Moreover, various generations of schools are part of the archipelago’s cultural heritage due to their invaluable historic and architectural significance, with some schools housing remarkable works of art. In many Puerto Rican communities, the school closures have meant the loss of place for community connection, public health, and resilience. 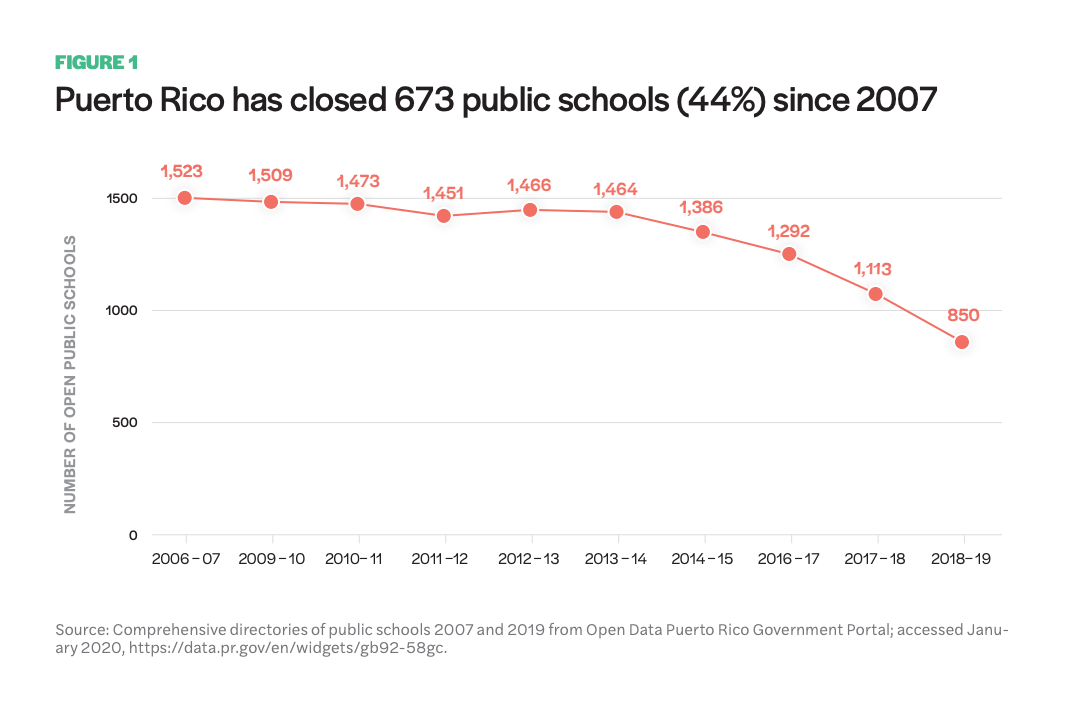 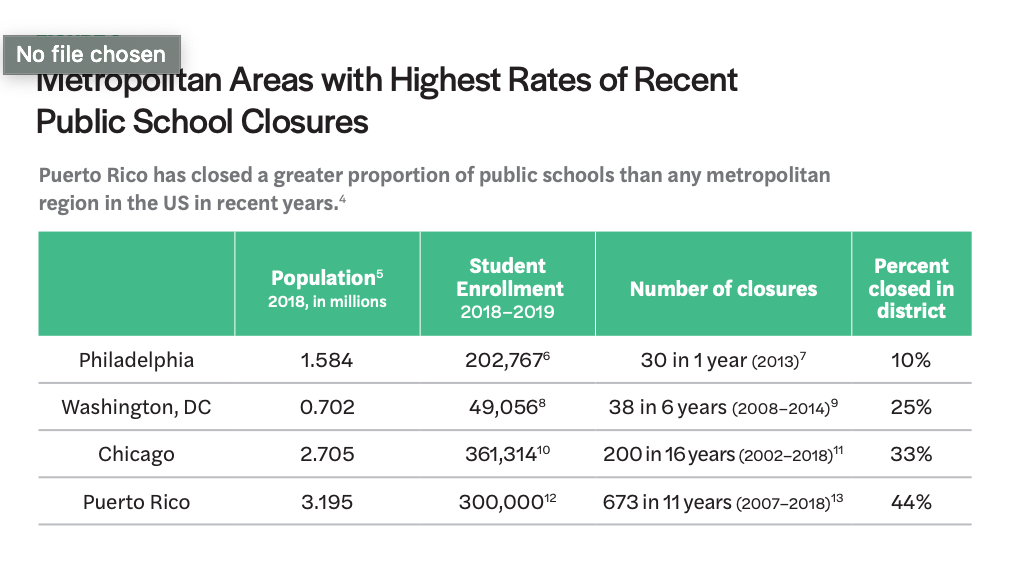 For much of Puerto Rico’s history, schools were run by the Catholic Church and available only to white male children of wealthy families. Following the great expansion of schools that took place beginning in the early twentieth century, education finally became accessible to the vast majority of Puerto Rican children in the 1950s; however, this was mainly as a result of the highly contested US colonial policy of Americanizing Puerto Rican children through the public school system.14 Today’s mass school closures harken back to the period before the 1950s.

Since at least 2007, almost annually the DE announces school closures at the end of the school year, to go into effect the following fall. The Department unilaterally makes decisions regarding which schools to close. Most closures have lacked a transparent process and do not include impacted communities. Moreover, the Department has not implemented any official reassignment process, leaving parents alone with the arduous task to figure out which schools nearby remain open and are accepting new students. Based on conversations with community leaders from various urban and rural communities, the decision to close schools rarely involved affected families, teachers, social workers, or other personnel. Closures were often announced through the press without any comprehensive explanation or criteria used to make such determinations. When asked the reason for the drastic number of school closures, former Secretary of Education Julia Keleher stated, “Every year, we lose 20,000 kids.”15

The wave of school closures over the last decade weakened parent involvement and democratic governance, and limited access to education for children in some areas. In rural areas and some urban neighborhoods, the closures imply a longer commute distance, which increases transportation costs and is a formidable barrier for families without a vehicle or with work schedules that conflict with school start and end times.

The current state of the closed school buildings varies, but most are still under government stewardship and have fallen into disrepair. For this study, researchers conducted site visits to a random selection of 119 closed school buildings, finding a large majority lying vacant, with many suffering abandonment and decay. This study also reviewed 123 publicly available contracts for sale, transfer, or leasing of school buildings from 2014 to 2019, which revealed that only about one-fifth of schools closed since 2007 have been sold or leased in the past five years. Additional site visits to fifty of these contracted schools revealed that only half have actually fulfilled their contracted purposes. (A more detailed explanation of the physical state of visited schools, as well as the corresponding definitions, are included in the section Physical Conditions and Current Use of Closed Schools.)

This evidence of mismanagement of public schools raises wide-reaching concerns, including those related to the Puerto Rican constitution. Similarly to many US state constitutions, but unlike the federal constitution, Puerto Rico’s 1952 constitution defines certain rights to education16:

Every person has the right to an education which shall be directed to the full development of the human personality and to the strengthening of respect for human rights and fundamental freedoms. There shall be a system of free and wholly non-sectarian public education. Instruction in the elementary and secondary schools shall be free and shall be compulsory in the elementary schools to the extent permitted by the facilities of the state. No public property or public funds shall be used for the support of schools or educational institutions other than those of the state. 17

These rights and protections are in tension with a trend across the US of private sector interest in and acquisition of local and state government assets. In particular, this tension arises with the most valuable local government assets, which are transportation, education, and water and sewer. For local governments in the mainland US, the value of buildings and land used for educational purposes constitute the second-largest asset values—second only to highways and streets.18 The total asset value of educational structures is $2.7 trillion—almost 24% of all assets valued in US state and local governments.19 Given this, and the massive public school closures within Puerto Rico, measures are needed to keep those public assets in the public sphere, ensuring they serve public needs and remain accountable to the public. While educational buildings and land are valuable as a whole, the closed schools in Puerto Rico have by and large not been sold (only ten sold out of over 600 closed). Ultimately, school closures produce few savings while they generate substantial and wide-reaching costs and harm to students, families, neighborhoods, and the archipelago as a whole.

Preserving public assets and leveraging them to serve the public interest in Puerto Rico could become a model in how to navigate economic restructuring so that it serves residents and public institutions. This approach to public schools could allo w Puerto Rico to address multiple public challenges it currently faces: extreme economic inequality and persistent poverty, climate change recovery and resilience, population loss, and a struggling education system. Transforming schools into high-quality, community-controlled public schools could be a key strategy for healthy, resilient communities and equitable economic development. This framework applies to both the schools that remain open and the sites of the closed schools. At the closed facilities, the public buildings and land are a unique public resource to be put to use through a participatory community planning process and sustained governmental support.