Goals & Impact: How Did We Measure Up?

Goals & Impact: How Did We Measure Up?

Goal 1: Participants walk away with models, tools, and strategies for operationalizing belonging.

In designing for this goal, we created discrete opportunities such as new, free curriculum, a half-day training on the Blueprint for Belonging curriculum, and the artist-in-residence installation. We also sought solution-focused presenters and session designs that could speak to or demonstrate models, tools, and strategies for operationalizing belonging. For example, with Haben Girma’s presentation, participants’ commented on the power of audience members engaging in conversation with her through technological assistance as a specific demonstration of operationalizing belonging.

The importance of these opportunities is reflected in the one attendee’s comment, that the most valuable part of the conference were the sessions, "that were engaging and talking about tools and ways in which to bridge across different groups." Overall, a majority of respondents (69%) agreed or strongly agreed that they left with models, tools, and strategies.

One challenge of assessing the uptake of models, tools, and strategies is how elements of the conference get used or have ripple-impacts over time. People may not immediately read a presentation as explicitly being a model or strategy, but it may become a point of reference, guidance or inspiration for operationalizing belonging in their work.

Goal 2: Participants explore the concepts of "bridging and breaking"and learn to apply strategies that expand the circle of human concern and create shared, empathetic identities.

86% of respondents agreed or strongly agreed that this goal had been successfully achieved. Directly witnessing bridging take place, such as with the Bridging Generations: Intergenerational Movements, the interracial feminism panel, and the final keynote panel on The Urgency of Bridging were examples of how modeling bridging took place on the stage.

Several of the breakout sessions also focused on building empathetic identities, such as the Operationalizing Bridging and Science, Spirituality and Belonging sessions. One speaker noted how this layering across the conference spaces was impactful, "john powell spoke directly to the ideas of bridging and breaking....The panel that followed him also dealt directly with these concepts and built up from his statements tying everything together which was very effective."

Many respondents also spoke to the impact that specific speakers had in relationship to meeting this goal, such as how keynote speaker Haben Girma created "shared empathetic identities" and one attendee shared how Saru Jarayaman "modeled bridging." 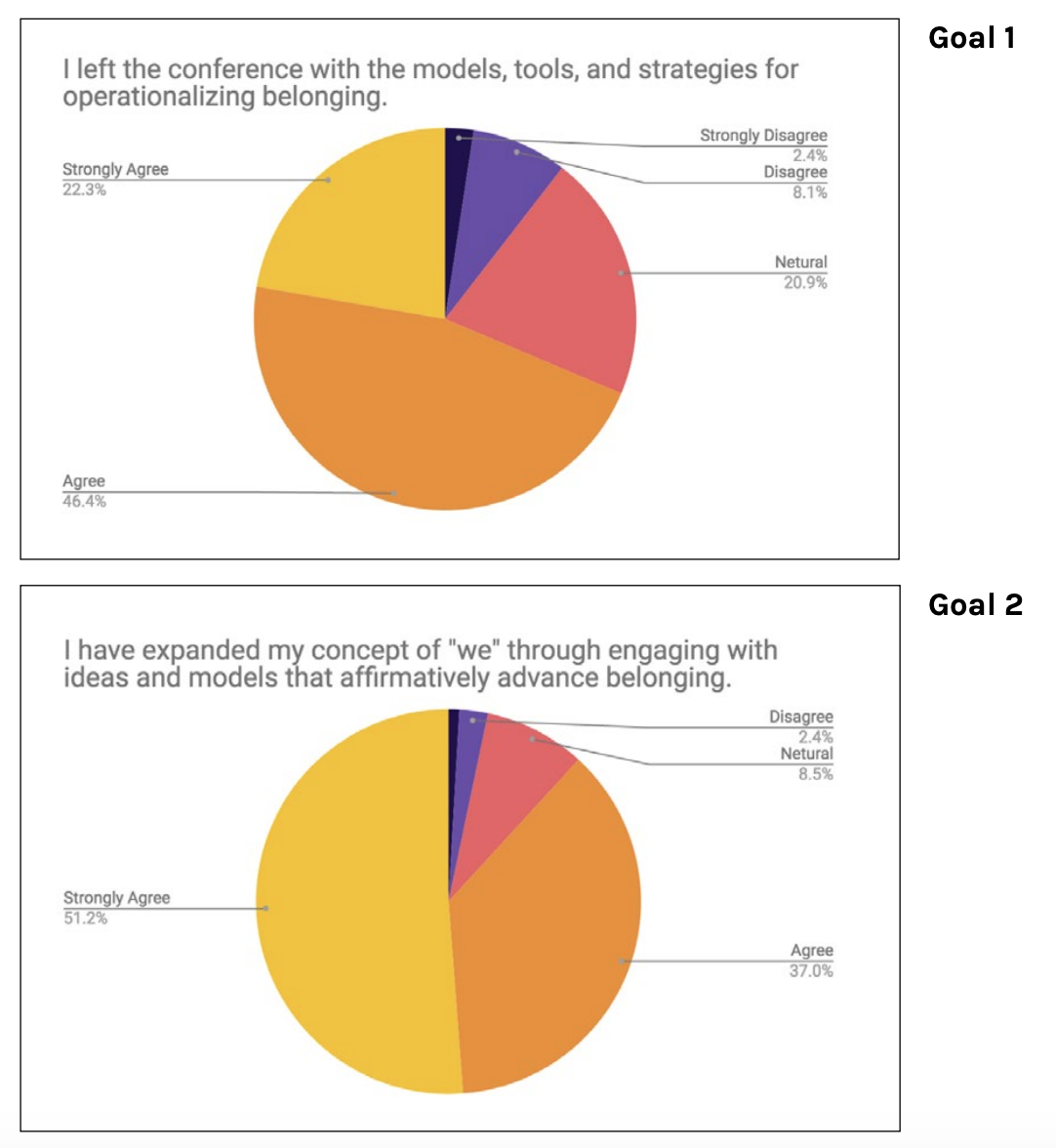 Ten percent of respondents raised questions about the concept of bridging, with a majority expressing a desire and need to have a deeper engagement in the topic. Some felt there was a solid offering of "practical ways to bridge to get things done," others expressed that they wanted to, "role play and practice" as a way of integrating the learning in a way that would deepen their understanding.

Other questions reflected the topics that had been brought up in conference sessions, especially from john powell’s keynote talk: "How to determine which options are better for which situations— soft/hard break and short/long bridging." There was also expressed interest in more specifically learning how to apply the ideas of breaking and bridging in work and community efforts.

Goal 3: Participants expand their "we" through engaging with ideas and models that affirmatively advance belonging.

Over half the attendees strongly agreed this goal had been achieved, with nearly 90% answering affirmatively to this question. Many speakers were identified for their connection to concrete models and forms of analysis that can expand the "we," such as Manuel Pastor’s characterization of the economy in his mainstage conversation on "Building an Economy of Belonging" or the "Will the Future be Feminist? An Inclusive Vision for Belonging." In designing breakout sessions, speakers were asked to focus their presentations around models that advance belonging. As an example, the session on local government and racial equity centered on three policy initiatives that sought to affirmatively advance belonging. The Reproductive Justice breakout session sought to expand who is centered in and leads reproductive justice efforts through a racial analysis. The session on Parenting with Disabilities contributed to a too-often erased aspect of living with disabilities on a topic that is accessible and widely relatable.

The wide base from which presenters and attendees came from created a unique and powerful atmosphere. This was coupled with an appreciation for the diversity of speakers, reflecting an expanded "we" in practice. Several comments were also made on the powerful centering of Native leadership throughout the conference.

Goal 4: Participants make clear connections and comparisons between local and global realities in order to build a truly international movement of belonging

Seven of the 18 breakout sessions had a presenter from outside the US or whose work focused on the connection between global and local. On the mainstage, the Global Migration panel had the most explicit focus on this topic, with speakers from Canada, Honduras, and Mali.

While most of the Haas Institute’s active partnerships are California and US-based, and the bulk of the Institute’s research takes place within a domestic context, the 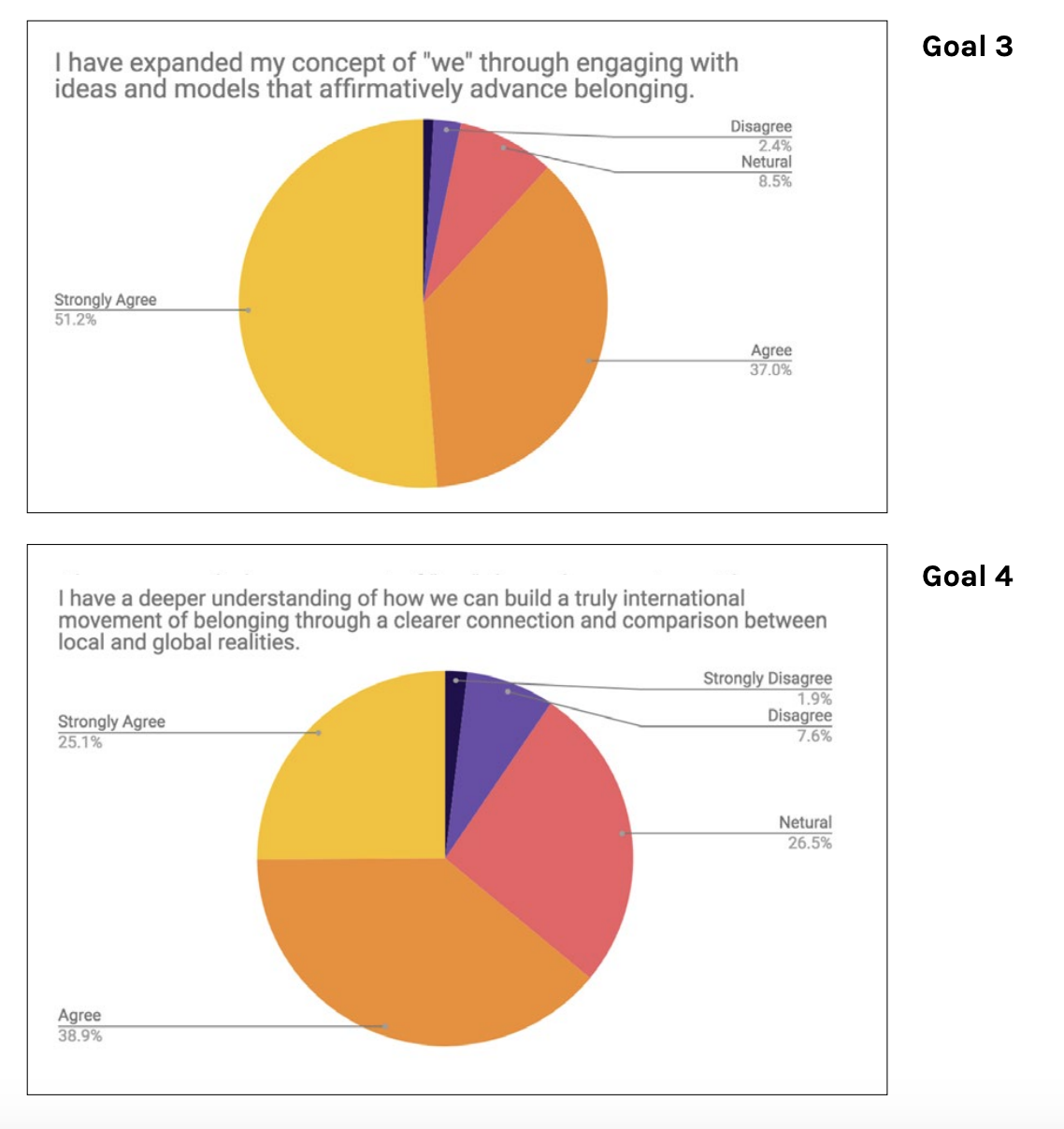