BERKELEY: Across lines of race and ethnicity, majorities of Orange County residents say they support building housing with supportive services for people experiencing homelessness, including in their own neighborhoods, a new survey finds. The apparent rejection of “NIMBYism” corresponds with a dramatic Covid-19-era increase in housing insecurity in the county.

The results were part of the countywide Blueprint for Belonging survey of more than 1,500 Orange County residents designed by the Othering & Belonging Institute at UC Berkeley (OBI). The survey covered a range of topics including inter-group attitudes, views on the proper role of government, economic policy issues, and experiences with the Covid-19 crisis. It was administered in English, Spanish, and Vietnamese between June 28 and August 3, 2020, and includes over-samples of Latinx and Asian and Pacific Islander American (APIA) residents to ensure statistical reliability for these sub-populations.

Overall, 65 percent of Orange County residents said they would support a plan to build housing with supportive services, 24 percent expressed opposition, and 11 percent were unsure. Residents under age 50 were more likely than those 50 and above to support such a plan, at 71 percent and 57 percent, respectively. Support was highest among APIA and Latinx respondents (77 percent and 69 percent, respectively), but also reached a solid majority (58 percent) among whites.

“APIAs are the fastest growing demographic in Orange County, and this survey shows that they express the highest support for building housing with supportive services in the county. The findings also reveal that Covid-19 has exacerbated the current housing crisis for APIAs, just like it has for other communities of color across the county,” said Tracy La, Executive Director of the community organization VietRISE, based in Orange County. “APIAs are often overlooked in opinion surveys and other research, and many do not realize that they increasingly face housing insecurity and houselessness. We see here how much APIAs share in common with other communities of color, and that building more housing with supportive services should be an immediate and high priority for our local government.”

The survey was designed so that half of respondents were asked if they would support the plan for building housing broadly “in your county to serve people experiencing homelessness,” while the other half were asked more specifically about a plan to be enacted “in your neighborhood to serve up to 100 people experiencing homelessness.” This approach allows for analysis of differences in support for a proposal that is more general versus one that is more specific, and closer to home.

“The purpose of the split sample is to look at two things at once. First, it measures support for policy that would assist people experiencing homelessness. But just as importantly, by looking at the difference between support for new housing in the county versus in my neighborhood, it also gauges the prevalence of othering against the unhoused,” said Olivia Araiza, director of the Blueprint for Belonging project at OBI.

The results suggest that such othering is much less common than might be expected. Among Orange County residents, 68 percent of those who were asked about building housing with supportive services for the unhoused in the county expressed support. Of those asked about building housing for up to 100 individuals in the neighborhood, 62 percent expressed support. By way of comparison, a January survey of Bay Area residents found a 16-point fall in support for a proposal to create new permanent housing for the unhoused when the phrase “within a half mile of your home” was added. 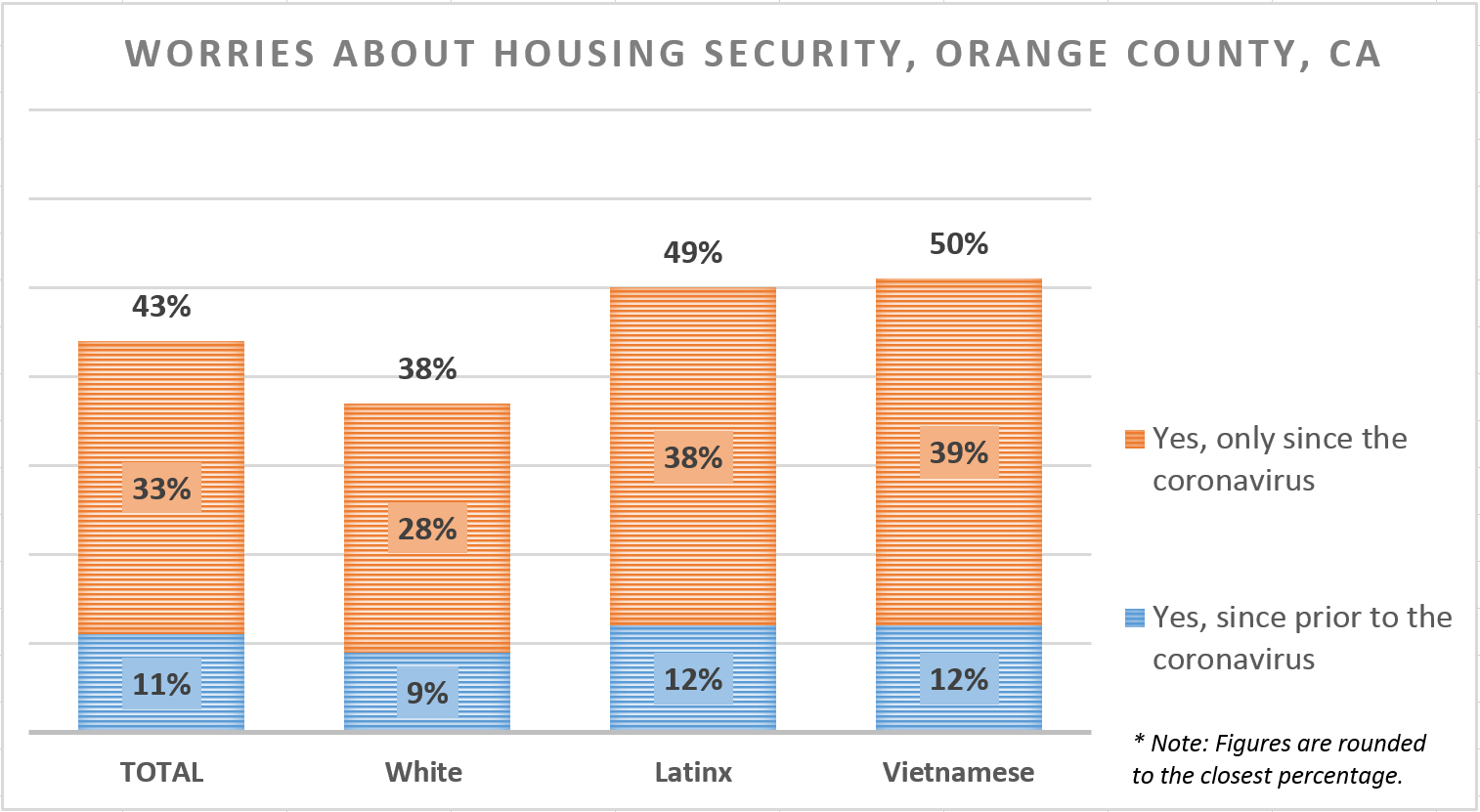 Although Orange County residents’ overall support for creating new housing was lower than those in the Bay Area poll, among those who support new housing services, a very small share takes the NIMBY (“Not in my backyard”) position. This “NIMBY drop off” of just six percentage points was relatively steady across Orange County’s diverse race/ethnicity groups.

What is more notable is that the drop off evaporates entirely among the housing insecure. Survey respondents were asked, “Thinking about the last 12 months, have you ever been worried that you won’t be able to make the next month’s rent or mortgage payment?” Among those who answered “yes,” a steady 69 percent supported building housing for people experiencing homelessness—irrespective of whether or not “in your neighborhood” was specified. Another survey question asked, “How concerned are you that in the coming year you will have to move out of your home for reasons outside your control?” Those who answered “extremely” or “moderately” actually had a higher likelihood of supporting the building of housing and supportive services for the unhoused in their neighborhood than in the county generically.

“With Covid-19, everyone is feeling the pinch, especially in Latinx communities in Orange County. The fact is that the inequalities and housing insecurity that existed before the pandemic have been exacerbated. One result is that people have a new understanding of the factors that contribute to the growing homelessness crisis. These survey findings show that when housing insecurity impacts you directly, you come to empathize more deeply with others,” said Apolonio Morales, External Affairs Director for the Coalition for Humane Immigrant Rights (CHIRLA), which works in South Orange County. He continued, “The feeling of being on the edge of losing your home is surely taking its toll on families and their mental health. Only large systemic change to make housing affordable can mitigate the impending disaster.”

The survey showed that housing insecurity has shot up in Orange County since the onset of the Covid-19 crisis. Overall, 43 percent of respondents reported that they have worried in the past year about making the next month’s rent or mortgage payment. But of these, three out of four said such worries began “only since the coronavirus.” Among Latinxs, 49 percent have worried about their housing stability in the past year, 12 percent before and nearly 38 percent only since the outbreak of the pandemic. Just over 50 percent of Vietnamese respondents have felt housing insecure, and here too, this is a dramatic jump from the just 12 percent who said this insecurity dates to before the coronavirus outbreak.