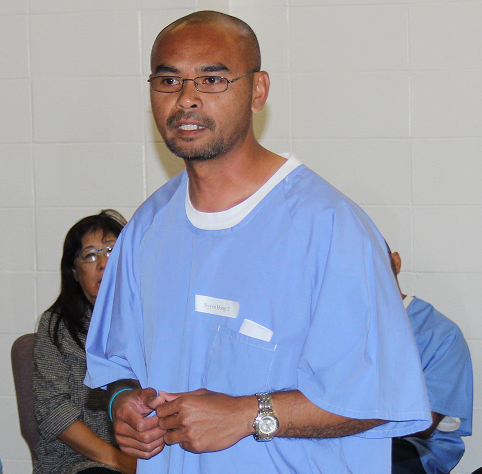 Syyen Hong is a currently incarcerated individual held at San Quentin Prison in California. He was convicted and received a life sentence at age 17 for participating in a gang-related drive-by shooting. Today, he is 38 years old and anticipating his release from prison. This is Syyen’s story of growing up an immigrant in the US and being behind bars for over 21 years.

I was born in Cambodia in a Khmer Rouge labor camp. During the four-year reign of the Khmer Rouge, it is estimated that two million Cambodians perished from starvation or illness, or were murdered by the regime. My family and I were fortunate to escape to Thailand, where we resided in refugee camps. I was three years old when I first set foot in the United States. Sponsored by a Mormon family, my family landed in Salt Lake City, Utah in 1980. For reasons unknown to me, my father didn’t come along and is still living in Cambodia. My mother remarried when I was five. I was happy to have someone to call my father. Yet two years later, when my younger brother was born, I realized he was not really my father, because of the difference in the way my new brother and I were treated.

I had a rough transition when I started kindergarten. English was not my first language and I didn’t look like the rest of the kids in my class. After five years in Utah, my mother decided to move to Long Beach, California to be close to other relatives. Long Beach was totally different from Salt Lake City. We lived in a cramped house with 16 people. My mother relied on government assistance. I went from sharing a room with my older sister to sleeping on the living room floor with 10 other relatives. I grew up in an area of Long Beach where there were a lot of gangs and criminal activities.

During that time, the Cambodian and Mexican gangs were constantly at war. When I was nine, I was exposed to the gang lifestyle by my uncle Chuck, who was eight years older than me and a gang member. One day, my uncle rounded up a group of about 15 people, armed with nunchucks, knives, bats, and clubs, to retaliate against some others who they believed stole some of our bicycles. My uncle told me to remain at home, but I didn’t heed his order. Instead, I followed closely behind, not wanting to miss the action. I felt that the gang had power and I wanted to be a part of it. In 1992, after rival gang members shot at my grandparents’ home, they decided to move to Las Vegas and my mother decided to move us to Whittier, California. I never adjusted in Whittier. I didn’t have many friends except for a Filipino guy named Eddie, who was from Sacramento. In 1995, my uncle Steve, who was three years older than me, came to live with us in Whittier. I looked up to Steve, who was also a gang member. Our uncle-nephew relationship evolved into a two-man gang. Steve and I bought, sold, and used drugs together. On March 21, 1995, Steve came to pick me up from school. A parade of vehicles drove up, members of the local rival gang. One of them flashed a gang sign at Steve, and he replied by flipping a middle finger at them. They rushed at us. I remember fighting with three of them and found myself on the ground, curled into a ball to protect myself from being stomped to death. Eddie saw the commotion and came to our aide. The fight lasted for a few minutes, and stopped when someone shouted, “The cops are coming!”

I was angry and wanted retaliation. The following day, I drove around town, with Steve in the passenger’s seat with a loaded shotgun. Nothing happened that day. The next day, at about three in the afternoon, on March 23, 1995, we drove around again. With Steve in the passenger’s seat and Eddie in the backseat, we went looking for those who had assaulted us days earlier. School was out. I spotted a guy named Chuy that attended my school. I didn’t care that he was walking with other students. He was a member of the rival gang that I hated. Someone was going to pay for all the times I was bullied. Someone was going to pay for all the times I was called names. Someone was going to pay for all the times I was shot at. It was finally my turn to make a statement. As I drove near the students, I pulled the car near the curb and Steve opened fire upon the group. Immediately afterwards, we drove to San Pedro, a city fifty miles away. The next day I found out that a guy named Richard was killed in our attack, and three others were injured. I knew Richard because we had shared a few classes together during my freshman year. He was not involved in the original fight, and he was not a gang member. It dawned on me that I was responsible for killing an innocent person. My conscience told me that I should turn myself in, but I was too much of a coward. I went home and told my parents that Steve and I had got into an altercation with Mexican gang members and there was a chance that they were going to retaliate. I never told them that we had killed someone. They agreed to let me go to Las Vegas to stay with my grandparents until everything settled down.

It dawned on me that I was responsible for killing an innocent person. My conscience told me that I should turn myself in, but I was too much of a coward. I went home and told my parents that Steve and I had got into an altercation with Mexican gang members and there was a chance that they were going to retaliate. I never told them that we had killed someone. They agreed to let me go to Las Vegas to stay with my grandparents until everything settled down. Eight days after the shooting, Steve and I were arrested by the Los Angeles homicide division and the Las Vegas FBI. I was eventually convicted of second degree murder, under the aiding and abetting law, and sentenced to 15 years to life. Steve was convicted of first degree murder and was sentenced 25 years to life. Eddie was released on the condition of testifying against Steve and me.

During the first years of my incarceration, I didn’t have time to think about why I came to prison. I was too busy trying to survive.

I was assaulted and participated in riots and assaulting other inmates. I had no hope of ever getting out and behaved recklessly. I became a worse criminal in prison than when I was living in society. I sold, used, bought, and smuggled drugs and other contraband. I fought and assaulted others. Despite my behavior, my mother and sister have supported me throughout the 21 years of my incarceration. It was my faith in God and having that family support that kept me from losing all hope.

In 2011, I made a commitment to follow Christ and from then, I have been on the path of rehabilitation. I served as Secretary for the Criminals and Gang Members Anonymous, a self-help group that assists inmates in addressing their destructive gang and criminal behavior. I am one of the original founding members of this group at San Quentin, but it is now available in more than 20 institutions. Through this program I have come to understand the factors that led to my gang and criminal lifestyle. I was denied parole three times due to my prison conduct, but on March 3, 2016, I went before the parole board and was found suitable for parole.

I also had a detainer from the Immigration Custody Enforcement (ICE), which was recently lifted, and I was declared a U.S. citizen. I had a friend through the Restoring Our Original True Selves (ROOTS) program, who is an immigration lawyer, who helped me file a petition proving that I am a derivative citizen through my mother. The lives of many of my friends have been deeply affected by the immigration system. I have friends who have been deported to Cambodia, and some of them don’t even speak the language because they have been in the US for most of their lives. Yet some will never be reunited with their families in the US. Having been affected by the issue of deportation myself, I plan to be a voice for those who are unable to speak out on their own behalf. I am expected to be released in August. Upon my release, I want to enroll in San Francisco State University and pursue a B.A. through a program called Project Rebound that helps the formerly incarcerated get accepted into the university. I have written an autobiography which I hope will become published, and I want to use any profits from my story to support victims’ rights unions and troubled youth programs, especially those that are geared towards anti-gang violence.

I have been incarcerated for a little over 21 years. By the lifestyle that I led, I should have been dead or on death row. But I believe that people can change.

If an individual makes a change in their life and works toward becoming a productive citizen, they should be given a second chance. I have harmed a lot of people because of my careless actions. I held a lot of anger and resentment and didn’t know how to deal with it. As a result, I committed a tragic and senseless crime in which an innocent seventeen-year old high school student was killed while walking home from school. I understand that, to this day, the community of Whittier is still affected by what I did. Even though I can never undo the harm that I’ve caused, I can at least make positive contributions to society. I can use my life experience to help many people. I have been a victim and perpetrator. Today, I can truly say that I am victor.