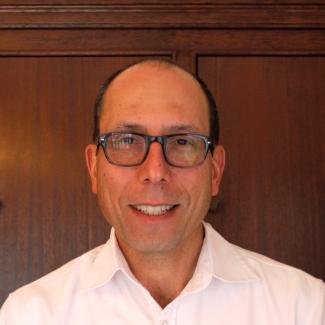 Jonathan Simon is an Adrian Kragen Professor of Law at UC Berkeley and a member of the Haas Institute’s Diversity and Democracy research cluster. He shares with us his perspective and research on mass incarceration, how it’s measured, and how it’s discernable from other forms of incarceration.

I see mass incarceration as distinct from earlier periods of American incarceration practices in three dimensions. Firstly, the quantum shift in the scale of incarceration from about 100 Americans imprisoned for every 100,000 people, to over 400 per 100,000 in the population. Changes of this scale in large social institutions almost always indicate some kind of fundamental change in society. Secondly, a shift in the administration of imprisonment from individualized sentencing (where prison is a selective process) to a collective process where whole groups are deemed presumptively appropriate for incarceration (drug sellers, parole violators, etc.).

Of course we’ve had episodes of that in the past, like the convict leasing system that prioritized imprisonment for African Americans as a way of replacing slavery, but never on a national basis, and not since we adopted the legal structure of equal citizenship in the 1960s by ending Jim Crow. Thirdly, a qualitative shift from the post-World War II emphasis on rehabilitation and a corresponding emphasis on investing in improved prison conditions, to a commitment to an extreme form of incapacitation with a corresponding emphasis on warehousing as many people as possible in prisons that are overcrowded, lacking in programs or even decent health care, and increasingly degrading. Some historians would say I’m painting too nice a picture of premass incarceration conditions, but even so, the degree of shift is undeniable.

I’ve seen some significant action to reform the situation, especially related to extreme isolation prisons, which typically keep prisoners in their cell 24 hours a day, with perhaps one hour a day out to shower or “exercise” in an open air version of the same cell space. These prisons are often held up by prison managers as an exceptional tool that allows them to isolate dangerous prisoners and keep other prisons more open for programming. However, in California and in many other states they have become a structural part of an entire prison regime based on warehousing people, these are extreme versions of what is at its core a deeply inhumane approach to imprisonment. Thus the effort to end and outlaw this form of imprisonment is much more important than even the large scale of these prisons would suggest—eliminating them would force deep changes in entire prison systems.

Fortunately there have been some major steps toward this goal, and the pressure is coming from multiple fronts. Perhaps the most praiseworthy comes from prisoners themselves. In recent years, supermax prisoners in California mounted hunger strikes that spread through the entire prison system—in 2013 some 30,000 prisoners were rejecting meals at one point—which brought considerable public attention and even legislative hearings. Lawsuits against supermax prisons are achieving significant success with both New York and now California settling lawsuits challenging prolonged confinement in supermax units.

Additionally, a growing amount of media attention to supermax is raising public awareness, and given the current climate of reform, this is laying the groundwork for further advances toward ending this practice. The second front of action is toward reducing reliance on prison in the first place. In this way, California, forced by the Supreme Court in Brown v. Plata to reduce its prison population by about 40,000 people, is probably the national leader having adopted a body of laws that prevents trial courts from sentencing most low-level felonies to terms of imprisonment.

The third front is clemency, or executive action, to free current prisoners. This is important both to relieve overcrowding and as a starting point for sentencing reform by exposing the folly of current sentences. President Obama can claim the lion’s share of credit with his high visibility clemency program for federal prisoners serving prolonged sentences for nonviolent drug crimes. The problem here is that the President’s clemency program has released fewer than 100 prisoners, out of more than 30,000 who might meet his criteria.

While much progress has been made toward delegitimizing long, or any, prison terms for drug crimes, virtually none has been made toward shaking the commitment to long prison terms for more serious or violent crime. Yet the very same criticisms apply. While some prison may be warranted in the case of criminals that cause or threaten serious injury to other people, and may be justified in the case of serious property crimes when lesser sanctions have no impact, there is no penological justification for the very long sentences that crimes like burglary, robbery, and murder now attract.

Take murder: few would doubt that someone who intentionally kills another person without legal justification should be removed from the community for some time—but for how long? In the civilized world, almost no one serves more than 25 or 30—indeed, in most of the world 10 or 15 years is not atypical for murder. Yet in California, those lucky enough to win parole have typically served 30 or more years. I would like to see states adopt a 20- year limit on how long someone can be held in prison without specific reasons to believe that they pose a continuing threat. For lesser crimes, sentences should rarely be more than 5 years. There is very little evidence of deterrent effects beyond a few years, and the natural desistance from crime that almost invariably comes with aging means that incapacitating someone for decades is pointless.

When it comes to immigration, many now note that our country’s immigration enforcement resembles typical law enforcement, and that are immigrant communities are being overly criminalized. I consider mass deportation and the routine use of detention to support it, an integral part of mass incarceration and just as urgent a priority for uprooting and outlawing. Indeed, because violence is such a powerful and capacious concept that tends to link very different things, the rise of global terrorism since September 2001 has added considerably to the fear of immigrants, even though it has nothing to do with it.

I believe the solution is the same for both ending mass incarceration and mass deportations—a one, two punch of dignity and rationality. Dignity is the first punch. As long as the victims of mass incarceration or deportation are denied their essential human dignity, anything can be justified in the name of “security.”

As with prisoners, we need to bring out the stories of how deportation of immigrants ravages children, families, and communities, denying them the presence of individuals that provide essential contributions to their humanity. We need to insist that whatever measures are taken in response to either crimes or violations of the immigration laws, that those measures respect the human dignity of those subject to enforcement and those connected to them. The second punch is rationality. While people of reason can differ on what our immigration policies should be, there is no rational justification for the mass reliance on deportation and detention we adopted in the 1990s.

One of the most encouraging signs is the fact that the growing movements against mass incarceration and mass deportation are increasingly aligning and coordinating. It is easy to imagine that those fighting deportations would emphasize their innocence of any crimes (in the first wave of big demonstrations against deportations a few years ago, slogans like “we are not criminals” were commonly seen). And likewise, those fighting mass incarceration might easily see benefit in the nation’s fear-based politics turning to the borders. But instead, understanding the common ground of dignity can support both struggles, I have seen clear evidence that activists in both causes are refraining from strategies that would demonize the Other, an instead are seeking a common vision of a more just and inclusive society.