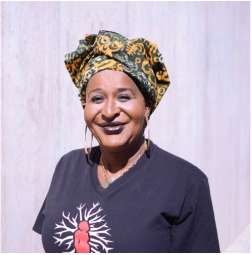 Janetta Johnson is the executive director of Transgender, Gendervariant, Intersex Justice Project (TGI Justice Project), a group of transgender, gender variant and intersex individuals inside and outside of prisons, jails, and detention centers who are working to create a united family in the struggle for survival and freedom.

I moved to San Francisco in 1997. When the economy tanked in 2008, I panicked and made the decision to sell drugs to survive. I ultimately spent four years in federal prison for this decision. While I was in custody, I made it my business to do outreach with trans people, to explore how we can stop the cycle of incarceration by identifying behaviors that put us here and the barriers that we face outside to create a better quality of living.

While I had previously worked with the TGI Justice Project (in fact, I had moved to San Franciso to be mentored by Miss Major, TGI’s former executive director), it wasn’t until after those four years in prison that I decided to focus solely on the support for trans people getting out of being incarcerated and creating a better life for ourselves. Trans and gender nonconforming individuals face a unique form of violence that is based solely on their gender orientation. It’s always been about somebody else not being comfortable with a trans individual’s gender orientation. It’s not like we’re inciting violence towards others. People use the “I didn’t know defense” and that’s bullshit. People are aware of who we are, it’s a matter of people making the decision that they want to be in some type of relationship with us, and then they change their mind. A big part of this culture of heteronormativity is what leads to violence.

Once, I was in Atlanta, minding my own business, and there was this man and woman nearby. The woman started to make negative, transphobic comments towards me. I felt like she was trying to incite her boyfriend to commit violence towards me, but her boyfriend was saying, “Why you harassing that person? That person isn’t bothering anyone.” She was upset with him because he didn’t agree with her harassing me. He would not go along with her heckling me. People perpetuate violence towards us because of their own ignorance and prejudice towards us, but they also incite others to be violent towards us.

I’ve also had numerous acts of violence inflicted upon me by police and other representatives within the criminal justice system. Usually the first thing that comes with that is misgendering us. People make it their business to use the wrong gender. That is the beginning of the process of abuse and the trauma. It’s important to note that the act of misgendering always comes before a physical attack. While there is much discussion about violence towards trans folks on an individual level, looking at the system is important.

And the incarceration system begins with the correctional officer. Correctional officers treat trans people very poorly and show prejudice and hate towards us with no concern for our safety. Having people search your body and laugh at your body and make fun of your body parts, calling you he/she/it — that’s a verbal attack. It brings up anxiety and panic and a sense of unsafety. Officers would put us in a cell with people who have already expressed that they will hurt us. Their behavior puts us at risk in other ways, especially from other inmates, who begin to realize that they can get things if they’re not nice to us. If a straight guy was cool with a trans person and we got along, that will change once they realize that hanging out with us will make them lose favors that they might get otherwise. Then they stop being cool with us. Once the other inmates see how poorly the officers see you, it makes you a target and that can lead to physical attacks. Inmates may think they would be doing the officer a favor by violating you physically or sexually.

While I was serving time, I worked as a referral liaison to the TGI Justice Project. We got people involved in political education and empowerment, taught about the criminal justice system and how to not put ourselves at risk for becoming incarcerated in the future. Because of the constant misgendering by correctional officers, I wrote to a federal judge, explaining how language affects us. The judge sent federal marshalls to the jail and forbade them from misgendering trans people. I filed complaints and shared my story and advocated for culturally competent health care for trans people. Anything I could do to be supportive and awaken the trans community to use whatever little power we might have, I did.

After doing my time, I set two goals for myself: to work for TGI Justice and to one day become the executive director of the organization, continuing Miss Major’s work. Miss Major is my mother, my role model, and the one who taught me how to fight, how to find my voice, and how to use that voice. And now here I am, the executive director of TGI Justice Project. We’re working to create job opportunities, build leadership development, and fighting for economic justice. A recent example is when the city and county of San Francisco gave a strong recommendation that each organization receiving city and county funding should reflect the local demographics.

The staff should reflect the population because that’s a population they serve in large numbers. We’re trying to enforce rules like that and call out different organizations and entities to make sure that’s happening.

This is not only to focus on safety for trans people, but also economic justice. The biggest challenge facing formerly incarcerated trans folks is access to mental health care. There is not an easy pipeline from prison to mental health care. If someone’s in prison, therapy is not always a safe place to be, because if you have problems, often the only solution is to lock you up. When you get out, it’s very hard for many people to open up because they’ve been conditioned to fear being placed in the Secure Housing Unit (SHU) in prison. SHU is the same place you go if you have a disciplinary problem. If you’ve been sexually assaulted, you go to the same SHU, with the same rules and regulations as those who are getting punished. Officials say they use it for our protection, but it’s a form of punishment. Working on access to mental health care is critical for the fight for justice for trans people.

When it comes to the intersection of mass incarceration and immigration, I think both systems should be fought together, hand in hand. If we don’t dismantle both systems at the same time, it’s impossible for us to abolish the systems of oppression that do not let people get back on their feet. They are both spiraling systems that needs to be dismantled altogether and at the same time.