Haas Institute co-releases new report with the Perception Institute and leading social scientists with proven solutions to reduce the effects of implicit and explicit gender bias in the media, workplaces, schools, and communities.

Berkeley/October 27, 2016: Ahead of the historic 2016 Presidential Election, the Haas Institute is pleased to co-release today with the Perception Institute the Science of Equality Volume 2: The Effect of Gender Roles, Implicit Bias, and Stereotype Threat on the Lives of Women and Girls, a groundbreaking report drawing upon decades of research in social psychology to understand the mechanisms that explain why gender disparities persist in all areas of our lives despite generally accepted norms of gender equality.

Director of the Haas Institute for a Fair and Inclusive Society john a. powell is a co-author of the new report, along with Rachel D. Godsil, Director of Research for Perception Institute, and leading social psychologists Linda R. Tropp, Professor of Psychology and Brain Sciences at the University of Massachusetts, Amherst and Phillip Atiba Goff, President of the Center for Police Equity. 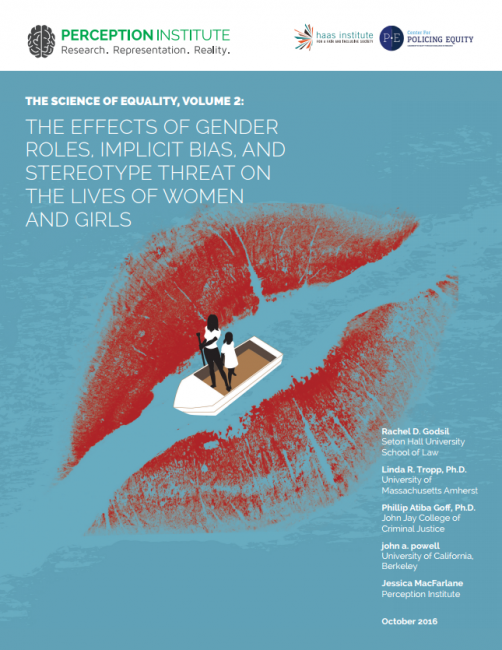 The report focuses on how gender bias plays out across various domains, including in the media, workplaces, communities, schools, and our homes. Building upon the Perception Institute’s inaugural Science of Equality Volume 1: Addressing Implicit Bias, Racial Anxiety, and Stereotype Threat in Education and Healthcare, this new  report addresses gender as it intersects with race and ethnicity, exploring the different stereotypes associated with black women, Latina women, Asian-American women, and white women. The report examines how women navigate these stereotypes and highlights interventions to reduce the harm of implicit bias and stereotyping.

"As this election season has made abundantly clear, gender bias still impacts women and girls tremendously and shapes how we navigate the world. Nearly every woman in this country has felt the discomfort of gender bias at some point in her life, either explicitly or implicitly, and even the well-intentioned can be guilty of perpetuating bias. Now, by raising awareness and offering practical solutions, we hope to provide both women and men with the tools to properly confront and counter bias.”

Some key insights from the report include:

The full Science of Equality Volume 2: The Effect of Gender Roles, Implicit Bias, and Stereotype Threat on the Lives of Women and Girls report can be downloaded at https://perception.org/publications/science-of-equality-vol-2/.

The Perception Institute is a consortium of researchers, advocates, and strategists that uses cutting-edge mind science research to reduce discrimination and other harms linked to race, gender, and other identity differences. Working in areas where bias has the most profound impact—education, health care, law enforcement and civil justice, and the workplace—Perception Institute designs interventions, evaluations, communications strategies, and trainings. Turning research into remedies, Perception Institute crafts real-world solutions for everyday relationships. To follow Perception Institute’s work, please visit perception.org.