Co-Organized with Center for Research on Social Change, College of Natural Resources, Department of Environmental Science, Policy, and Management; and Berkeley Food Institute 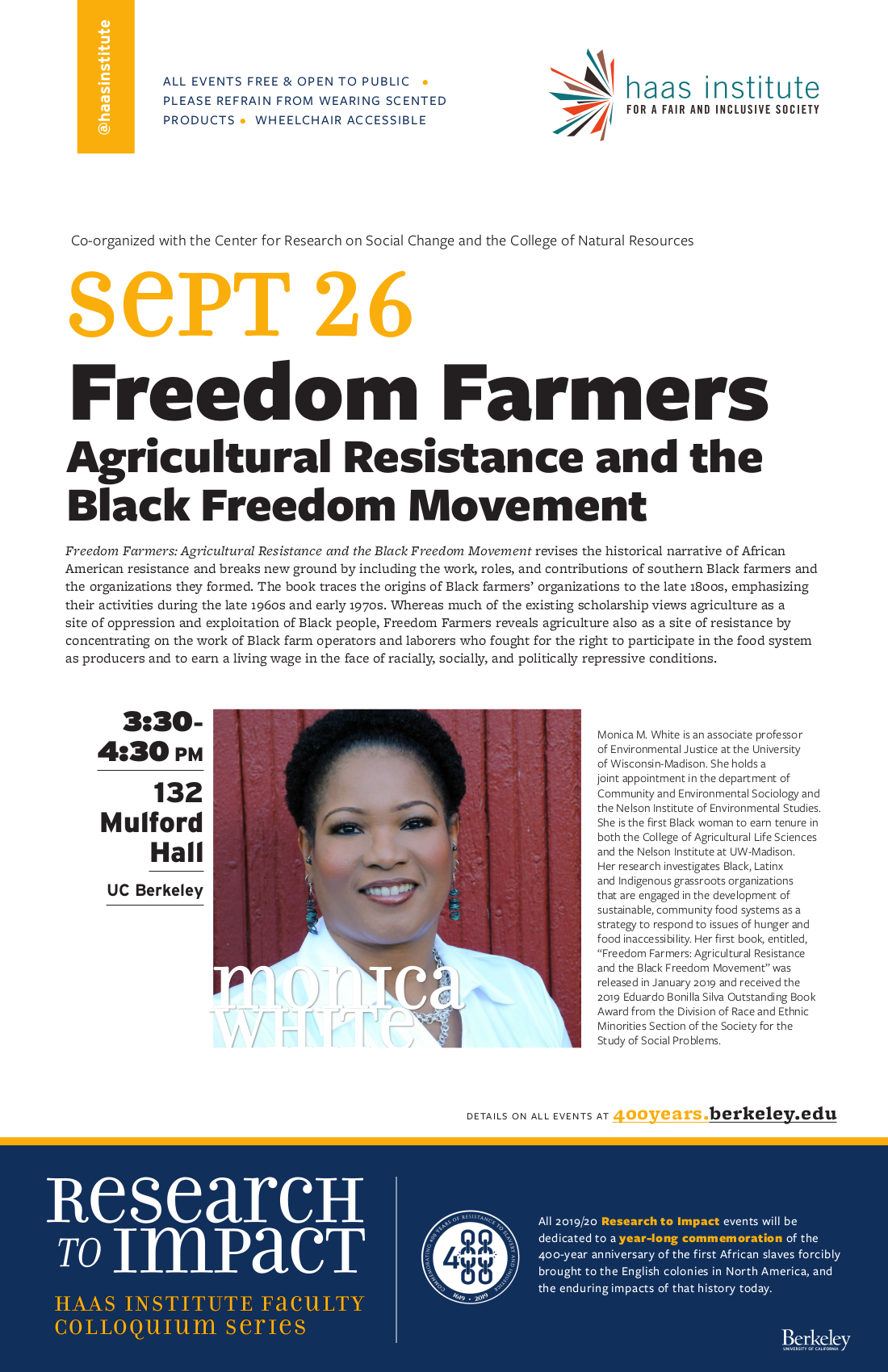 Monica M. White is an associate professor of Environmental Justice at the University of Wisconsin-Madison. She holds a joint appointment in the department of Community and Environmental Sociology and the Nelson Institute of Environmental Studies. She is the first Black woman to earn tenure in both the College of Agricultural Life Sciences (1889) and the Nelson Institute (1970) at UW-Madison. Her research investigates Black, Latinx and Indigenous grassroots organizations that are engaged in the development of sustainable, community food systems as a strategy to respond to issues of hunger and food inaccessibility. Her recent publications include “A Pig and a Garden: Fannie Lou Hamer and the Freedom Farms Cooperative,” in Food and Foodways: Explorations in the History and Culture of Human Nourishment. Her first book, entitled, “Freedom Farmers: Agricultural Resistance and the Black Freedom Movement,” published with University of North Carolina Press, was released January 2019 and received the 2019 Eduardo Bonilla Silva Outstanding Book Award from the Division of Race and Ethnic Minorities Section of the Society for the Study of Social Problems.

Freedom Farmers: Agricultural Resistance and the Black Freedom Movement revises the historical narrative of African American resistance and breaks new ground by including the work, roles, and contributions of southern Black farmers and the organizations they formed. The book traces the origins of Black farmers’ organizations to the late 1800s, emphasizing their activities during the late 1960s and early 1970s. Whereas much of the existing scholarship views agriculture as a site of oppression and exploitation of Black people, Freedom Farmers reveals agriculture also as a site of resistance by concentrating on the work of Black farm operators and laborers who fought for the right to participate in the food system as producers and to earn a living wage in the face of racially, socially, and politically repressive conditions. Moreover, it provides an historical foundation that will add meaning and context for current conversations regarding the resurgence of agriculture in the context of food justice/sovereignty movements in urban spaces like Detroit, Chicago, Milwaukee, New York City, and New Orleans.

In addition to her academic work, she is the past President of the Board of Directors of the Detroit Black Community Food Security Network (DBCFSN), and has served on the advisory board of SAAFON (Southeast African American Farmers Organic Network). Active in the food justice movement for over a decade, especially active in Detroit with the DBCFSN, her work in the classroom and community embodies the theoretical framework of Collective Agency and Community Resilience and the use of community-based food systems and agriculture as a strategy of community development.

As a result of her scholarship and community work, Dr. White has received several grants including a multi-year, multi-million dollar USDA research grant to study food insecurity in Michigan. She has also received several teaching and service awards including the 2013 Olsen Award for distinguished service to the practice of Sociology from the Michigan Sociological Association and the Michigan Campus Compact Faculty/Staff Community Service-Learning Award. She was appointed tothe Food Justice Task Force sponsored by the Institute for Agricultural Trade Policy (IATP), maintains a quarterly column for the Journal of Agriculture, Food Systems and Community Development (JAFSCD) and has presented her work at many national and international community organizations, colleges and universities.