A Message from Director of the Haas Institute 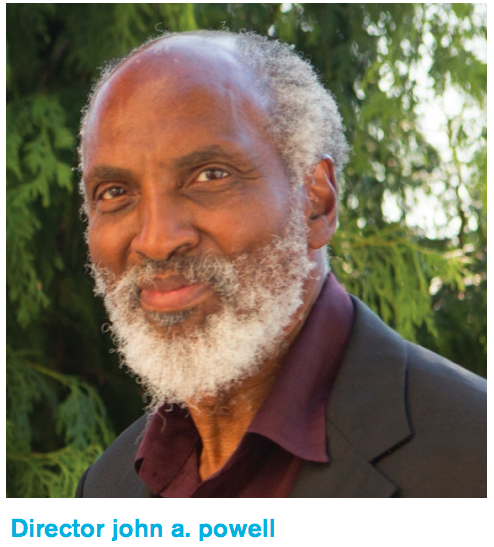 “OTHERING AND BELONGING” and “Targeted Universalism” are two of our most  potent frameworks, and in the last year, we have made a decisive move towards more deeply articulating and implementing them as conceptual frameworks and applied policy interventions.

When Stephen Menendian and I first published “The Problem of Othering: Towards Inclusiveness and Belonging” in the first issue of our Othering and Belonging Journal (otheringandbelonging.org) a few years ago, readers noted that most of the article was focused on othering. Even the section on belonging was more about what failed to constitute an authentic belonging intervention and therefore focused primarily on othering.The practice of othering in the form of racial hierarchy, gender bias, disability bias, and anti-immigrant sentiment is widespread. Yet there remained and remains a need to better understand and practice belonging.This is a gap we have been busy attending to across our work at the Institute. If most of our energy since we opened the Institute in 2012 was focused on articulating, defining, and descriptively identifying the patterns and mechanisms of othering—and remediating them—we have undertaken a remarkable pivot in the last year towards belonging. As will be evident in this year’s Othering & Belonging Conference in April, our recent  explainer video on bridging (highlighted on page 8), our Artist in Residence program investigating belonging (featured on page 26), and the recent launch of our Blueprint for Belonging curriculum, we dove headfirst into belonging.

There are many expressions of belonging narratives and practices at the Institute, and by organizations and activists beyond the Institute, even if they do not use the same word. We believe it is useful to continue to be more explicit about belonging as we challenge othering. We have begun to surface what true belonging looks and feels like, at many levels, interpersonal, social, political, and structural levels as well as how we practice culture and employ narratives, both consciously and unconsciously. We better understand that interventions of belonging are more than equity interventions—they have an affective component that changes how the target group feels or responds about the institution or intervention. Belonging is not about joining an exclusive club, or even being made to feel that you belong, but about co-creating that to which we all must belong, which requires engagement with power. As frames, both “inclusion” and “equity” fall short of fully capturing these co-creative components.

It is important to understand the issues and problems we are dealing with. But this is not enough. We must also have some way of operationalizing this understanding. Two of the ways we help to operationalize belonging is through “Targeted Universalism” and “Bridging.”

Our long-in-development primer on Targeted Universalism will be launched around the same time as this edition of our news magazine. For more than a few years, the Institute has been working on a comprehensive primer that explains and illustrates the promise and process for applying a Targeted Universalism framework to our most challenging societal issues. We will be pleased to release the primer and to learn from its application and contributions. Targeted Universalism, which is thought of as “Equity 2.0,” is practiced by groups and institutions all over the country and world. It is one of the ways to operationalize belonging. The primer, entitled “Targeted Universalism: Policy and Practice,” illuminates how a Targeted Universalism policy framework opens up new avenues for transformative change, by rejecting a one-size-fits-all solution to policy problems or social ills. Instead, what is needed are a range of strategies capable of advancing all groups to the universal goal, which is defined, in part, by our collective aspirations. Through Targeted Universalism, we reject the false dichotomy of “targeted” v. “universal” policy prescriptions. Such debates were prominent in the midst of the 2015 proposal by President Barack Obama to expand pre-K, and will no doubt become even more prominent during the 2020 presidential primary season as universal health care becomes one of the nation’s foremost policy questions. Our report offers a valuable and timely contribution to these ongoing conversations.

When it comes to “Bridging,” it helps to understand it by considering its opposite, which is breaking. Breaking is the process of defining some groups as other and a threat. A number of policies naturally follow from breaking. The opposite of breaking is bridging. It requires a commitment to listening to others, to narrative, and to the imagination of larger “we’s” without saming our differences.

But bridging is not just interpersonal. It impacts not only how we think of policies and practices, but also how we talk about and implement them. In the US there has been a foundational question of who can really belong. The right-wing answer has been to narrow the “we.” Our work in the US and beyond calls for a new story where we all belong. Through projects like Civic Engagement Narrative Change, the Institute works across sectors to integrate analysis, rigorous empirical research, strategic alignment, narrative development, communications, cultural strategy, and organizing—nor just for not just narrow winning coalitions, but for new ways of being and making change together.

This is not short-term work. Making a new “we” does not happen in the final months or years when the election cycle heats up. It doesn’t happen on two-year timelines or four-year timelines. That’s why the civic organizations with which we partner are those rooted and led by local communities, are invested in building real capacity and power, and work year-round to increase all manner of democratic participation. You can read more about some of their work on page 21.

We look forward to continuing this journey of deepening our understanding of these turns in today’s world in order to continuing co-creating a world built on belonging.