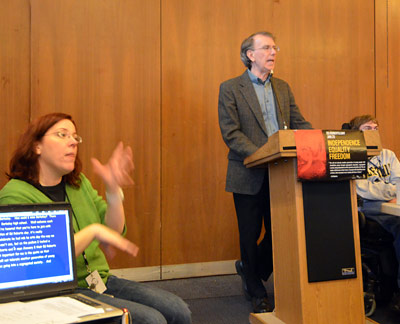 Twenty-five years after the passage of the Americans with Disabilities Act, Paul Hippolitus, Director of the Disabled Students Program at UC Berkeley, talks about his work in the disability field for the past 44 years. Prior to coming to Berkeley, Hippolitus worked in Washington, DC, where he played a key role in efforts to pass and implement the ADA. In this Q&A, he discusses his background in disability justice as well as the social and economic impact of living with disabilities.

How did you contribute to the passage of the Americans with Disabilities Act?

While I was program director of the President’s Committee on the Employment of People with Disabilities, I worked for Justin Dart, Jr., who is understood to be one of the fathers of the ADA and a central figure in terms of personifying the movement. He lobbied the disability community around this mandate to be passed, and collected information about discrimination, so Congress would have data and real life examples and be further compelled to pass it. From 1986 to 1990, I worked with him on a task force he organized where disability rights leaders would come together and discuss what their position would be on the various points of the law. And that became a unified voice.

He or others like him would carry it to Congress and say, for example, “The disability community supports the idea of including people with HIV/AIDS in the definition of disability.” That was a very controversial call, because it was 1988, and people were frightened of it, because they didn’t know anything about it. There was a lot of morality around it. So the disability community had to struggle with the idea of “Do we embrace that constituency? Or do we push away from it for fear that if we embrace it, the law might not pass?” But they stood on principle rather than practice, and they embraced it. Those were the kinds of debates and discussions that I was a part of. When the law was passed in 1990, I was at the signing ceremony at the White House.

How do you think the US has changed since the passing of the ADA? What are the current challenges of living with a disability?

One of the things that’s missing is that we haven’t energized, we haven’t educated our young people with disabilities around their employment potential. Think about it. If you have a disability, it’s a label. It’s a dominant label. Nothing about that label is positive. And it’s not because they’re not talented—they are talented—it’s because of the negativity, the stereotyping, the labels. All of that adds up to a drag on your taking this great education and going out and using it in a way that will do good for society, a corporation, your own self.

Some of our students think that their future is going home after graduation, watching television, and being on Social Security disability benefits the rest of their lives. How tragic. First of all, the most money they can get each month is $850 for the rest of their lives. Living on $850 a month is not a bright future, and it’s a waste of talent to boot. It’s poverty.

Another challenge our students with visible disabilities have is the lack of socialization. It’s a big part of college life with events and activities, but I noticed when I got here that a lot of our students came in to talk to me for their socialization.

I asked a group of students about this and one young man said, “I’m embarrassed to say this, and I don’t know how anyone else feels, but I’ll see somebody with a disability, and because we’re in a very politically correct atmosphere and environment, I’m afraid I’ll say the wrong thing, so I don’t say anything.”

I think that maybe on a campus like UC Berkeley that’s so keen on political correctness or equal opportunity or equity and inclusion, when it comes to visible disabilities, those ideals sort of melt away because you’re afraid you’re going to say the wrong thing.

The isolation can be pretty intense. Students have left Cal because of that isolation, not because of grades. They’re lonely.

Another side of the coin is that people who acquire disabilities [as opposed to being born with them] have a precipitous drop in that pit of disability, where all the negativity becomes even more intense because they don’t have perspective on disability, they think it’s worse than it actually is. A lot of people who acquire disabilities never work or never go back to work; they just assume that their lives are over. Nobody has an owner’s manual that talks about disability and says, “that’s not true. Here are the resources, here are the strategies, here are the examples of people just like you doing great and beautiful things.”

We have these laws, we have this sense of public policy around non-discrimination, but we don’t have a sense or a sensibility around empowerment to take advantage of all that, and that’s the missing piece.

Some people with disabilities have to get up at 4:00 am for a class that begins at 8:00 am. That’s the regimen they have to go through to get to the class. So, you could say that one way to look at that is that by having to do that, it implies discipline around your scheduling. They’ve got to be really thoughtful about all their movements. Calculate. It’s a time management strategy. They’ve got to be careful. So, disability is an asset.

If you could change the ADA or perhaps create a solution to the problems you’ve talked about, especially about employment issues, what would you do?

What I would do is more education for parents, for students around the positive aspects and the true potential and the meaningful self-confidence that is the majority part of their being. We really don’t know what the human potential is around disability until we let people experiment and try and the only way they’ll do that is if they feel some room to do that, even encouragement to do it.

Tell us about the Disabled Students Program at Berkeley—its purpose and its significance, both at UC Berkeley, and on a national level.

Our office is the part of the division at the university that seeks to ensure that the legal requirements of the ADA are observed. We invite any student who believes they have a disability to meet us and present information about that disability so that we can come to understand it and understand the functional limitations of that disability in terms of learning. We help the university not to discriminate against students with disabilities in the educational experience.

What would you say its significance is on a national level? I’ve read a lot about how the DSP at Berkeley has had a lot of impact nationally in higher education.

We were one of the first programs of our kind in the nation. It started in the early ’60s before the laws were passed. It started with the power of one student whose name was Ed Roberts. He challenged the university and helped the university accommodate him. As that began to unfold, he invited other students with disabilities to come challenge with him, and that challenged the university further to the point where a critical mass of a constituency arrived here at Cal. They taught the university how to respond to people with disabilities. Then, when the laws were passed, this office was set up to formalize the response and give it legitimacy, budget, and structure.

What’s next for disability justice?

When the original ADA law passed, my boss, Justin Dart Jr., said, “This is but a first step.”  Some people thought we had crossed the finish line, but we haven’t. We’ve really just started.

Read more about the twenty-fifth year anniversary of the passage of the Americans with Disabilities Act.