A granite figure representing a slave on display at the UN headquarters in New York evokes sadness, but invites visitors to heal.

It’s been 400 Years since the first African people were forcibly brought as slaves to the English colonies in North America. Throughout those four centuries the story of African Americans has been one of constant struggle for freedom and justice. At the Haas Institute and UC Berkeley, we are marking this anniversary with a year-long program that shines a light on those historical struggles, draws their connections to our current moment, and shows how contemporary scholars and activists are confronting old problems with new approaches.

On permanent display at the United Nations headquarters in New York is a full-scale granite figure representing a slave kidnapped from Africa who is being transported across the Atlantic in a lower deck of a ship. But at this slavery memorial, known as the Ark of Return, the figure is not shown naked, shackled, or otherwise humiliated in other depictions of the slave trade.

Rather, the androgynous figure is fully draped in a white cloth, the head slightly elevated, and arm extended outwards with an open palm as if reaching towards the memorial’s visitors in a gesture that evokes empathy and sorrow, but also invites reconciliation and healing.

“There’s a dignity there, but there’s also an incredible sadness,” Denise Herd, the Haas Institute’s Associate Director, explained as she recounted a visit over the summer to the Ark of Return. Herd made the remarks at a symposium marking the launch of a year-long initiative at UC Berkeley marking four centuries since a slave ship first docked in the English colonies.

The symbolism in this figure partly captures the complex and multi-layered mission of what the initiative at UC Berkeley, which Herd has been instrumental in leading, is trying to achieve. On one level, it’s about a recognition of the horrors of slavery and its impacts on society today. But at a deeper level it’s about imagining a future in which the country can heal from its wounds and forge a new path, one in which everyone has a stake and no one is left out.

The obstacles standing in the way of creating a common path are many. But at the heart of racial inequality and violence are the many forms of white supremacy, from the explicit hate crimes that have spiked in recent years, to the implicit forms which are embedded in this country’s laws and institutions manifested in voter suppression, residential segregation, the carceral state, and their many consequences.

By connecting the dots between slavery and the many contemporary forms of oppression and injustice that are its legacy, and by highlighting the enormous achievements of Black people in their struggles for justice, their contributions to culture, and their visions of liberation, initiatives like these can help produce an imagination for a future based on new modes of thinking that humanize people, that lead to constructive actions, and that develop a new language to get us there.

Examples of these new modes of thinking are already being demonstrated across the country. For instance, when Desmond Meade, the brilliant organizer who led an effort to re-enfranchise 1.4 million Floridians last year, talks about why his campaign adopted the term “returning citizens” to refer to people with felony convictions, he explained that “if you call somebody an ex-felon, convict, offender, you increase the likelihood of them recidivating.”

“We wanted people to speak of themselves in a positive way, and not what someone else had defined, but how we define ourselves,” Meade said in an interview with the Haas Institute earlier this year. Language was a critical part of the strategy in the imagination for a new, shared future but it wasn’t the only strategy. The campaign effort to reach out to white conservatives and break down boundaries was underpinned by a key tenet of the work, a commitment to the shared humanity of all returning citizens no matter race or ideological persuasion. And with that imagination and organizing brilliance, the campaign achieved what many thought impossible: The repeal, supported by an overwhelming majority of Florida voters, of a Jim Crow-era law established 150 years ago that had been designed to prevent newly-freed slaves from voting.

Approaches that emphasizes our shared interests and values are pressing. By 2043, the Census Bureau says people of color will make up more than half the country’s population. Changing demograpics has induced a level of deep anxiety in white people who view these changes as a loss. This fear of “displacement” is exacerbated by a deeply-rooted, although often unacknowledged, white supramecist idea that other groups are inferior, poorer, less educated, and more violent. The idea of “displacement” and its more exaggerated position, “replacement”,  suggests a competition between an “us” and a “them” that neglects our mutuality and interconnection. Such notions, stereotypes, and misconceptions drive dominant narratives, one which initiatives like these at Berkeley are challenging.

One of the ways the initiative is challenging this narrative is by uplifting the voices and shining the light on work by contemporary Black scholars and activists who, as Meade noted, speak for themselves, and not let their work be limited by the confines of language and space that have been constructed by predominantly white scholars. 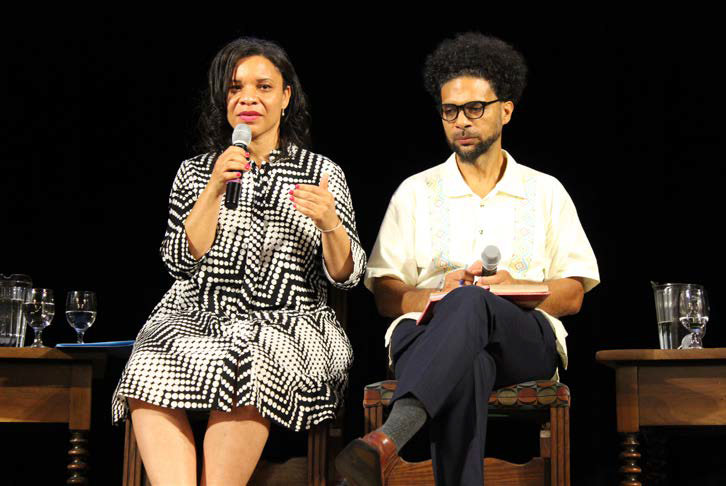 Talitha LeFlouria, Associate Professor in African and African-American Studies at the University of Virginia, and Dennis Childs, Associate Professor of African American Literature at UC San Diego, share the stage at the 400 Years of Resistance to Slavery and Injustice Symposium.

The presenters taking part in the Berkeley 400 years initiative demonstrate a keen awareness of the role of framing in achieving justice. At the kickoff symposium, York University scholar Christina Sharpe was asked by an audience member why she chose not to show images of victims of lynchings—the topic of her presentation. Her answer was simple: Those kinds of images do not produce empathy. What can be inferred from her response is that those types of images, far from offering a sense of empowerment, instead reinforce the idea that slaves were less than human.

Angela Davis, the famed scholar, activist, and a leading advocate for international solidarity movements, has talked about the need for “richer and more critical vocabularies with which to express our insights about racism.” In a 2015 speech in St. Louis marking the one-year anniversary of Michael Brown’s murder by police in Ferguson, Davis told local activists that the current vocabulary about anti-Black violence in this country has resulted in a situation where “generations of Black people … have not learned how to imagine the future.” “The development of new ways of thinking about racism requires us not only to understand economic, social, and ideological structures, but also collective psychic structures,” she explained.

So the deliberate choices of how to talk about certain groups or what images to show or exclude is not merely a question of sensibilities. There is push to understand the logic behind aspirational definitions of groups of people that can lead to positive outcomes for them, while also reducing the country’s general sense of social anxiety. Trabian Shorters, a strategist and head of the organization BMe Community which works to uplift Black youths, explains this logic as one based in neuroscience.In his public talks he demonstrates how the subconscious mind has already drawn conclusions about certain groups of people, even before the conscious mind has time to think. These conclusions are formed based on dominant narratives about those groups. When we shift that narrative to something positive, we also shift the thinking of the subconscious mind so it’s not primed to trigger racialized stereotypes when certain words are invoked.

By repeating statistics about the racial equity gaps in education, or poverty, or the overrepresentation of Black people in prisons, what we’re essentially doing is hardening these associations in our subconscious minds, even if our conscious minds understand the structures that create and reinforce inequality, and that’s counterproductive for a society trying to overcome racial divisions and pursue a path towards healing. By defining people by their contributions to society and their aspirations, rather than only the obstacles they face, we begin to redevelop our modes of thinking, reshape dominant narratives, and reimagine the potential for a pluralistic society in which everyone benefits. As the younger, more diverse generations replace the Baby Boomers, so too will they change the narratives and norms established by white society. “The question is, how are they going to change [the narrative],” Shorters asked in a 2017 talk. “Are they going to change it in a way that recognizes and dignifies people, or are they going to change it in a way that continues to denigrate and separate?”

This doesn’t mean ignoring the past. Nor does it mean downplaying the magnitude of the problems society faces. Like the artist who conceptualized the UN’s slavery memorial in New York, the work  is to show how the past has brought us to where we are today, present it in a way that speaks to the realities of historical and contemporary forms of violence and injustice, and does it in a way that humanizes people, reveals the common interests in overcoming white supremacy, and invites new kinds of conversations about our individual and collective aspirations.

“We have to build on the past so we can actually move to a future,” john a. powell said at the closing of the Berkeley 400 years symposium. As he acknowledged that this future must include truthful stories about the past, we must also “develop a story to create a future that belongs to all of us.”

Learn more about the 400 Years of Resistance initiative at UC Berkeley by visiting 400years.berkeley.edu.