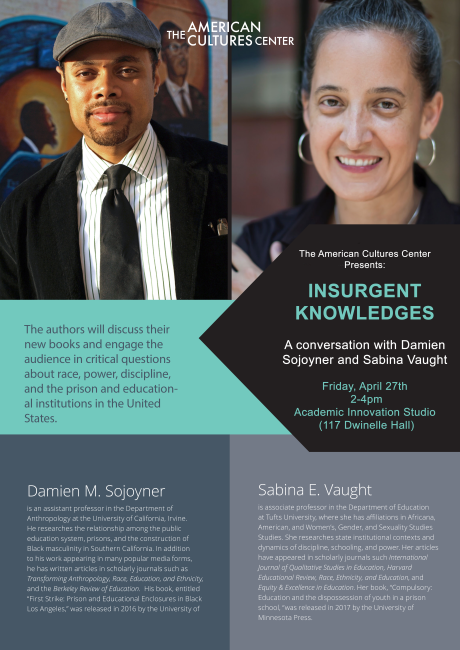 Damien M. Sojoyner is an assistant professor in the Department of Anthropology at the University of California, Irvine. He researches the relationship among the public education system, prisons, and the construction of Black masculinity in Southern California. In addition to his work appearing in many popular media forms, he has written articles in scholarly journals such as Transforming Anthropology, Race, Education, and Ethnicity, and the Berkeley Review of Education. His book, entitled "First Strike: Prison and Educational Enclosures in Black Los Angeles," was released in 2016 by the University of Minnesota Press.

Sabina E. Vaught is an associate professor in the Department of Education at Tufts University, where she has affiliations in Africana American, and Women's, Gender, and Sexuality Studies. She researches state institutional contexts and dynamics of discipline, schooling, and power. Her articles have appeared in scholarly journals such as International Journal of Qualitative Studies in Education, Harvard Educational Review, Race, Ethnicity, and Education, and Equity, & Excellence in Education. Her. book "Compulsory Education and the dispossession of youth in a prison school, " was released in 2017 by the University of Minnesota Press.