THE RESEARCH DEVELOPED to prepare this report includes a United States of Islamophobia database and examines federal measures that aim to further exclude Muslims in the US. The purpose of the database is to uncover the impacts and content of anti-Sharia legislation and the movement. The state and federal measures described in the next two sections are summaries of extensive research that further unmasks the genealogy of the contemporary Islamophobia movement in the United States.

Collectively these resources provide the tools required to challenge and repeal anti-Muslim state legislation. Content and data within this report were incorporated from a variety of sources, most notably from expert interviews, law journals, academic books, research reports, research institutes, academic articles, news articles, databases, state legislature websites, legislative services, legislative search and tracking engines, as well as the Haas Institute’s United States of Islamophobia database. ii This section provides an overview of the methodology used to develop the database, as well as our approach to the analysis of the data that informed our identification of key themes and effects relating to anti-Sharia legislation in the US.

An essential component of our research sought to contextualize the political landscape in which the contemporary Islamophobia movement emerged. Major events, activities, and movements created the climate to launch the contemporary Islamophobia movement, ultimately paving the way for the introduction of anti-Sharia legislation. This trajectory illustrates a process of an intensified othering of Muslims in our society today.

The findings of this report are based upon a review of an online search that identified all anti-Sharia and anti-foreign law bills introduced in the 50 US state legislatures, and at the US Congress and Federal Government level as well. This enabled a robust analysis of the anti-Sharia bills that included the extraction of patterns, trends, and the measurement of these bills’ impact. This search was accompanied by earlier reports, policy papers, and research produced by the Institute for Social Policy and Understanding (ISPU), the Pew Research Center, and the Council on American-Islamic Relations (CAIR)—invaluable resources that provided data and information on anti-Sharia and anti-foreign law legislation. However, these previous reports and databases remain outdated, and require the documentation of new bills introduced since their publication. To ensure the extensive accountability of all bills we conducted an independent, exhaustive search to identify the anti-Sharia and anti-foreign law bills, populating vital information related to the bills in a comprehensive database for further analysis and documentation.

Our online search for the bills covered the years 2000 to 2016, encompassing the period leading up to and following the national tragedy of 9/11, as well as the duration of both the Bush and Obama administrations.19 To locate and identify all anti-Sharia bills we conducted a keyword search for the terms “Sharia,” “foreign laws,” “Islam,” and “American Laws for American Courts” on the state legislature or general assembly websites for each of the 50 states. If the bill contained language from the American Laws for American Courts (ALAC) model act or similar language banning the application of foreign or Sharia law, the bill was included in this study as an anti-Sharia bill. To verify the bills that were identified in our research, as well as to confirm new findings or new bills, we compared our search results with research and databases produced by ISPU, CAIR, the Pew Research Center, Open States, as well as online media sources. 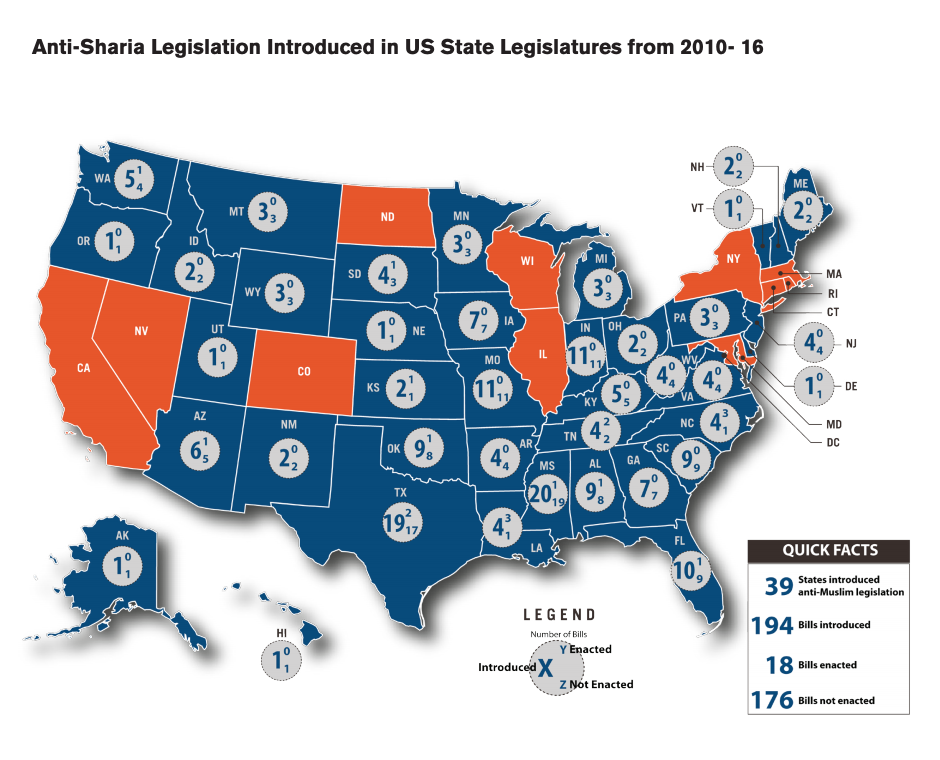 Interview excerpts are provided throughout the report offering both expert and personal insights on the anti-Sharia bills, on the impact of such legislation, and the reverberations of Islamophobia and xenophobia in the United States from a legal, historical, political, social, and intersectional perspective. To view the full version of the cited, and additional interviews, visit haasinstitute.berkeley. edu/islamophobia.

The main challenges of identifying, gathering, and organizing information on the anti-Sharia bills included navigating the state legislature or assembly websites, as well as developing a uniform method to accurately display information and data pertaining to the anti-Sharia bills in the database. In some cases, the state legislature or assembly website failed to provide online access to bills introduced in legislative sessions prior to 2010, or the website itself lacked a user-friendly search system that limited the ability to identify the bills. We ascertained additional information and data for these particular states by utilizing ISPU’s Islamophobia 2015: Restrictive Measures Map, the Pew Research Center’s publication on State Legislation Restricting Judicial Consideration of Foreign or Religious Law, 2010 – 2012, as well as Open States, an online search engine for state legislation. In order to create cohesive categories for the data and the information in the database, we established standard terminology to describe the final status of the bills. The terminology used for the status of the bills varied by state legislature, listing the bill’s status as “Died in Senate,” “Referred to a Committee,” etc. For purposes of analysis and organization we categorized the bills in the database as “Enacted” or “Not Enacted” to indicate whether or not the bill was enacted into law.

The United States of Islamophobia Database

The United States of Islamophobia database is a comprehensive research tool that identifies and provides detailed information on all anti-Sharia bills introduced in the 50 US state legislatures between 2000 and 2016. This interactive database will be updated annually and will serve as the most comprehensive and up-to-date database to monitor anti-Muslim legislation in the US. It is an invaluable resource for policymakers, advocacy groups, researchers, academics, and the public at large to obtain detailed information about the bills introduced in their state, as well as the legislators who are advocating for these bills that aim to single out Muslims. By providing a mechanism to demand accountability from our elected officials, it ensures that our representatives are endeavoring to better the nation by fostering inclusivity within American society, not sowing discriminatory policies and subverting a people’s rights for political gain. Furthermore, the information and data identified in the database can be utilized to: prevent future bills or laws from being introduced in state legislatures; educate and expose the unfounded fear of Sharia and the unconstitutionality of the anti-Sharia, or ALAC bills; engage the media to address laws or bills that have been introduced or enacted in their state to draw attention to anti-Muslim efforts within their state; mobilize groups, individuals, and communities to challenge anti-Muslim efforts in their state; and safeguard all Americans’ rights and protections as afforded by the Constitution.

The database was developed specifically for this research project, functioning as a tool to analyze the extensive information on each anti-Sharia bill. The database aided in the extraction of complex patterns and trends related to the bills and enabled us to produce new data, track the status of bills, as well as assess and contextualize the drivers of the discriminatory anti-Muslim legislation within the larger context of US politics and the expanding contemporary Islamophobia movement in the United States. Following an exhaustive search, relevant data and information extracted from the bills’ text and state legislature websites were organized in the database, indicating general information relating to the bills, bill themes, and discriminatory effects of the bills. The filters were carefully selected to assist in the organization, synthesis, and analysis of the information associated with the bills, and to inform the writing and data analysis contained in this report. The database includes the following sections: