THE CURRENT POLITICAL CLIMATE in the United States reflects a new reality influenced by a populist leadership that occupies the highest office in the land,1 colluding with a reemergence of white supremacy, that is being (re)used as a tool to drive a wedge between poor white people and people of color on the one hand, and to increase fearmongering and anti-Muslim sentiment in American society on the other hand.2 Together, this has given rise to anti-black, Islamophobic, anti-immigrant, and anti-refugee grassroots movements,3 increasing racial prejudice and racial animosity to an unprecedented level.

This report acknowledges that Islamophobia in the US is not new;4 however, over the past 16 years, the rapid development and convergence of contemporary Islamophobia movements have brought forth federal measures and state legislation that frame Muslims as untrustworthy and incompatible with American values, further subjecting Muslims to surveillance, profiling, and exclusion along the lines of racial and ethnic discrimination, as determined by their national origin and religion. Additionally, contemporary Islamophobia movements— operating with the shared ambition to scrutinize and dehumanize Muslims—aim to other and undermine Muslim Americans’ citizenry and agency.

Islamophobia is a form of xenophobia and discrimination based on religious and national origin that aims to single out and exploit Muslims as political scapegoats for failed economic and political projects, and functions as a proxy for racial anxiety within the US.5 Between 2010 and 2016, 194 anti-Muslim bills were introduced in 39 states, with a total of 18 anti-Muslim bills enacted into law.6

Islamophobia is contingent upon the construction of a homogenized Muslim “other” who should be viewed suspiciously, scrutinized, dehumanized, and excluded from “Western” or “Judeo-Christian” societies.

The othering process is not simply an abstract concern—it has profound effects on the lives of millions of Americans.7 Othering of Muslims or those perceived to be Muslim has been expressed in acts of violence, prejudicial views, and discriminatory language. In addition, Islamophobic sentiment has led to the exacerbated militarization of foreign policy and an unprecedented expansion of security apparatuses that impact all Americans.8 Islamophobia forms the basis of an ideology that views Muslims as a threat to “Western” civilization and justifies their subordination and exclusion.

By 2010, Islamophobia in the US had evolved from compartmentalized, racist, anti-Muslim sentiments and efforts as experienced by individuals into a well-financed, organized, and strategic national movement with a grassroots and legislative agenda. This major shift is largely attributed to the national campaign in 2010 around Park51, the interfaith community spiritual center that was under development in New York City. Pamela Geller and Robert Spencer made national headlines leading an alarmist campaign against Park51, striking up controversy over what they dubbed the “Ground Zero Mosque,” laying the foundations for more well-organized Islamophobic efforts to thrive.9 While the movement was advancing its fearmongering agenda among the public on a national scale, the political elite, both Democratic and Republican, and the mainstream media stood on the sidelines without responding or fact-checking the movement’s claims,i and by 2010, the anti-Sharia movement was making its way across the nation.

David Yerushalmi, an anti-Muslim lawyer with a history in the right-wing Israeli settlers’ movement10 crafted an anti-Sharia model act known as American Laws for American Courts. This model legislation was the spark that ignited a wave of anti-Muslim laws and proposed legislation that has given rise to the anti-Sharia movement, and the enactment of 18 anti-Muslim laws in 12 states in the US between 2010 and 2016.11 The anti-Sharia movement was established, and continues to thrive, by an unfounded fear of “creeping Sharia,” proliferated by fabrications and lies, and intentionally misconstrued information surrounding Muslims and Islam in the US.12 Such fear is what propels the anti-Sharia movement, and such beliefs are not the byproducts of innocent, misguided illusions of Muslims and their faith, but rather operate as the scaffolding in a grand strategy designed by the architects of ALAC and the anti-Sharia movement to exploit the American public’s limited knowledge of Muslims, Islam, and Sharia with the purpose to utilize Muslims as scapegoats for political, economic, and social challenges facing the country.13 Most importantly, this was carried out vis- à-vis the convergence of Islamophobia and the birther movement to distract the public, and to attack President Obama’s agenda.14 The outcome produced a deep disenfranchisement and undermining of Muslim Americans’ agency and citizenship.15 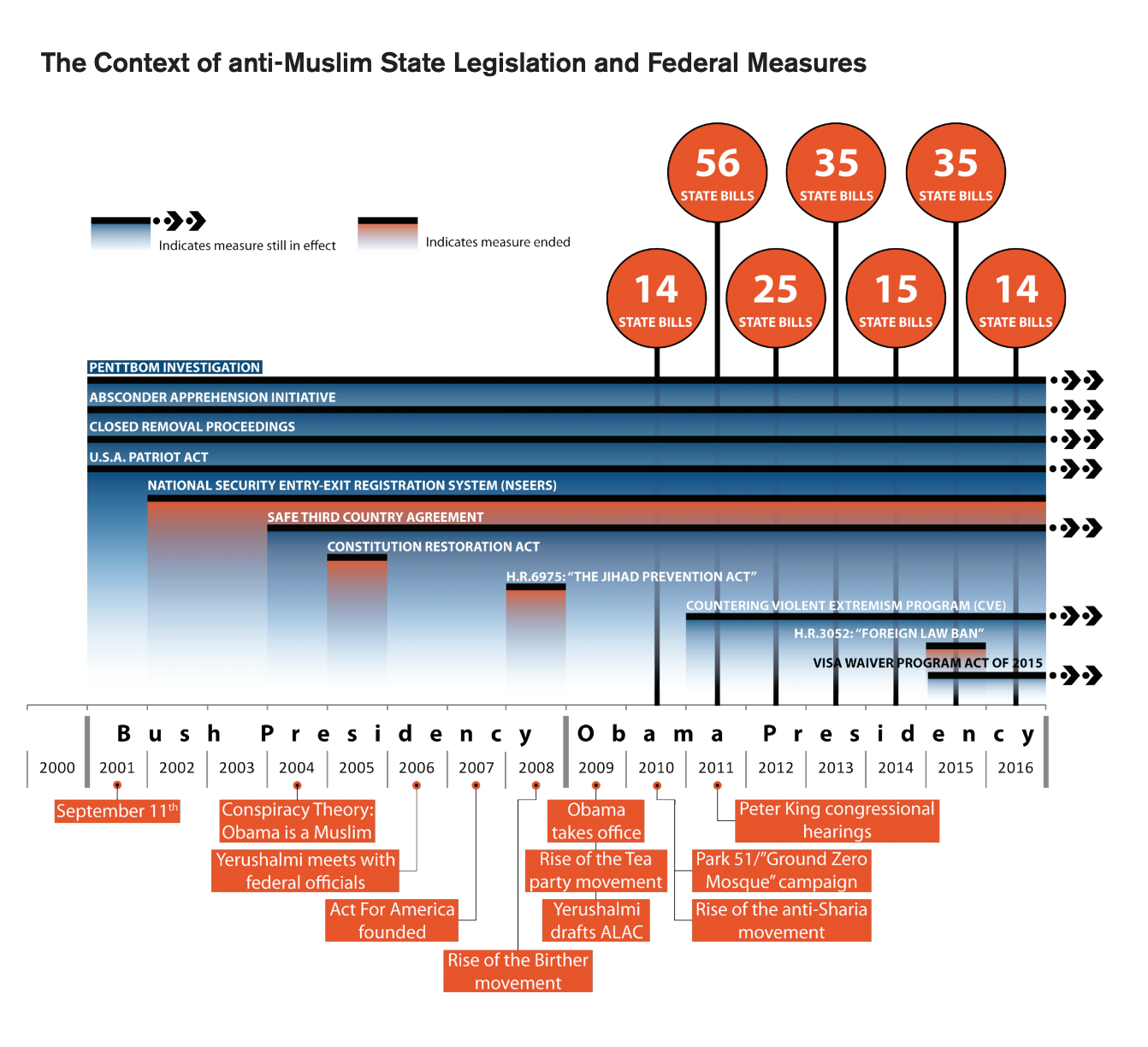 The anti-Muslim legislation and bills are sweeping, and have the potential to impact the lives of not only Muslims, but all Americans, as such laws undermine the Constitution and sabotage judges’ ability to fairly consider foreign law to understand cases before their courts.16 The far-reaching impact of these anti-Muslim bills and the degree to which, if enacted, they will affect many Americans, is yet to be fully understood and documented, but the underlying reality is that anti-Muslim legislation threatens the civil and constitutional rights of all Americans.17

Our report and online database (see haasinstitute. berkeley.edu/islamophobia) aim to unmask the multiplicities of anti-Muslim and anti-Islam movements that have propelled the adoption of federal measures (2002-present) and capitalized on electoral politics and state legislatures (2010-2016) to disproportionately legalize the othering of Muslims across the United States. This report is also imperative for understanding the impacts of anti-Sharia legislation, and imagining cross-sectoral and coalition-building efforts, as well as to aid the growth of effective, inclusive movements that bridge across racial/ethnic and religious lines to stand against othering. This report therefore is organized in the following way: