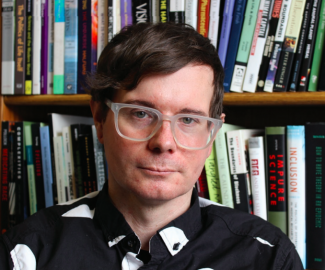 We know that trans/queer people, particularly those of color and/or low income, are hyper-policed and imprisoned. Like myself, many of us are kicked out of school at a young age, end up homeless and working in the informal economy which push us against the police on a daily basis. Yet, it is not only that trans/queer people are so directly impacted by the Prison Industrial Complex, it is also that these institutions are central in the production and reproduction of the gender binary. This is to say that part of their violence is in how they generalize the fantasy of only two, knowable genders.

More recently, you edited Trapdoor, which examines the ways that “trans people are frequently offered “doors”—entrances to visibility and recognition—that are actually ‘traps,’” accommodating trans bodies and communities only if they adhere to dominant norms. Can you give some examples of such traps?

I think one way of monitoring normative power is by paying attention to what concessions it is most willing to make. In the case of trans politics, many of us are demanding the fundamental remaking of the world, which includes abolishing the prison industrial complex, support of native sovereignty, an end to the structured abandonment of homelessness, indeed, an end to racial capitalism, and yet what we are “given” is a trans person on TV. While we know that representation is powerful in that it constructs and does not simply “represent” the world, we also know that we have to hold on to redistribution and an end to the systems of exploitation that build wealth for so few and build death for so many, along with our demands around representation.

You have critiqued the mainstream LGBTQ movement, particularly for its limited focus on so-called “equality” and marriage. Where has that been problematic and what discussions around LGBTQ rights would you center?

The critique of the institution of marriage is actually really old, and was once fairly central to feminist organizing. We know that marriage is fundamentally a system of capitalist transfer that works by way of exclusion. For example, before the most recent “fight for gay marriage” the demand for “health care for all” was fairly common in LGBT organizing, but then this structural demand was funneled into a narrow demand of partner-based insurance coverage. We can also look at how Gavin Newsom instrumentalized “gay marriage” at the same time pushing conservative anti-poor people policies, like Prop N “Care Not Cash.” He gets understood as “champion of the gay community” while trans/queer youth die on the streets of San Francisco. I believe we must build toward the impossible, or we have already lost.

You’ve also used filmmaking as a form of queer activism, particularly with your most recent film, Criminal Queers, which relies on camp aesthetics and satire to critique the prison industrial complex. Why did you decide to use those aesthetics?

Chris Vargas and I decided to make Criminal Queers as a narrative film because while there are many great documentaries that help us understand the violence of policing, we also wanted to remember that pleasure, as in the pleasure of collectively organizing to abolish prisons, must be part of our radical practice. We, trans/queer people, have always used camp and humor as a survival strategy in a hostile world, so instead of devaluing humor, we should use it.

Tell us about your current projects on trans resistance.

I’m working on two new projects, one on trans/queer people in armed underground left movements in the US, like the George Jackson Brigade and the Black Liberation Army. The second project is, at least now, trying to think about housing and homelessness in relationship to trans spaces in the Bay. Particularly I’m interested in how the war on public spaces, like the streets of the Tenderloin in San Francisco, are also racialized attacks on trans spaces. For this project I have a lot of questions I’m still working through, like the relationships between “defensive architecture” and coercive gendering.

How do you intend to work to move your scholarship from “research to impact,” as is one of the key goals of the Haas Institute?

All kinds of research is hopefully impactful. My more “theoretical” work, if I’m lucky, helps to offer us new grammars for understanding the world we inhabit. The interesting thing about the Haas Institute is that it helps to bring humanities-based people, like myself, into conversations with more policy-minded people.