The Future of SNAP? Improving Nutrition Policy to Ensure Health and Food Equity

This brief summarizes key points and critical questions about the “Future of SNAP,” highlighting approaches to improve nutrition policy to ensure health and food equity nationwide. This summary emerged from a workshop held in May 2015 at the University of California, Berkeley (UCB), which brought together leading researchers from UCB and other universities as well as representatives from respected non-profit organizations and government agencies. The following is intended to serve as a launching point for ideas moving forward and future research in creating a more equitable food system.*

SNAP (the Supplemental Nutrition Assistance Program, formerly known as food stamps) is the fundamental safety net program in the United States, providing critical assistance to over 46 million people living in 23 million households. The majority of SNAP households include a child, an elderly individual, or someone who is disabled.1

One of the original purposes of the program was “to provide for improved levels of nutrition among lowincome households” and “to safeguard the health and well-being of the nation’s population.”2 Despite recent federal cuts to the program, SNAP participation rates are at an all time high, while error rates are at an all time low, without any significant increase in administrative costs.3

SNAP is critical to reducing poverty. SNAP benefits provide modest income support, averaging about four dollars per person per day. As a result, most households combine cash and SNAP to buy food. However, even in small amounts, SNAP expands users’ budgets overall, so that they are better able to cover basic needs. With the exception of the Earned Income Tax Credit (EITC), SNAP is the largest antipoverty program for families with children in the United States. As shown in the figure above, SNAP lifted 10.3 million people, including 4.9 million children, out of poverty in 2012, significantly more than other federal assistance programs.4 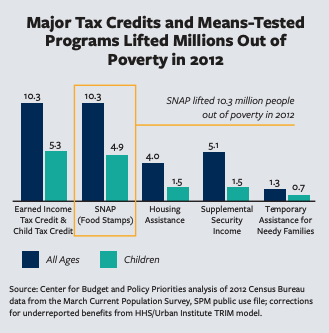 SNAP is the closest thing the United States has to a “universal safety net.” While some restrictions exist for able-bodied adults and immigrants, eligibility is need-dependent.5 As an entitlement, anyone who is eligible can receive benefits, allowing the program to respond to recessions and other changes in need. This was never more important than during the 2008 Great Recession; as the unemployment rate grew to almost 10 percent in 2010, SNAP expenditures per capita expanded to meet the need (see figure above). 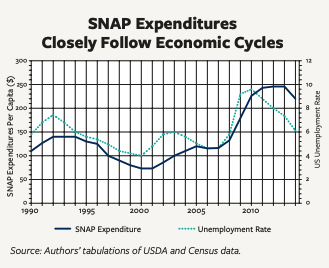 SNAP is one of the few programs that supplements low-income families throughout the year. Contrary to popular belief that SNAP recipients are largely unemployed, most adult able-bodied recipients use SNAP to supplement wage earnings.6 However, earnings for low and moderately skilled workers over the past five decades have remained relatively stagnant or declined, and the rates of inequality in the US have reached levels not seen since before the Great Depression.7 Furthermore, the extension of benefits from the Great Recession, such as unemployment insurance, has expired and TANF assistance has greatly declined since welfare reform (the Personal Responsibility and Work Opportunity Reconciliation Act of 1996). With lower wages, higher inequality, and few other safety net programs, SNAP is vital to making up for falls in family income.

SNAP is an important tool in combatting hunger and improving health. Several studies have shown that participation in SNAP reduces food insecurity.8 Additionally, a recent study found that access to SNAP during pregnancy led to improved health outcomes, including increased birth weight.9 These effects also had a long-term impact; childhood exposure to food stamps in early life was found to lower the incidence of metabolic syndrome in adulthood (obesity, high blood pressure, and diabetes).10