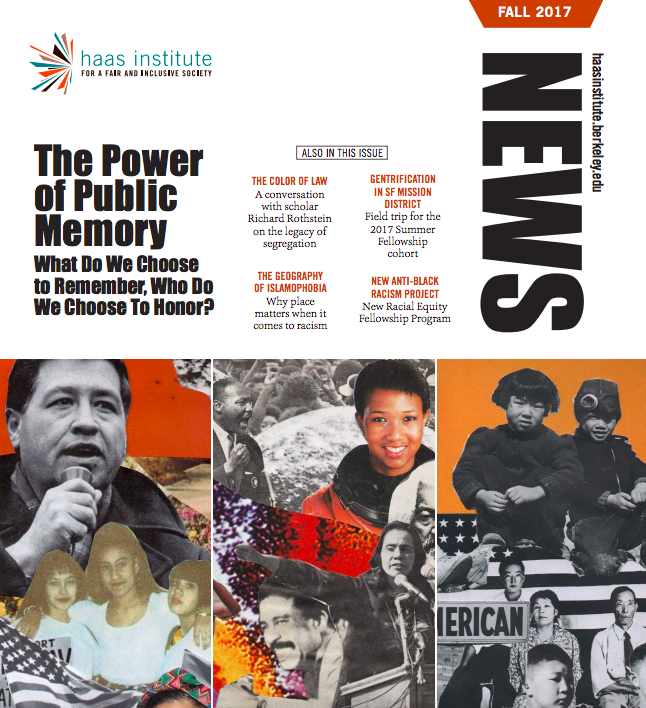 The 2017 Haas Institute news magazine is a 44-page publication available online or in print form, that offers updates on our work, original feature stories, analyses, interviews, profiles, and more. This issue covers the period ranging from September 2016 to August 2017, and includes a wrap-up on our second Othering & Belonging conference, summaries of our recent reports on migration, refugees, housing, and the second issue of our Othering & Belonging Journal.

DIRECTORS' NOTES
From john a. powell
From Stephen Menendian

FEATURES
The Power and the Promise of Public Memory 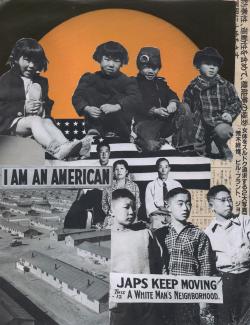 Author Sara Grossman contrasts the differing approaches of the US and Germany in dealing with their disturbing pasts, particularly slavery and Nazism. Whereas US cities continue to maintain monuments that honor Confederate figures, who represented the ugliest values and darkest episodes of the country's history, Germany has erected structures in the heart of its capital that memorialize the victims of their own crimes against humanity. The article, full of interviews with experts on historical narratives, highlights the reality that until there's a shift in the US public memory that owns up it past horrors, effective dialogue, healing, and real justice will have no space to incubate.

Segregation Was No Accident: Interview with Richard Rothstein 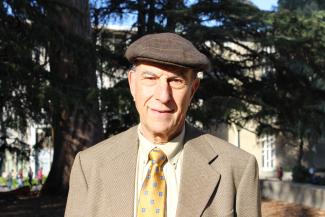 Writer Marc Abizeid sat down with Haas Institute Senior Fellow Richard Rothstein to discuss his new book, The Color of Law: A Forgotten History of how the Government Segregated America. The book, nominated for a National Book Award, details how the US government adopted policies to promote segregation through public housing projects in the mid-20th century. Rothstein offers ideas on what steps to be taken to remedy the effects of residential segregation, starting with accurately teaching this history at schools.

On Repealing DACA
"The cruel decision to end the DACA program after five years of measurable and heartfelt success is yet another wrong choice," writes 2016 Haas Institute Summer Fellow Kemi Bellow. "One rooted in an inconsolable fear of the loss of white power."

The Geography of Islamophobia
Discussions of racial geographies in the US have only just begun exploring questions related to the impacts of everyday racism on how racialized groups navigate spaces, writes 2017 summer fellow Rhonda Itaoui. "Examining and addressing questions such as this not only drives the groundwork required to protect Muslim sites and people from discrimination, but also interrogates the deeper geographies of power that reproduce racism in urban spaces for all groups."

Challenging Trump's Travel Ban
Trump's refugee and immigration executive orders are unconstitutional and anti-humanitarian, writes Haas Institute assistant director Stephen Menendian. "Nation-states have the authority to develop procedures and rules for whom they decide to admit into their borders, but treating members of a group differently because of their identity or beliefs is antithetical to our constitution and our values."