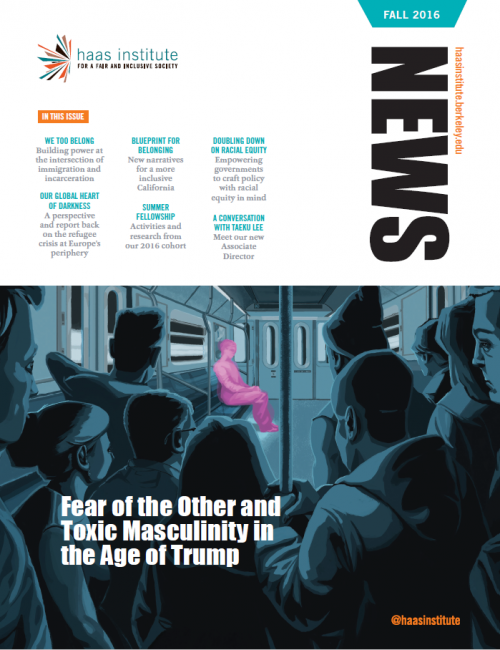 This edition of the Haas Institute newsletter, which covers activities from Jan. 1–August 31, 2016, features articles on fear of the Other and toxic masculinity in the age of Trump, many updates on our programs and projects, the latest news on our faculty clusters, and much more. Download the issue. Below is the introductory letter to this issue from our Director john a. powell.

Director's Letter from john a. powell

Across the globe, we are witnessing movements and currents of thought that are destabilizing the existing order and the calcified institutions of the 20th century. The results of the 2016 presidential election in the United States has surfaced these currents, making our work to foster a fair and more inclusive society more urgent and necessary than ever.

Nationalist movements and anti-immigrant sentiment across the political spectrum thoroughly informed the Brexit vote and is part of the same force that propelled Donald Trump to the presidency. These movements and currents are arriving simultaneously; presenting a crisis may yet out shadow that of the great recession of 2007. In 2007, the recession was primarily economic. Governments and central banks responded to the crisis, and while the recovery is ongoing, those institutions proved resilient.

Trump represents the apotheosis of ‘Othering” in the American electorate and broader society, simultaneously appealing to anxiety of the Other while stoking fear and division, as illustrated in this issue's feature story, which explores how toxic masculinity, combined with racial anxiety, has fueled a deep fear of the Other. This is the season of the demagogue.

The turmoil now roiling the globe, from the global migration crisis to rising nationalism, is the confluence of many simultaneously crises, but lying at the heart of them is inequality and inter-group conflict. Our politicians and leaders have struggled to articulate and describe these trends, let alone formulate coherent strategies for addressing them. The traditional ways of knowing and thinking seem inadequate to the moment.

In an interview shortly after the Paris terror attacks, in which he refused to use the term “Islamophobia,” French prime minister Manuel Valls said that “[i]t’s difficult to construct a single term that captures the variegated expressions of a broad prejudice.”

In our recently launched journal, we proposed an answer: Othering. Othering inclusively captures the many expressions of human difference and group-based marginality upon which virtually all of the global conflicts we are seeing now are shaped, and Belonging is a necessary response to create inclusive structures and institutions. The issues I have been working on throughout my professional life have perhaps never had more social or political salience.

Whether looking at the refugee crisis in Europe or Southeast Asia, police violence in the United States, the rising tide of xenophobia in the west, or the extremis of toxic inequality as a result of long-term economic forces, we cannot understand these trends as only isolated by race, group, or region.

Our new Inclusiveness Index, which we released in 2016, is a diagnostic tool that will help us better assess and understand our relative performance across the full range of human differences, and to better inform how we might redirect our efforts in a more inclusive direction. And our Othering & Belonging Conference, which will be held in next spring (see otheringandbelonging.org), will also explore these themes more deeply.  Creating a more inclusive society requires us to challenge Othering and requires all of us to belong.