DURING THE FINANCIAL CRISIS, most municipal bond insurers became insolvent or received multiplenotch downgrades. As a result, they ceased writing new policies. To the extent that bond insurers were rated lower than most municipalities, they could no longer offer government bond issuers the opportunity to achieve lower financing costs through a rating enhancement.

By late 2009, only one insurer was still active in the US municipal market: Assured Guaranty which had acquired Financial Security Assurance (FSA) earlier that year.17 Assured and FSA had higher ratings than other insurers and hoped that a merger would strengthen the combined entity’s case for retaining these relatively high ratings.

In October 2010, S&P downgraded the combined entity—Assured Guaranty Municipal (AGM) —from AAA to AA+. In November 2011, S&P imposed a further two notch downgrade to AA-, placing its assessment on a par with Moody’s, which rated AGM Aa3 at the time.18

The two agencies then diverged. In January 2013, Moody’s downgraded AGM by two notches to A2.19 In March 2014, S&P upgraded AGM one notch to AA,20 widening the gap between the two rating agencies to three notches. The S&P upgrade, together with a rating of AA+ from Kroll Bond Rating Agency is allowing AGM to expand its business.

According to AGM’s financial statements21, the company insured $12.3 billion of US public finance securities in 2014, producing $127 million of premium income. AGM’s premiums thus represent just over 1 percent of the face value of the bonds it insured. (It is worth noting that this percentage reflects a one-time payment and is not comparable to the interest rate spreads discussed in the previous section.)

National Public Finance Guarantee Corporation (NPFG), a subsidiary of MBIA, began to issue new policies in late 2014, a few months after Standard & Poor’s upgraded the insurer from A to AA-.22 Moody’s also upgraded NPFG from Baa1 to A3, but that still left the firm’s rating below those of most US municipal bond issuers.23 By the end of the year NPFG had insured $400 million in new bonds24 with total premiums of $6.5 million.25 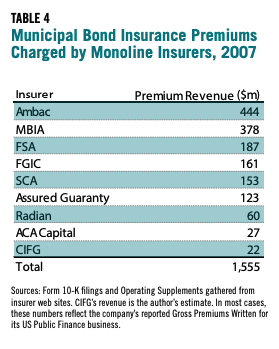 In 2012, a new insurer with a different organizational model entered the industry. The New York State Insurance Department licensed Build America Mutual Insurance Company (BAM) on July 23, 2012.26 On the same day, the firm received a Standard & Poor’s rating of AA.27 The new company, with no operating record, thus received a higher rating than thousands of municipal bond issuers, many of whom had been servicing debt obligations for several decades without missing any payments.

This is an attractive model in theory because there is no redistribution of wealth from municipalities to third-party shareholders. But in practice, this distinction from traditional municipal bond insurance proves to be without a meaningful difference.

In 2014, BAM underwrote $7.8 billion of insurance and charged municipalities $31.7 million of premiums and “member surplus collections.”28 But it incurred $37.4 million in operating expenses, including $24.5 million in salaries.29 Consequently, BAM experienced an operating loss and was thus not in a position to make dividend payments.

Further, BAM does not retain a large portion of its premium revenue, but instead cedes it to a reinsurance company that would contribute to the settlement of any claims. BAM’s reinsurer is a subsidiary of White Mountains Insurance Group, a for-profit Bermuda-domiciled financial services holding company.30 In 2014, BAM ceded $11.8 million in premiums to this reinsurer.

Thus it is reasonable to treat BAM’s entire $31.7 million of revenue—representing roughly 0.4 percent of the face value of bonds it insured—as a cost to municipal issuers. Although BAM is a mutual company, it is likely that the firm’s reinsurer and management will continue to absorb all revenues—leaving nothing for its nominal owners (i.e. the insured governments).

With insurers now receiving rating upgrades, it is likely that the use of municipal bond insurance will grow in the coming years. That said, it is hard to see how the business can return to the levels that prevailed prior to the recession unless insurers can once again obtain AAA ratings

A relatively new entrant into the ratings space, Kroll Bond Rating Agency (KBRA), has assigned AA+ ratings to both AGM31 and NPFG32 – higher than S&P’s ratings and several notches above those assigned by Moody’s. It is possible that KBRA’s actions could result in competition among rating agencies to justify higher ratings for these firms. This phenomenon, known as ratings shopping, contributed to the inflated ratings of mortgage backed securities that triggered the financial crisis.

Monoline insurers have also restructured themselves in an effort to justify higher ratings. For example, MBIA formed NPFG to be a dedicated public finance insurer, with no exposure to structured finance securities.33 MBIA can thus make the case that NPFG is insulated from the CDOs and other unorthodox instruments that caused the company so much difficulty in 2007 and 2008.

Given these trends, annual municipal bond insurance revenues should rise well beyond their 2014 level in the years ahead—in absence of industry reform.