THE WORLD HAS BEEN witnessing the largest waves of forced migration (within and beyond national boundaries) seen in nearly a century. In 2015, an influx of people seeking asylum—largely from Africa, the Middle East, and South Asia—made the journey to Europe by way of the Aegean Sea, the Mediterranean Sea, and Southeast Europe.2 In the United States, recent attention has been directed toward the flow of unauthorized immigration at its southern border, where the number of migrants from Mexico, Central America, and South America seeking protection has risen steeply.3

Media attention has generally focused on Europe, the United States, Canada, Australia, and other parts of the Global North opening or closing their borders to these and other asylum seekers from across the Global South—from Africa, Asia, South and Central America, and island nations across the Indian and Pacific oceans. Yet far less attention has been paid to the proximate and structural causes of such displacement, including war and armed conflicts, political instability, extreme inequality and austerity measures, and land dispossession.

Nearly absent within the mainstream public discourse is recognition and coverage of the role of the climate crisis in driving and exacerbating mass movements of people via short-term and long-term natural disasters. Estimates of the extent of climate-induced global migration vary significantly, but the numbers remain alarming. According to the Norwegian Refugee Council’s Internal Displacement Monitoring Centre (IDMC), there were 28 million internally displaced persons (displaced persons who remain within the affected state) in 2018 due to conflict, violence, and disasters.4 Weather-related hazards triggered the vast majority of the new displacements (17.2 million), with storms and tropical cyclones accounting for 9.3 million displacements and floods accounting for 5.4 million displacements.5 According to the IDMC, over 253.7 million people have been displaced by natural disasters from 2008 to 2018, with such disasters displacing three to 10 times more people than conflict and war worldwide.6 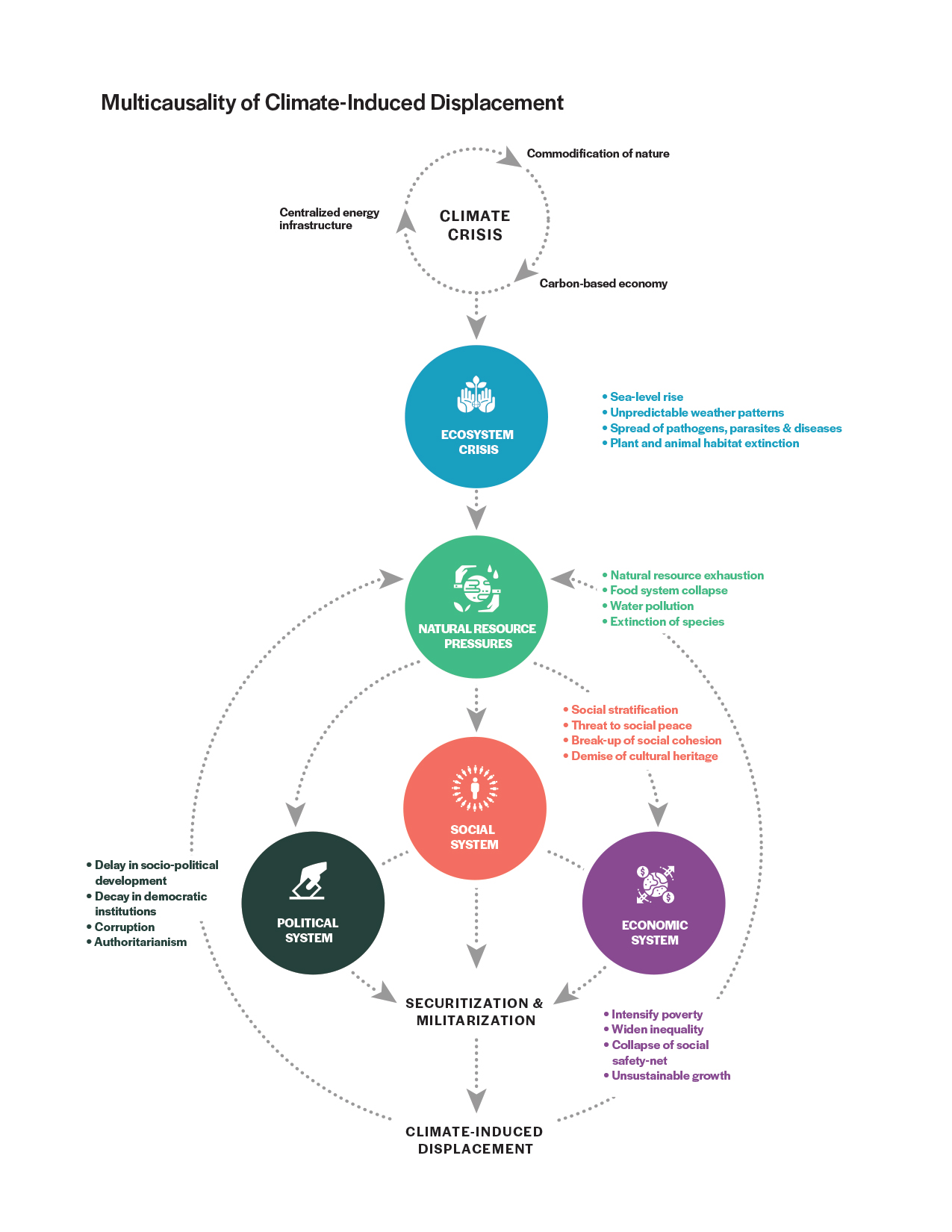 Although the number of climate-induced displaced persons across national borders is much harder to identify, international and intranational climate-induced displacement is projected to increase due to more frequent and intense weather events and long-term environmental changes such as land loss due to sea-level rise and desertification.7 The landslides that ravaged Sierra Leone and the hurricane season that devastated the United States and the Caribbean in 2017, and the severe drought in Afghanistan and flooding in the Philippines in 2018 have given us a glimpse of this future.

Although the number of people fleeing their homes due to environmental changes grows, these “climate refugees”—a still contested term—continue to be denied international refugee status and afforded adequate protections within their country of origin. Even for those people who are in agreement that climate-induced displaced persons are in dire need of protections, the reasons are manifold: climate migration is mainly internal; isolating environment/climatic reasons is difficult especially vis-à-vis humanitarian, political, social, conflict, or economic reasons; opening the 1951 Refugee Convention may be politically unfeasible and it weakens existing refugee status; and other humanitarian avenues may be available.8

Thus, across international humanitarian law, human rights law, refugee law, and other bodies of law, protections for climate-induced displaced persons forced to cross international borders are limited, piecemeal, and not legally binding. International migration following short-term disasters is only occasionally protected under humanitarian visas and state-specific measures as with the United States’ Temporary Protected Status designation, though such protections are often provisional and not legally binding.

Likewise, international migration following long-term disasters is not covered unless the provision of support by the local government (or governments) is denied on the basis of race, religion, membership of a particular social group, or political opinion. At the same time, the nature of climate-induced migration is changing altogether. The severity and duration of natural disasters are increasing to the point where peoples’ homelands around the world are no longer habitable and resettlement may need to be permanent. 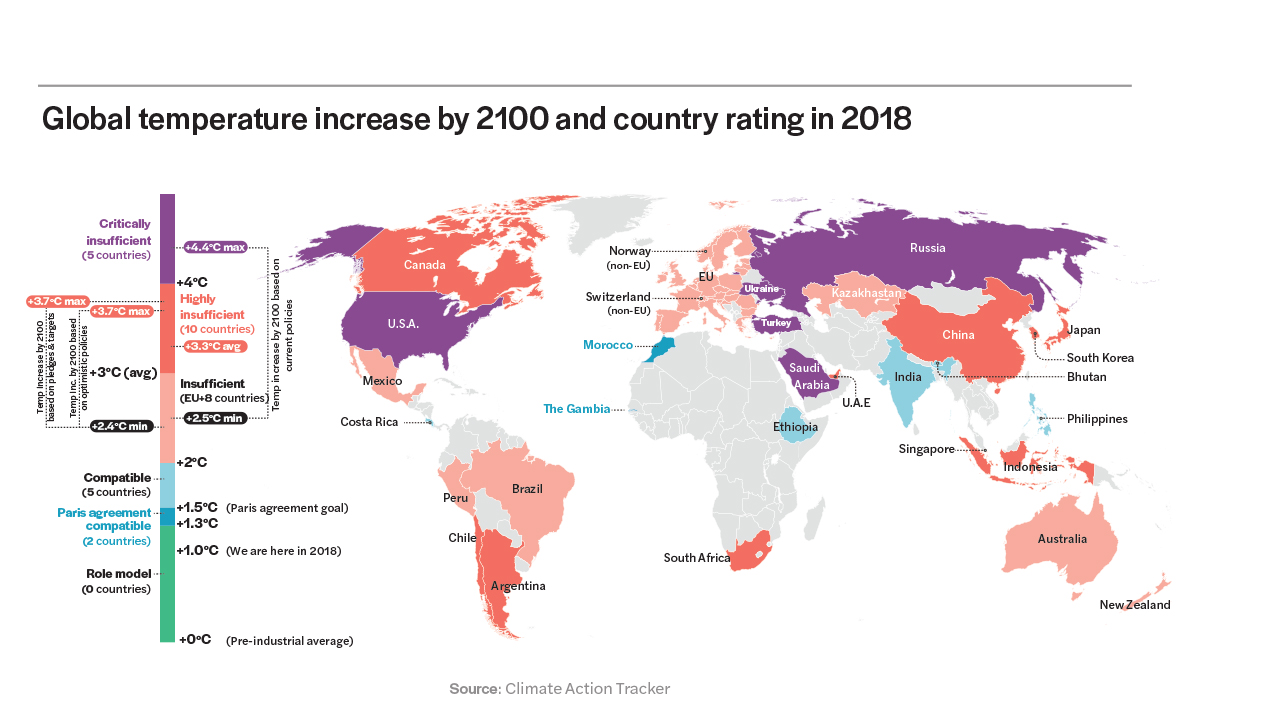 This report argues that a comprehensive legal framework for climate-induced displaced persons forced to cross international borders—“climate refugees”—is necessary. This report also argues that such a framework need be applicable to two specific situations:

In order to aid efforts to develop an international refugee protection regime that includes protections for climate refugees—be it a new convention or a revision to the existing 1951 Refugee Convention—this report recounts the proximate causes of climate-induced displacement and the added population pressures that follow such displacement. This report then elaborates on gaps in the current protection regime for climate-induced cross-border migration and discusses legal debates around the term “climate refugee” in light of such gaps.

Toward such ends, this report then targets a key condition for refugee status: “persecution.” Presently, the refugee paradigm hinges on the “actor” of persecution originating from the territory where the displacement is occurring. As the climate crisis intensifies, however, the paradigm gets complicated, as the drivers of the climate crisis—including methane released from landfills, natural gas and petroleum industries, agriculture and livestock, and deforestation—are not necessarily where one’s safety or well-being are most threatened due to the effects of the climate crisis. Thus, required is a new understanding of “persecution” that could account for the severe nature of the climate crisis and climate-induced displacement, and serve as the basis for a normative framing of climate refugee protection.

This report advances a new deterritorialized understanding of “persecution” under the climate crisis, which accounts for the ability of one to survive and avail themselves of a sufficient degree of protection within their country of origin. It does so while recognizing that the “actors” of persecution and the respective climate crisis impacts are fundamentally indeterminable. Although the climate is changing due to a number of sources, this report focuses on the “persecution” that is built into our global dependence on petroleum, coal, natural gas, and other fossil fuels, and the global investment patterns behind this dependence. In short: “petro-persecution.” This analysis guides the report’s recommendations on the ways in which legal scholars, policy-makers, researchers, and others can fashion a comprehensive protection regime for climate refugees.