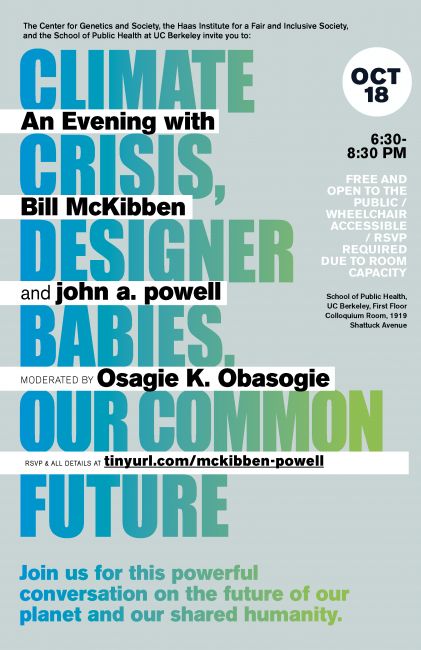 The Center for Genetics and Society, the Haas Institute for a Fair and Inclusive Society, and the School of Public Health at UC Berkeley are pleased to host a conversation between john a. powell and Bill McKibben, two advocates and scholars who have written extensively about why we must join together to secure a just and fair future — before it’s too late. Join them in person for “Climate Crisis, Designer Babies, Our Common Future.”

The harms of climate catastrophe and creating genetically engineered humans would not be equally distributed. Both are challenges to social justice; how we handle them will shape the future of our planet and our species. Falter , the new book by Bill McKibben, explores the ideological commitments and political tendencies that have allowed these dangerous trends to develop unchecked. john a. powell’s writings on race, social justice, and spirituality chart a path toward a social order of inclusion and belonging that celebrates our commonalities and our differences.

To register for this event, please fill out the form on this page.