Please join us for a moderated panel discussion to commemorate the centenary of the Tulsa Race Massacre, which occurred in 1921 in the Greenwood District of Tulsa, Oklahoma in an area known as “Black Wall Street.” Although the massacre is not found in most American history books, it is widely regarded as one of the most terrifying events of racial violence to occur in the US. Armed, white mobs murdered hundreds of Blacks and set fire to a prosperous Black area, the Greenwood District, both displacing and economically devastating thousands of Black residents. While many of the exact details are unknown, recent excavations to locate mass burial sites and interviews with descendants of Black residents are shedding more light onto these events. 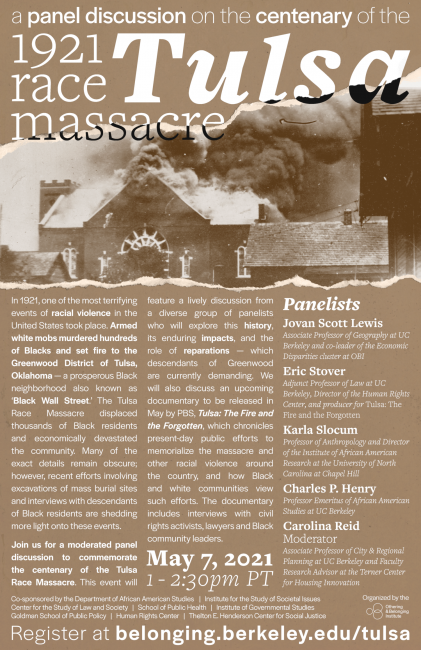 This centenary event will feature a lively discussion from a diverse group of panelists who will explore this history, its enduring impacts, and reparations -- which descendants of Greenwood are currently demanding. One of the highlights of the panel will be to discuss an upcoming documentary to be released in May by PBS Tulsa: The Fire and the Forgotten which chronicles present-day public efforts to memorialize the Tulsa Race Massacre and other racial violence around the country, and how Black and white communities view such efforts. The documentary includes interviews with civil rights activists, lawyers and Black community leaders. In addition, Eric Stover, who has investigated numerous acts of genocide and mass murder over many decades, speaks with Tulsa natives and surveys the current excavation and search for mass graves.

The panelists for the event include Jovan Scott Lewis, Associate Professor of Geography at UC Berkeley and co-leader of the Economic Disparities cluster at OBI; Eric Stover, Adjunct Professor of Law and Director, Human Rights Center and producer for Tulsa: The Fire and the Forgotten; Karla Slocum, Professor of Anthropology and Director, Institute of African American Research at University of North Carolina at Chapel Hill; and Charles P. Henry, Professor Emeritus of African American Studies, UC Berkeley. It will be moderated by Carolina Reid,
Associate Professor of City & Regional Planning at UC Berkeley and Faculty Research Advisor at the Terner Center for Housing Innovation.