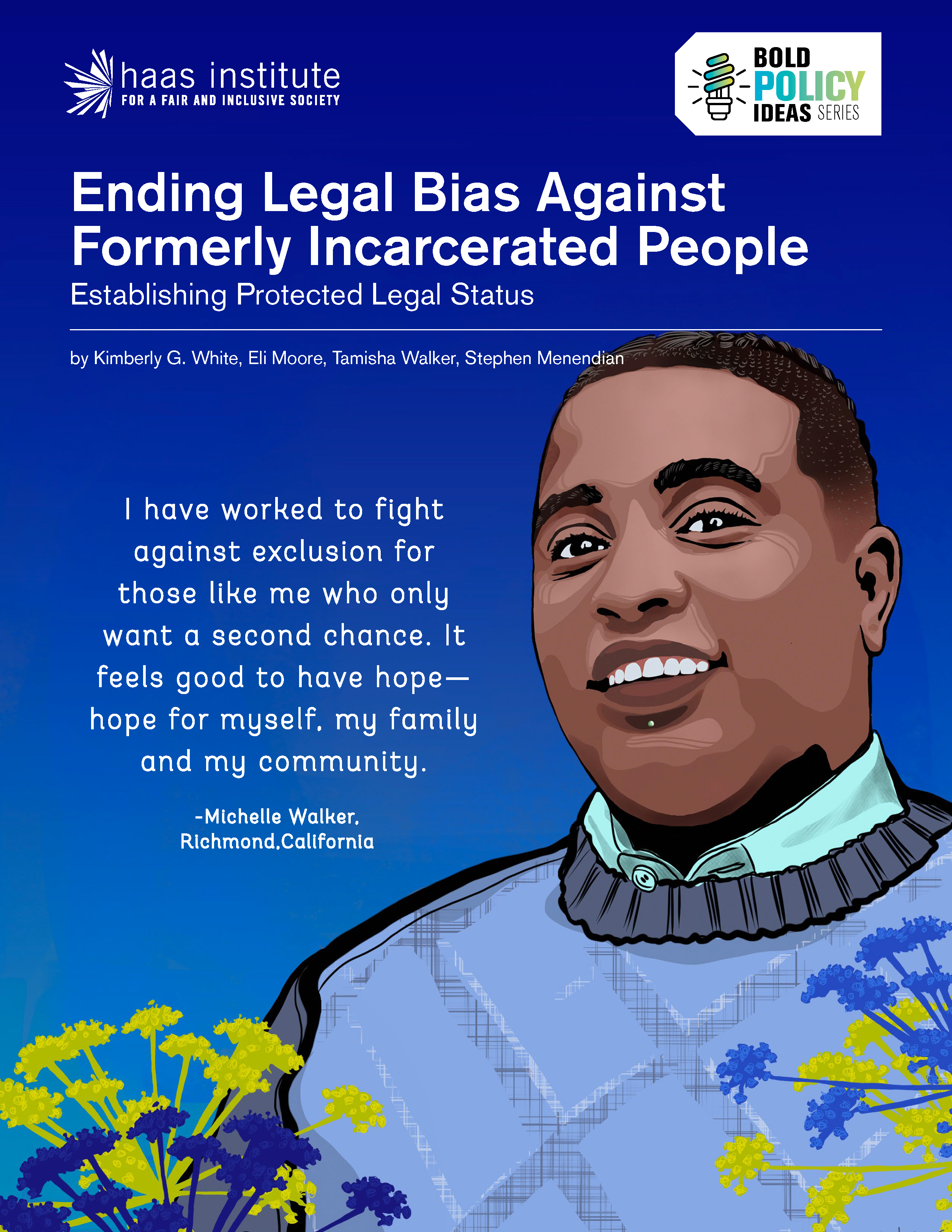 This brief is the first part of the Bold Policy Series published by the Haas Institute for a Fair and Inclusive Society at UC Berkeley. Download a PDF of the brief here. Or read a web version here.

What ideas exist that can rise to the scale of entrenched and emergent social problems and injustices? This new Bold Policy Ideas series focuses on that question with a new series of brief reports that elevate policy ideas that, if adopted, would have a wide-reaching transformative effect on structural problems—problems that are perpetuated by multiple institutions and powerful financial incentives. Bold policy ideas can encapsulate new narratives that expand current public debates as they illuminate a long-term vision.

Whether applying for a job or apartment, accessing public services or taking care of their children, formerly incarcerated people face tremendous challenges when returning to their communities. Instead of a smooth integration back into society, formerly incarcerated people often encounter a seemingly endless succession of barriers, and public and private discrimination, which are compounded when the person is a member of a marginalized or historically disadvantaged group. Over 40,000 such barriers exist across the country, according to the National Inventory of Collateral Consequences of Conviction. These challenges not only make it difficult for formerly incarcerated people to re-integrate, but also to meet basic needs or fulfill communal obligations. Thirty percent of the adult population in the United States has a criminal record.

With growing recognition of these challenges, formerly incarcerated people and their allies have won major changes to policies and practices over the last decade, removing some of the barriers to employment, housing, voting rights, and more. Grassroots leaders from the Safe Return Project, an organization of formerly incarcerated people in Contra Costa County, California, have raised the concern that if these wins only remove barriers one by one, it will take generations to restore people’s full rights and freedom.

This policy brief explores a mechanism for broadly advancing the rights of formerly incarcerated people across the board, as an alternative to incremental approaches which seek to overturn legalized disadvantages or remove barriers in individual domains. Specifically, we explore the possibility of establishing formerly incarcerated people as a protected status under municipal, state, and federal law. The brief begins by reviewing “collateral consequences” of incarceration—the plethora of barriers that are triggered by a criminal conviction and restrict formerly incarcerated people from accessing resources necessary for their well-being. Next, we set out the legal context for advancing “protected legal status” for formerly incarcerated people, which could prevent private individuals, corporations, and government bodies and agencies from enacting laws or taking actions that discriminate against them. We then explore the potential for adopting this protection at various levels or branches of government. Through this analysis, we hope to contribute to awareness of the potential benefits of achieving such a policy change, pathways to establishing the policy, and challenges that could be faced along the way.

The authors are grateful for the insights shared by various advocates, legal experts, and formerly incarcerated community leaders that shaped this brief. Without the organizing of a movement to transform mass incarceration and racial inequities, and the practice of participatory research and engaged scholarship, ideas like this would rarely come to light or have the possibility of becoming reality.