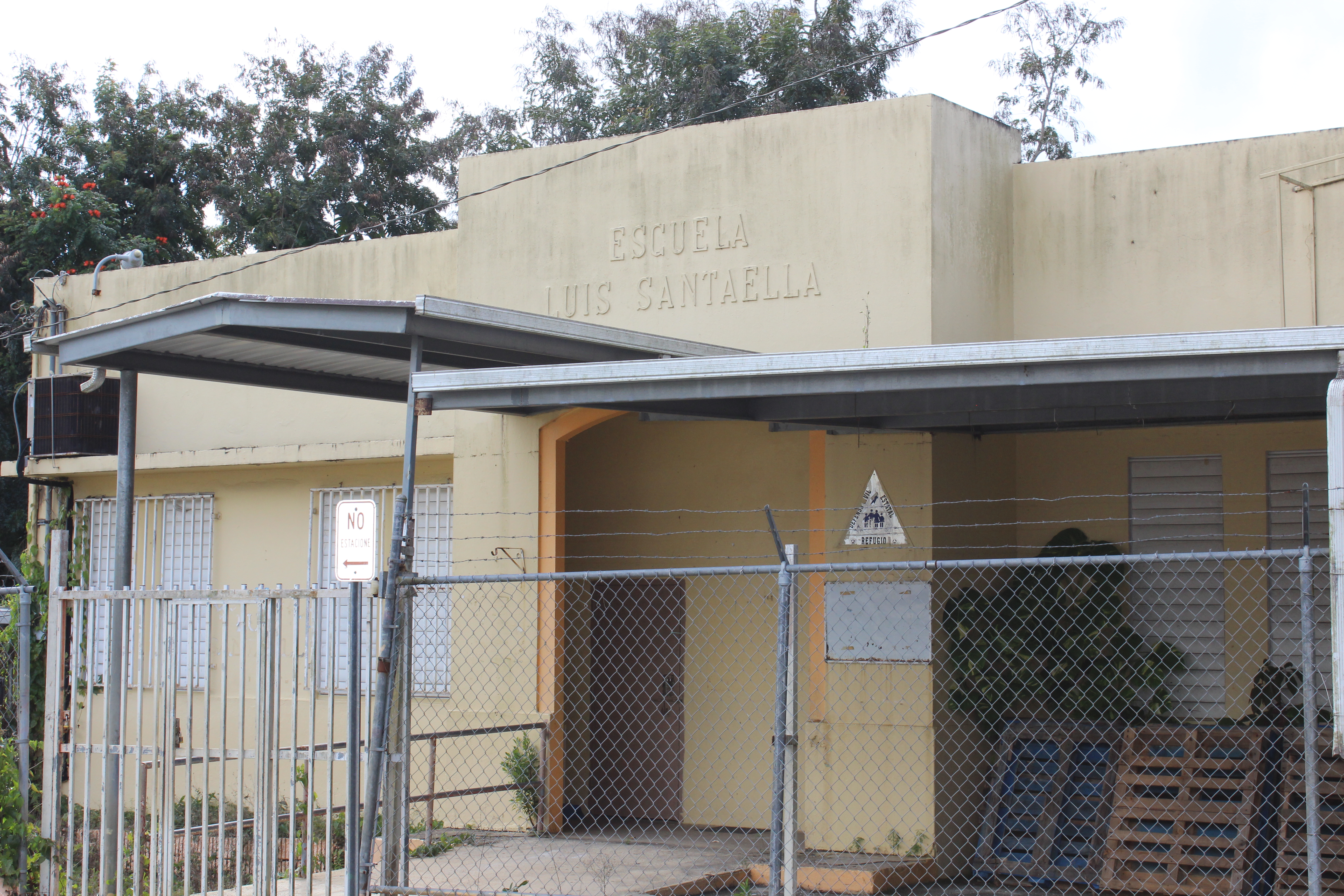 Escuela Luis Santaella, a shut down school outside of San Juan, Puerto Rico.

Nearly half of the public schools in Puerto Rico have been closed in just nine years, an unprecedented elimination of public education facilities in recent US history. The impact on students, families, and surrounding neighborhoods is profound, according to community leaders and local experts who met with a team from the Haas Institute in April of 2019.

“Schools are supposed to be a monument to our history,” Marina Moscoso Arabía shared as she showed us around the Goyco elementary school in the capital, San Juan. The school was named after Pedro G. Goyco, a nineteenth century political leader and abolitionist, who was buried under the school, according to Moscoso.

In 2016, parents of the students at Goyco received a letter notifying them the school would be closed within two months. There was no public meeting, consultation with parents before the decision was made, or organized process to re-assign students to new schools.

Some parents and volunteers felt the effort to close the school had started earlier with actions by the administration to disinvest and make the school unbearable, including forcing students to eat lunch in the un-shaded courtyard during the hottest part of the day while the school lacked running potable water. The school had four different principals in the year before it closed, and volunteer projects like planting trees in the barren yard were denied permission.

What does it mean for a community to close a school?

Long-standing neighborhood schools have great meaning for local families. One woman whose grandchildren attended a closed school in the mountainous town of Aguas Buenas had also attended the same school decades earlier—creating a deeply personal and generational connection that has been lost since the school’s closure. In a relevant study of majority Latino schools in Santa Barbara, California, there was a 29 percent drop in parent participation in the new schools after their children’s original schools closed. Parents reported that they participated more in the previous schools pre-closure because of the sense of neighborhood community, including cultural activities and proximity, illustrating how the loss of belonging negatively affects parent involvement.

In rural areas where low income families do not have cars, the additional distance to a new school can be costly. “The cost on families is higher now that we have to transport the kids farther and pay someone to pick them up,” reported one parent in a rural area of Puerto Rico. As new schools are almost always farther away, families experience longer travel times and greater expenses, which can force an entire family to change their routine and search for pooled resources, such as needing to coordinate borrowing a car from a neighbor in order to get their children to the new school.

Sixty-five percent of the Puerto Rican schools closed since 2006 were located in rural areas. As travel time to school increases, students are less able to participate in both extra-curricular and in-home activities, have less time for homework, and when the commute is over 30 minutes, it impacts both the student and their whole family.

Youth in custody of the state have been uniquely affected in Puerto Rico because changing schools often means caseworkers are changed and access to special services or programs are lost, according to Puerto Rico’s Red para Derechos de Niños y Juventud, an association of service providers. Special needs students are even more impacted by school closures, as was witnessed in Chicago where schools that special needs students were forced to attend were not prepared with staff and services to teach and provide special education to them. Increased traumatic violence, such as assaults on students traveling to their new school through neighborhoods with rivaling gangs, has been reported by parents and their children  who attend new schools due to closures in Philadelphia, Kansas City, and Chicago.

Schools in Puerto Rico are essential community centers: they serve as shelters during hurricanes, become voting centers during elections, and provide a place of connection where parents and neighbors build trusting relationships with each other. They also serve as public health sites when there is an outbreak of dengue and other illnesses, becoming a central location to provide information and treatment. Closed schools means the loss of these valuable community functions.

School closures can also exacerbate racial segregation and inequality. In a study of Richmond, Virginia’s school district from 2006 to 2010, school closures were associated with higher levels of segregation, going from a .65 to .7 score for the white-Black dissimilarity index, considered “highly segregated.”

Testimonials on the absence of a planning process leading up to and following the school closures in Puerto Rico repeat a central concern: “There was no study about the local context, what was needed, and how the school closure would affect us, so there was no plan for making the closures work,” as one community leader put it. A similar dynamic was documented in Richmond, Virginia, where the process for closing schools “drove a rapid and antagonistic decision-making process that minimized broad-based public participation.” Pew Charitable Trusts’ Philadelphia study warns that such quick and opaque decision-making processes, which lack community input, can further increase distrust in both the school district and government in general, even leading to the ousting of public officials.

Why close the schools?

The reasons for closing the schools commonly cited by Puerto Rico’s Department of Education, governor, and others have been the island’s falling population and enormous debt, although local leaders had yet to see any formal criteria or transparent process for deciding which schools to close.

The number of students in the public schools had already been falling by about 20,000 per year for 10 years, to a total of just over 346,000 students, when hurricanes Maria and Irma hit in 2017. This parallels a loss in the total population on the island, which has decreased by at least 14 percent since 2010. The damage caused by the hurricanes only intensified the outward migration. Between 2009 and 2018 the education department had already closed more than one-quarter of the schools, leaving only 855 schools open. Abruptly before the 2018 school year began, another 23 percent of schools in 258 communities were closed. The population is falling, that much is clear. What is unclear is whether this necessitated the closing of 654 schools. Reduced student populations can generate creative approaches, including combining classes within schools.

Beginning in 2008, Puerto Rico’s economy declined for eight of the subsequent 10 years. The recession intensified a trend of government expenses exceeding revenue, leading to a growing public debt that ultimately reached $70 billion. After several waves of school closures, in 2019 the Financial Oversight and Management Board announced it would not close a planned 300 additional schools in the coming year because, in fact, the closures had not achieved the expected cost savings.

Some fear that the untold reason for the closures is to facilitate a transition to a charter school system that privatizes the education system. In 2018, just six months after the hurricanes, the governor adopted a law allowing for charters as well as vouchers for private schools. Months later, Frank Brogan, US assistant secretary for elementary and secondary education, praised Puerto Rico for paving the way for charter schools. Some local leaders suspect that the school closures accomplish a consolidation of students into larger schools that will be more profitable for future private charter school companies.

What happens to the schools now?

By many accounts, Puerto Rico’s public schools were not in great shape before the closings. One community leader stated plainly, “Everyone who can afford it sends their kids to private schools.”

According to John B. King, former US Secretary of Education, “The system has long suffered from a lack of investment and the consequences of that lack of investment are lack of opportunity for students.” In this sense, the school closures and austerity policies can be seen as a continuation, not a break from the past.

Some communities are wrestling with what to do with the buildings of the closed schools. “There hasn’t been a study or plan for how to use the closed school buildings, including considering what the community needs and how to plan the re-use,” reported one leader. Most abandoned school buildings are still unused and have become blighted. Others have been adopted for other uses, such as an improvised horse stable for nearby residents.

In some areas, parents are working to re-open their closed school. “The community fought for four years to keep the school open. We were told that the closure was going to happen, that it was a done deal. They did close it, but we are still fighting to re-open it,” shared a parent in Aguas Buenas.

Conversion to public Montessori schools has emerged as an alternative approach to transforming Puerto Rico’s education system. Interestingly, the movement’s roots include a round of school closures over 25 years ago when the town of Guaynabo successfully organized to keep its school open, which they then converted to a public Montessori.

Education is not the only area where the community is organizing and advancing bold visions that will transform public systems to resolve major problems. Puerto Rican leaders have developed plans to convert the island’s energy system to 100 percent renewable, resolve widespread property title issues without displacing residents, and innovate across sectors. Rising to face large-scale challenges does not require that communities become collateral damage, and transformative solutions do not have to mean a transition away from the public sphere and a ceding of power to private interests.

The impact of the school closures is profoundly concerning, but the story is not over. Puerto Rico’s struggles are an extreme version of challenges across the country and much of the world, so the solutions and outcomes on the island will become lessons across geography.

One thing is certain: “The way you treat the children is going to come back to you very soon,” as Ana Maria, director of the Instituto para la Escuela Nueva, prophetically told us.

The Haas Institute for a Fair and Inclusive Society is working in partnership with Centro para la Reconstrucción del Habitat, a Puerto Rican nonprofit organization working to promote the responsible management and reuse of abandoned and vacant properties on the island.