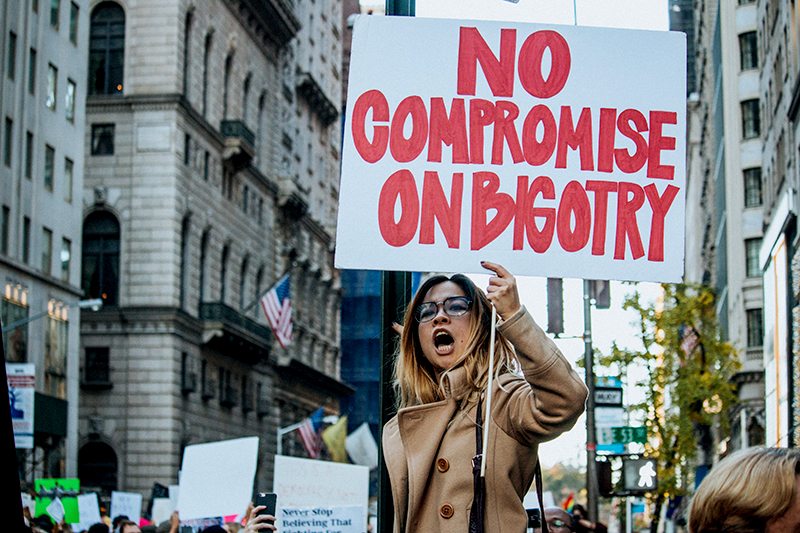 [Lead photo credit: Mathias Wasick, Creative Commons License via Flickr]
Where did the term “Alt-right” come from and how did it get into popular use? It turns out “Alt-right” was a recent invention, poking its head into social media five years ago, then breaking into national media outlets over the last year. It represents a white nationalist network’s ability to disguise, rebrand, and reinvent itself into something more palatable to the general public. The ideas of white nationalism remain, yet the stigma associated with that term are left behind as the network adopts a trendier and less threatening new identity: the “Alt-right.”

Looking at the trend in Google searches for the term, “Alt-right” was hardly explored at all up until August of this year, when curiosity about the term spiked.

The usage of the term “Alternative Right” can be traced to a 2008 speech by Paul Gottfried, “The Decline and Rise of the Alternative Right.” The abbreviated “Alt-right” was coined later that year by Richard Spencer, a white nationalist, according to the Southern Poverty Law Center. Its first use as a hashtag on Twitter was in September 2011.

A study released last month analyzed the way white nationalists have used the internet chat room site 4Chan to organize themselves to influence discussion on the internet through “raids” on other websites like YouTube and Twitter. The researchers analyzed eight million posts on a discussion board used by many who identify with the “Alt-right.” Their analysis found that “users are performing raids in an attempt to disrupt the community of YouTube users” after their data showed that there was a substantial increase in hate speech on YouTube sites after users of 4Chan pointed each other to those sites.

“Alt-right” started appearing in media articles in early 2014. In January 2014, an article about the Tea Party in the Detroit Free Press made an off-hand mention that “the general agreement on the ‘Alt-right’ is that the Tea Party is controlled opposition.” At the end of 2015, the Daily Beast commented on Rush Limbaugh’s conversations on air with “Alt-right” callers: “The talk radio host may not know what the 'alternative right' is—but he gave it a huge endorsement last week.”

Hate speech and explicit bigotry is not accepted in most media outlets, so a new vocabulary has been invented that can more easily insert the ideology into media with wider distribution and credibility.

Chris Hayes of MSNBC brought up the Alt-right in late 2015: “I've been spending a fair amount of time in the recesses of white nationalist, white supremacist social media online areas, what called itself is the "Alt-right", which is sort of the euphemistic term they use for what is essentially modern day white supremacy.”

Multiple journalists and analysts have noted how white nationalists calling themselves the “Alt-right” saw Donald Trump as their ticket to national prominence and power. The use of the term in national media outlets and social media exploded in 2016, as it rode along the media frenzy around Donald Trump’s campaign.

Hate speech thrives in Internet chat rooms like 4Chan where anonymity and ephemerality disconnect comments from the identity of the speaker, preventing accountability. The chat rooms offer an environment of mutual ideological support, and a platform to launch and coordinate trolling elsewhere on the Internet. But hate speech and explicit bigotry is not accepted in most media outlets, so a new vocabulary was invented in order to more easily insert the ideology into media with wider distribution and credibility.

The term sounds so benign, it also refers to the keys on the computer keyboard when you click on “alt” and the right arrow. As a political term, it sounds like it must refer to an alternative to the Right. This is part of what its proponents say is part of their “taboo-defying rhetoric that have boosted its membership and made it impossible to ignore.” It is just one part of an extensive list of invented phrases that the network uses.

“Alt-right” members promote a white identity based on “ethnonationalism,” arguing that “white voters are going to go extinct” and it’s logical for them to advocate for their race. Rather than understanding people’s linked fate across racial boundaries and the prospect of a multi-racial democracy, the “Alt-right” would like to establish a fixed white racial identity and a value system based on racial hierarchy.

“Alt-right” is a re-branding of white nationalism and white supremacy that disconnects the ideology from the violent record of its history. This represents a move away from colorblind politics at the same time as it relies on much of the same premises. Colorblindness has held that racial categories should be ignored and identities should not reference race in any way. White nationalists would like to make race explicit again and embrace a white identity based on the old myth that racial categories are natural and races are in competition (in “Alt-right” lingo, this is referred to as “Human Biodiversity”). But it also relies on one of the key premises of colorblind politics—that we must ignore structural racism.

The term “Alt-right” represents an effort to disconnect white nationalism and white supremacy from the legacy of racist violence that these political ideologies have supported. This sanitizing of a political ideology helps re-establish white racial innocence by claiming that white nationalism is a virtue and political value that does not necessarily entail marginalization and violence against people of color.

Since “Alt-right” encompasses what is literally the definition of white nationalism, there is no need for the term. “White nationalists” should do just fine. Naming this ideology for what it is forces us to confront the way that ill-conceived colorblind politics left so many of us with no practice or comfort with a language to talk about race, racism, and whiteness. But we must see white nationalism for what it is, not what it pretends to be, and disrupt the cycle of its reinvention.