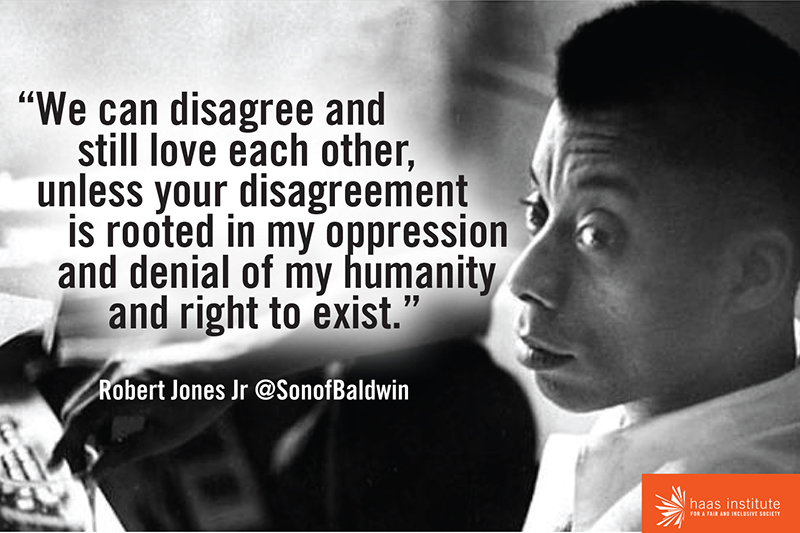 My, our, disagreement with Trump is in fact rooted in his support for oppression against people that he and his supporters see as other, and against their denial for their humanity and their right to exist.

Some have suggested that Trump may step away from some of his most hateful and vitriolic positions espoused during his presidential campaign. But his behavior throughout the campaign and since the election—regarding women, Muslims, Mexicans, immigrants, “the blacks,” people with disabilities, the very institutions of democracy as well as the earth itself—gives us pause before accepting that suggestion. And the hatefulness unleashed during the campaign has already caused real harm to many in our society, giving currency to our concerns.

For those who want to give Trump a chance, I say he must give us reason to give him a chance. It is not enough that someone comes into power through our democratic process and then gets to demand unquestioning support. Those in power have to work to earn our trust. So far Trump and his transition team have done nothing to indicate they are rebuilding the trust that has been severely eroded during the campaign season. He intends to put people in power who are on public record as being against many of the same people Trump attacked during the campaign, officials with the intention, one imagines, and the power, one knows, to turn those attacks into policy and law. I hope that Trump, by his words and deeds, clearly repudiates the hatred and otherness he built his campaign on. But we cannot simply judge people by what we wish them to be in the future and forget their past.

At this point in our history, there are many things we must be careful of as Trump steps into power. We cannot allow our institutions to normalize hatred and violence. We have to resist accepting leaders and policies that denigrate the humanity of any of us. This is all the more important as it has been both encouraged by Trump and may now be enacted from the instruments of government.

We also must not dehumanize Trump and those who support him. But accepting their humanity does not mean we accept their positions. We do not accept beliefs or policies that signify that any people are less than others. We cannot accept personal or institutional efforts to other anyone. We know there is suffering and anxiety in the America, but it is not limited to whites. This anxiety and suffering does not give us license to attack those thought of as different.

We know that there are many Americans who believe not only in American exceptionalism, but also in the supremacy of a white, Christian America. These values cannot co-exist within a healthy democracy. A healthy democracy requires equality and inclusion. Trump’s campaign was organized around a reactionary white identity based on fear of the other and exclusion. For those who want to move beyond identity politics, whatever that means, I suggest they focus on ending the white identity politics that carried Trump to “victory.”

We must be careful to remember this was not just another election. This election was not simply about the economy or what we have or have not, but about who we are and who belongs. Much of American history has been a struggle about who belongs, who could become full members. That struggle continues today.

While we are clear what we are against, we must also be clear who we are and what we stand for and believe in.

What we are for is human dignity and equality for all.

What we are for is creating a space that engages all who are interested in advocating for a government that works for all people and not just elites.

What we are for is building a society where the market and corporations serve people and respect the environment.

What we are for is a society where our highest values are not just for power or profit, but life with dignity.

What we are for is caring for each other and for our earth. Ours is a circle of concern that supports all of life, where all people belong, but not all values. We have to be and we will be deliberate in contesting values, policies, and systems based on oppression, exclusion, and dominance.

What we believe in is building bridges, not erecting walls. Instead of simply denying that people have different pasts and are situated differently in the present, bridging means we create additional space where we recognize our difference and sameness without denying either. It is only because of our sameness and difference that dialogue is necessary and possible. If we are just different, dialogue is not possible. If we are just the same, dialogue is not necessary. It is this dynamic of difference and sameness that makes bridging desirable. Bridging does not deny our suffering or the suffering of others, but builds a space where we can suffer and dream together.

What we are for is building a society where justice, love, and belonging are centered, where diversity is a strength, and where the humanity of all people is recognized.

What we are for, this work that we do, and the values that we stand for are not simple, nor are they simply won. But as James Baldwin also reminds us, “Words like freedom, justice, and democracy are not common concepts; on the contrary, they are rare. People are not born knowing what these are. It takes enormous… effort to arrive at the respect for other people that these words imply.”