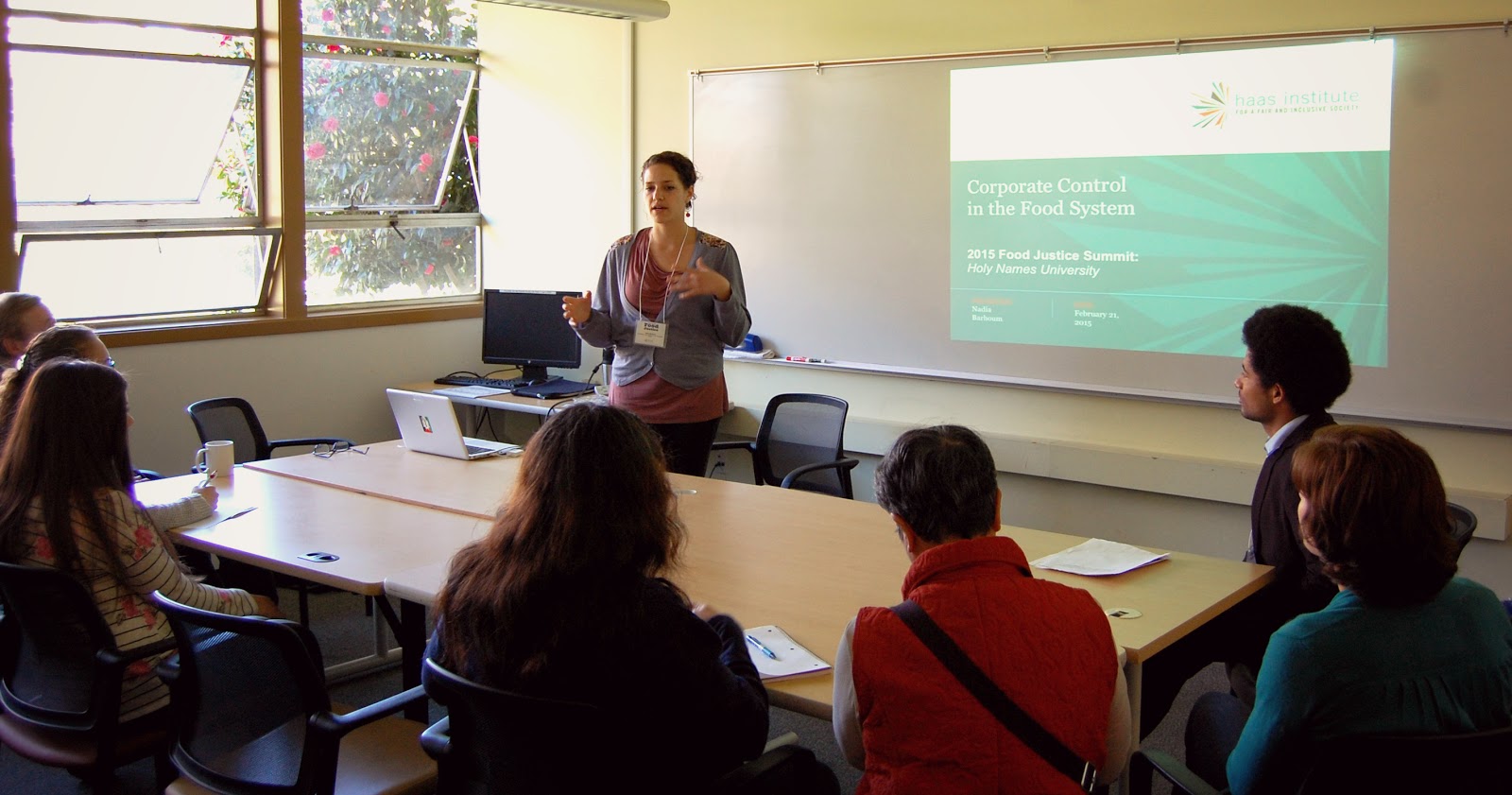 On February 21, 2015, the Haas Institute participated in an all-day Food Justice Forum organized by Holy Names University in Oakland, California. The program brought together social justice activists, high school and college students, educators, and community members "to think critically about the issues of food justice" and "bring new insight and inspiration to be an agent of positive social change in your community and beyond."

I presented a workshop on the role of corporations in the global food system. The workshop explored the rise of corporate control within the food system, beginning with the history of the "ABCD" (Archer Daniels Midland, Bunge, Cargill, and Dreyfuss) giants of the food corporations to the present-day consolidation of power throughout food supply chains. Corporate control is complex and must be looked at through a structural lens, by investigating the ways in which corporations have been able to gain power through such avenues as government, international trade policy, and finance.

The rising power of corporations has led to increased inequality within the food system, from heightened disparities in compensation and wages within corporate entities, to uneven development of agricultural commodities around the world. The health impact on individuals and the environment is part and parcel to the structural paradigm that corporate control has produced. Food chain workers are especially vulnerable to corporate power and face heightened food insecurity as a result of low wages, oftentimes without benefits, and poor labor conditions that impact their health and livelihoods.

As consumers, we also are faced with the illusion of choice, as most of the food products we purchase are owned by a mere handful of corporations. Corporations have been at the forefront of producing heavily processed foods high in sugar and fat, which have contributed to alarming increases in diabetes and obesity across the globe. Their targeted marketing and advertising usually mask the health risks and consequences of eating the unhealthy foods that they produce.

In addition, the practices of industrial agriculture that corporations support has had devastating impacts on the natural environment, leading to deforestation, water contamination, soil depletion, and carbon emissions (both from agriculture and transportation of commodities and agricultural inputs). Corporations have been able to gain and maintain power by wielding influence in politics, through special interest lobbies and campaign financing, as well as through academia and research, by funding university research, departments, and faculty positions. The resultant impact of this influence and power is the undermining of democracy and the democratic process both within the US and abroad. Herein lies an overwhelming need to realign corporations with democratic values that turn ideals of inclusion and equity into practice.

Many initiatives on the local, regional, national, and international scale have been tackling the issue of corporate control in order to restore the dignity of workers and consumers alike, as well as revitalize our ecosystems and environment. The only way forward for the future of the world’s population and planet is to engage in practices that honor sustainable, agroecological methods of farming and scale back the consumption, extraction, and exploitation of the world’s natural resources.