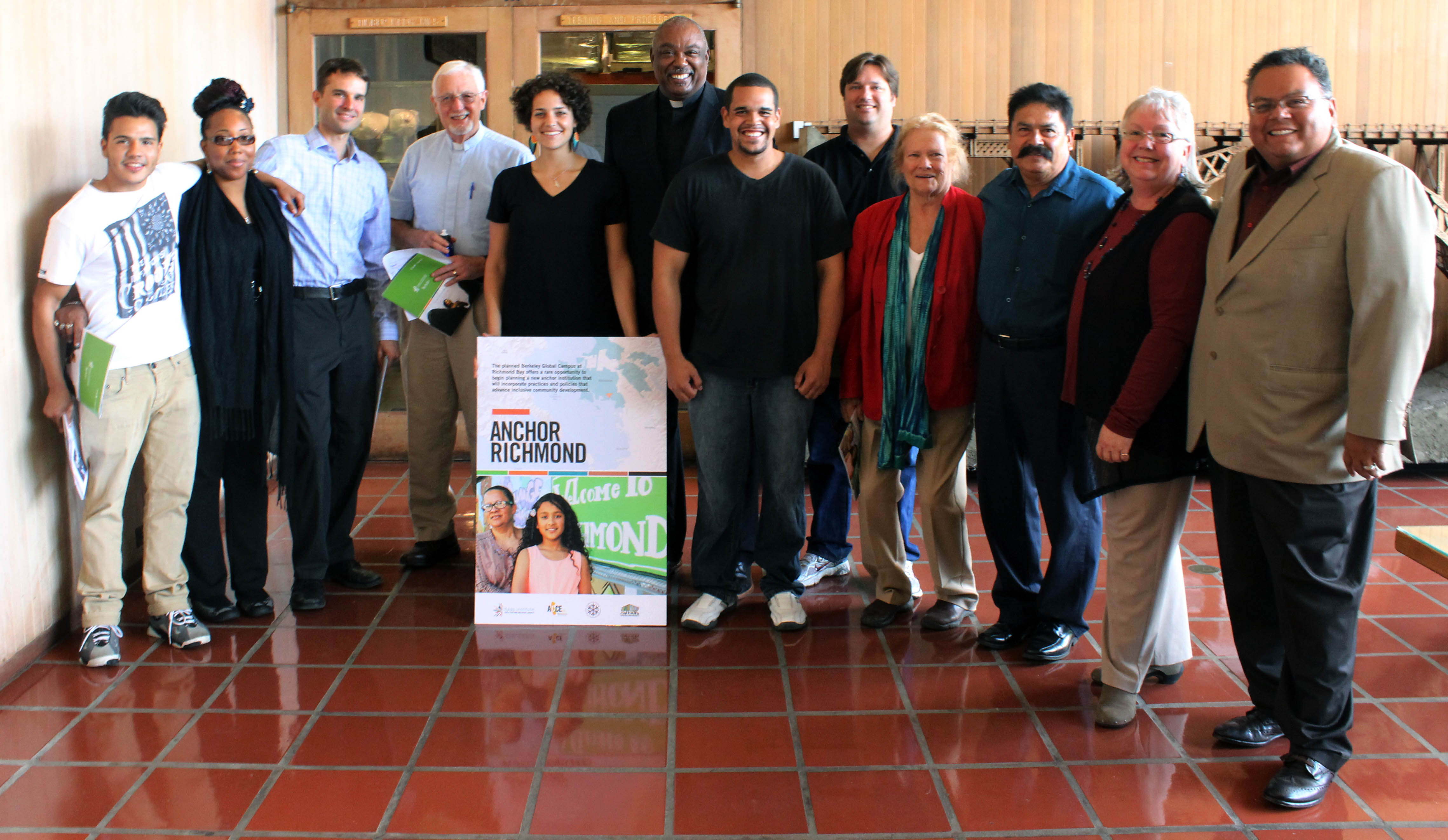 RICHMOND, CA – As a child, Pastor Donnell Jones remembers catching frogs in a creek not far from UC Berkeley’s Richmond Field Station near the Marina. As a young man, he remembers going to downtown Richmond for popcorn and hotdogs. For years, Richmond’s downtown has been a shadow of its former glory — its post war reputation as a boom-town now a distant memory.

But for Pastor Jones and other Richmond residents, there is a new opportunity to rebuild a prosperous and inclusive city for those who have long called the city home: the proposed UC Berkeley Global Campus at Richmond Bay.

Community activists and researchers at the Haas Institute for a Fair and Inclusive Society released a report Oct. 30 calling on UC Berkeley to partner with existing residents to support the community vision for the largest development project in the city since World War II.  The report, “Anchor Richmond: Community Opportunity & Anchor Strategies for the Berkeley Global Campus at Richmond Bay,” is the outcome of a yearlong research project that examined the opportunities and dangers of a new campus’ development.

“This is the largest development project since the shipyards. A lot of people would not benefit from this project, after living here their whole lives."

Community advocates, assembled at the Richmond Field Station for the report’s public release, urged the UC Berkeley administration to adopt environmentally and socially just policies in the areas of housing, education, community workforce and job opportunities, and business and wealth building.

“A lot of times, development projects come in and are not of benefit” to existing residents, said Pastor Craig Scott of the Unitarian Universalist Congregation of Berkeley. “We want to make sure it is of benefit to low-income and people of color.”

The potential for residents to become displaced through increased rental rates is one of the greatest concerns community members have about the proposed campus. “This is the largest development project since the shipyards,” said lifelong Richmond resident Melvin Willis, an organizer with ACCE, the Alliance of Californians for Community Empowerment. Over half of Richmond residents are renters. If displaced, the benefits of the new campus will do them no good. “A lot of people would not benefit from this project, after living here their whole lives,” Willis said.

Willis and advocates recommend that UC Berkeley invest in the creation of an affordable housing trust to protect low-income tenants. The report also recommends policies like rent control and renter protections and expanding the Homeownership Voucher Program to help Section 8 tenants move their payments toward homeownership.

Richmond is also home to many Black and Brown families with underwater mortgages. The city recently started an innovative approach to keep families in their homes with the use of eminent domain. The report encourages UC Berkeley to partner with the city to ensure families are not displaced.

Lorenzo Avila, an organizer with the Contra-Costa Interfaith Service Organization (CCISCO) said that the new campus could provide access to much needed jobs and change Richmond’s reputation. “We can change opinions about Richmond and bring nice opportunities for people,” Avila said. We want opportunity for jobs that don’t push people out.”

Tamisha Walker, co-founder of the Safe Return Project, echoed and expanded on Avila’s call for jobs. The mother of two, born and raised in Richmond, wants her children to have access to not only jobs but also to educational opportunities. With this project, the “community will be stabilized, can alleviate poverty, and reduce barriers.” She recommends targeted hiring of disadvantaged workers and a living wage policy. Educational collaborations would also increase opportunities for Richmond.

"We have growth in innovation, but a rise in inequality  [is] creating both economic and racialized inequality. There is [both] a need and an opportunity."

The Bay Area is a hub of innovation in an information economy, said Eli Moore, program manager at the Haas Institute who co-authored the report. While many in the region have gotten rich from this innovation, others still lack opportunities. “We have growth in innovation, but a rise in inequality [is] creating both economic and racialized inequality.”

UC, as a “cornerstone for innovation”, can creatively reduce inequality and encourage innovation by adopting “anchor strategies.” Anchor institutions are public and/or non-profit institutions that benefit communities through their compounding effects, such as providing jobs, and procurement opportunities for small businesses and cooperatives. Moore highlighted other University development projects and the policies and principles that made those beneficial to communities.

With Richmond’s high unemployment and numerous homeowners with underwater mortgages, the university can adopt policies that lift up the community. “There is a need and there is an opportunity,” Moore said.

The year-long research process included engaging hundreds of residents through meetings to hear their vision for the Richmond community.

"This helps us advance further. We've worked for so much progress. We're rising from our history of fear and despair. This is the vision that we have to implement."

Richmond Mayor Gayle McLaughlin and Vice-Mayor Jovanka Beckles also supported the report’s recommendations. “This helps us advance further,” McLaughlin said. “We’ve worked for so much progress. We’re rising from our history of fear and despair. This is the vision that we have to implement.”

Ruben Lizardo, director of local and government relations at UC Berkeley, said the university was committed to Richmond and partnering with the existing community and that it wants to move beyond confrontation to partnership. He said both the chancellor and the director of the Lawrence Berkeley National Laboratory signed a joint Statement of Commitment. However, after expected federal funding was lost, a new vision for a global campus in Richmond emerged.

“UC already has the land [and the] international scholars. We have the dirt, we have commitment,” Lizardo said, but we “need funds.” With continued declines of state funding, he said the UC will need advocacy partners to secure funding for the project.

The report “cannot be the end of the road,” said Pastor Donnell Jones. “We are in the beginning of a journey.” he said, for those who have long labored to maintain the “City of Pride and Purpose.” “We have faith in this collaboration and in this community,” he concluded. To increase trust, he called on the UC to adopt a “legally binding agreement” to benefit the community and echoed calls for collaboration and partnership.

The Haas Institute for a Fair and Inclusive Society is an independent research unit at UC Berkeley. Last year, the Haas Institute formed a collaborative partnership with local organizations: ACCE, CCISCO, and the Safe Return Project to analyze the proposed development and develop a model for community partnerships. Instead of a project that displaces residents, the project can be a new model for how institutions operate in community.

“The new campus in Richmond represents more than a development project,” Haas Institute Director john a. powell said in a statement. “It represents an opportunity to create a new platform for collaborative and sustainable engagement that is built in deep partnership with the community.”