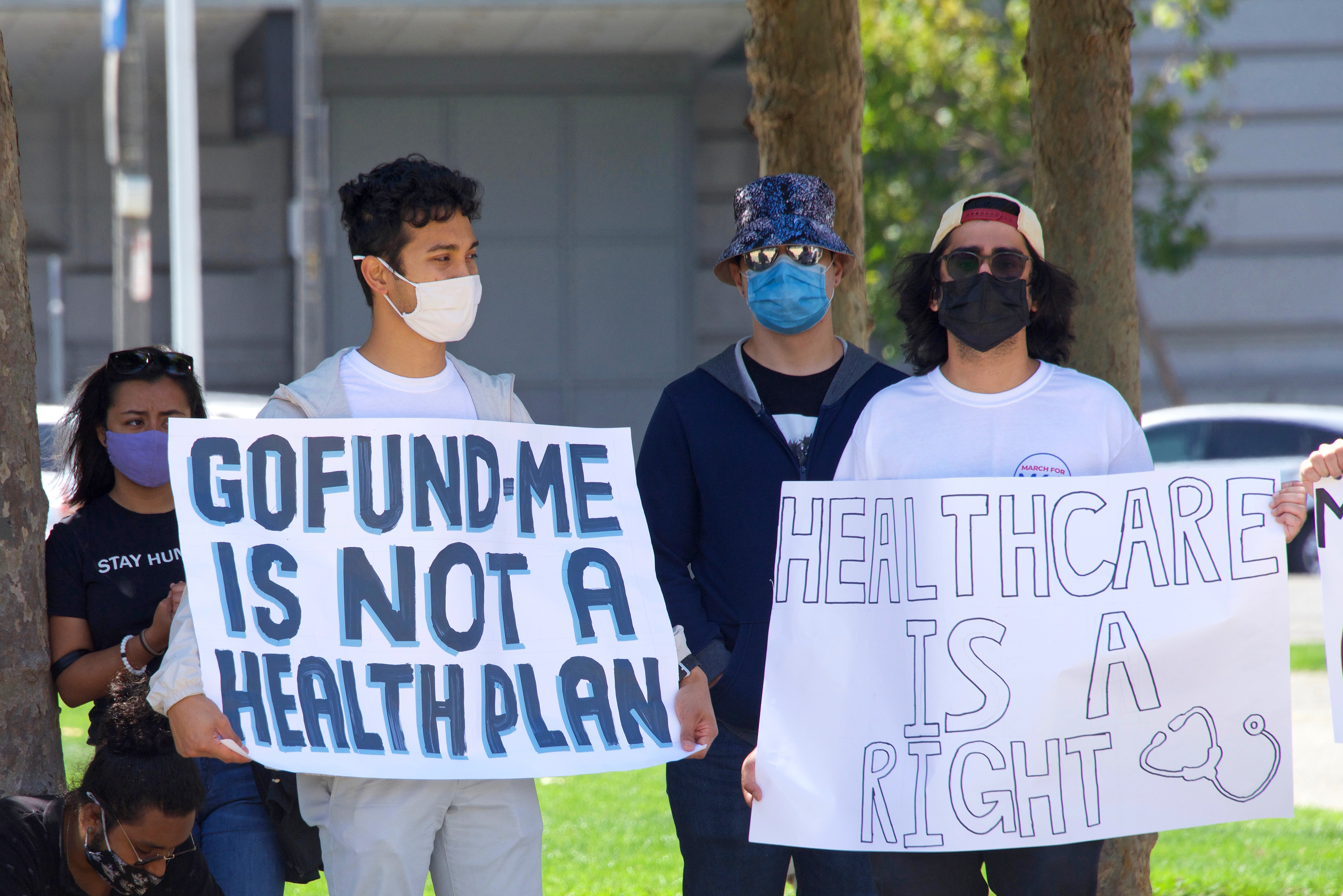 Where we live shouldn’t determine the length or the quality of our lives. We all belong in communities whose conditions allow us to live the healthiest lives possible. These conditions include stable housing, access to quality healthcare, jobs with living wages, and safe places to exercise and play.

Unfortunately, many communities face incessant barriers to health and the opportunity to be fully human. The Health in All Policies (HiAP) approach considers health in policies across various sectors to address the social and structural determinants that influence health outcomes.

To help California state agencies better understand what is causing social inequities in health and what they can do to address them, the California Strategic Growth Council (SGC) partnered with the Othering & Belonging Institute’s Community Power and Policy Partnerships (CP3) Program and Ground Works Consulting to lead an engagement process with local and regional stakeholders. The year-long project helped uncover various structural barriers to advancing health and racial equity, and these barriers were transformed into proposed strategic goals for the Task Force.

The SGC established the California HiAP Task Force in 2010 to “advance health, equity, and environmental sustainability” through facilitating collaborations between state agencies and supporting them to embed health and racial equity into programs and policies that advance state priorities. The HiAP Task Force worked with partner agencies, public health officials, and community leaders to develop their guiding framework, the Healthy Communities Framework.

The framework guided various activities, such as coordinating the formation of the California Farm-to-Fork Office, developing guidelines with the Department of General Services and Department of Corrections and Rehabilitation that improved the nutritional value of meals served in facilities across the state, and increasing park access, recreation opportunities, tree canopy, and open space in underserved communities through programs such as the Active Parks, Healthy People Pilot Program.

Stakeholder Engagement: Where Do We Go From Here?"

After completing its initial body of work and accomplishing early goals, the HiAP Task Force wanted to next identify the priority areas with the greatest needs for advancing health and equity. These priorities look different depending on regional context, which necessitated regional-level engagements.

“It was important to really ground truth, what folks were seeing and experiencing through their interactions with state government agencies, and understand how these dynamics connect to community outcomes at the local level,” explained Nicole Montojo, a researcher with the Othering & Belonging Institute’s CP3 Program.

To help bridge the state and local agencies, the stakeholder engagement process consisted of a state-wide survey and regional listening sessions. The survey and listening sessions provided great information and identified a key insight: health and equity stakeholders across California want to see a shift from focusing on social determinants of health towards a focus on socio-political determinants of health.

The relationships between state and local agencies, distribution of resources, and the administration of power are forces that shape social determinants of health. Participants’ recommendations reflected a call for the HiAP Task Force to reorient itself toward a broader mandate of advancing local power and partnerships with communities most impacted by health inequities.

The survey for state and local public agencies, as well as organizations and stakeholders who interface with them, was just one part of a broader process of community engagement, data analysis, and strategic planning. Using the Healthy Communities Framework as a guide, the survey aimed to:

In total, 128 responses were received, with the majority of the respondents’ organizations serving multiple populations who are disproportionately impacted by health inequities.

The survey found that the greatest priority elements of a healthy community among all respondents are housing, healthcare, employment, climate change, and safety. When responses from local and regional organizations are disaggregated by region (Bay Area, Central, Northern, Southern), the top five community elements described as high priority in all four regions were identified to be housing, healthcare, employment, food, and child development.

It also found the challenges and barriers to promoting health equity, with the most common themes being the categorical and siloed nature of funding, strict or restrictive funding criteria which prevent smaller nonprofits from benefiting from state funding, and fragmented systems which lead to a lack of transparency and communication between departments and agencies. 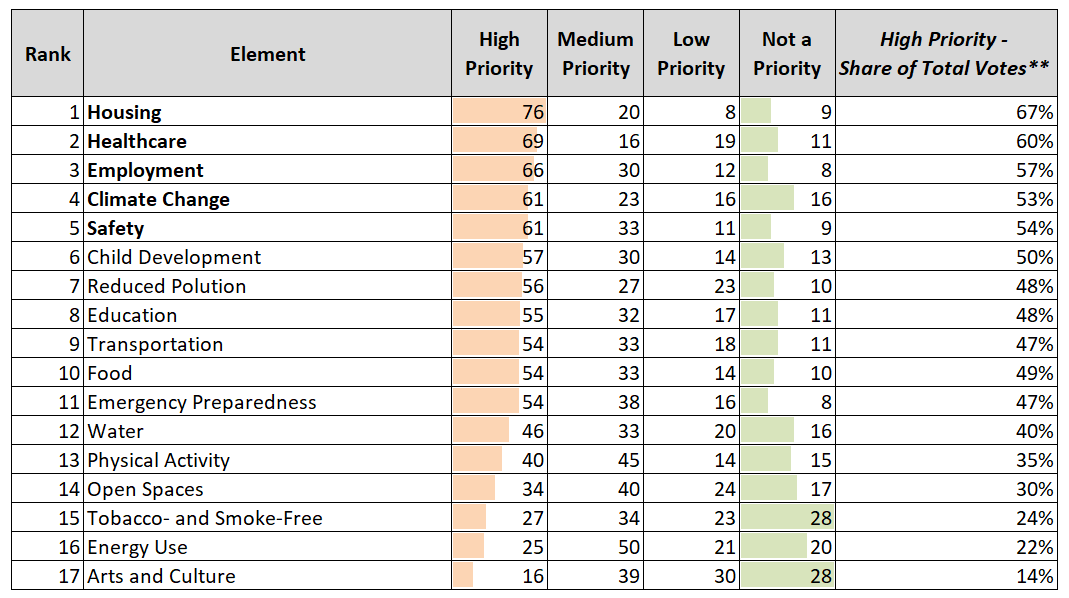 The listening sessions were designed to document nuanced input on health and equity needs and priorities at the community and local level. They were also meant to identify recommendations for HiAP priorities across the different regions in California―including specific recommendations for actions to eliminate institutional barriers to health equity.

With a focus on local and regional organizations, most participants represented organizations with local, county, or regional scopes. A total of 30 individuals participated in one of four sessions which revolved around four key areas: partnerships and communications; funding and direct support; research and data; and policy. Below are highlights from the recommendations that participants shared.

“Focus on building relationships with community power building and organizing groups to guide their decision-making, planning, priorities, and implementation. State HiAP has been very internal to government focus, and needs to really engage with the most impacted communities so that they can provide accountability, inside-outside strategy, advocacy for the policies when agencies are politically constrained, and to make the racial and health equity component of state HiAP more true and grounded.”

In regard to partnerships and communications, participants expressed the need for state agencies to provide direct communication channels and build authentic relationships  with local public agencies and community-based organizations. There was also an emphasis on engaging members of the most impacted communities who often don’t have a place at decision-making tables and don’t have existing relationships with state agencies. This input points to a priority for the Task Force to build authentic relationships and communication channels with local partners and establish deep local connections to support more intentional allocation of funding to organizations who are closest to impacted communities.

“Where there’s a lot of leeway is with implementation. There are a number of laws passed and signed, but for lack of funding, or maybe because agencies don’t believe in it, they’ll do whatever they can to not implement or implement poorly. That’s a challenge for advocates trying to achieve health and equity.”

Across all listening sessions, participants generally agreed with the priorities that rose to the top of the statewide survey (housing, healthcare, climate change). In addition to these policy areas, community safety and infrastructure were also lifted up as top priorities in more than one session. Building on relationships with communities and the power within communities, the HiAP Task Force could support locally developed policy solutions through capacity building, coordination, and inside-outside strategy as well as ensure follow through on implementation of key policy wins.

“Under existing grant structures, the rich get richer and the poor get poorer. Entities that have the ability to write and administer grants get awarded, while lower capacity organizations without grant writers get passed by.”

Reducing barriers to state funding is essential to supporting local capacity. Applying for and managing state grants can be overwhelming for smaller organizations operating without extensive administrative infrastructure, but these same organizations are often the ones who are most directly connected to or embedded within impacted communities, and thus best positioned to lead health equity work.

“So many health disparities get hidden in the data when it’s not disaggregated, especially for refugee communities.”

Data is especially important for tracking health disparities and clarifying how state resources and policy interventions should be targeted. Without it, communities cannot effectively advocate for themselves. Gaps in existing data sources need to be addressed in order for them to be useful when it comes to analyzing health disparities and evaluating the effectiveness of state health equity efforts.

The HiAP Task Force should know who is most impacted by health inequities, disaggregate data to ensure that impacted communities are not getting lost in aggregate numbers, and leverage partnerships to gather more nuanced forms of data (e.g., qualitative, community-level data).

Local organizations and agencies were looking for connections to bridge their work with state agencies. It’s important to reiterate that the motivation behind the HiAP Task Force is to help facilitate collaborations between sectors and supporting departments, because even at state-level agencies, it’s challenging to build bridges that facilitate a system that synchronously works to promote health and equity.

However, the work and mission of local organizations are greatly influenced by what’s happening on the state level, making it doubly important for the two to be aligned and in sync with each other.

What the stakeholder engagement process identified is local organizations’ desires to go beyond creating equitable access to the resources and economic opportunities people need in order to be healthier. This is certainly still important, but it’s also about the power and agency that people need to have in their own lives to get there.

As the Health in All Policies approach evolves, it is imperative to continue to gather data and feedback from communities that are most impacted by health inequities so that the HiAP Task Force may better develop goals that would align with those of organizations that are most directly connected to or embedded within impacted communities.