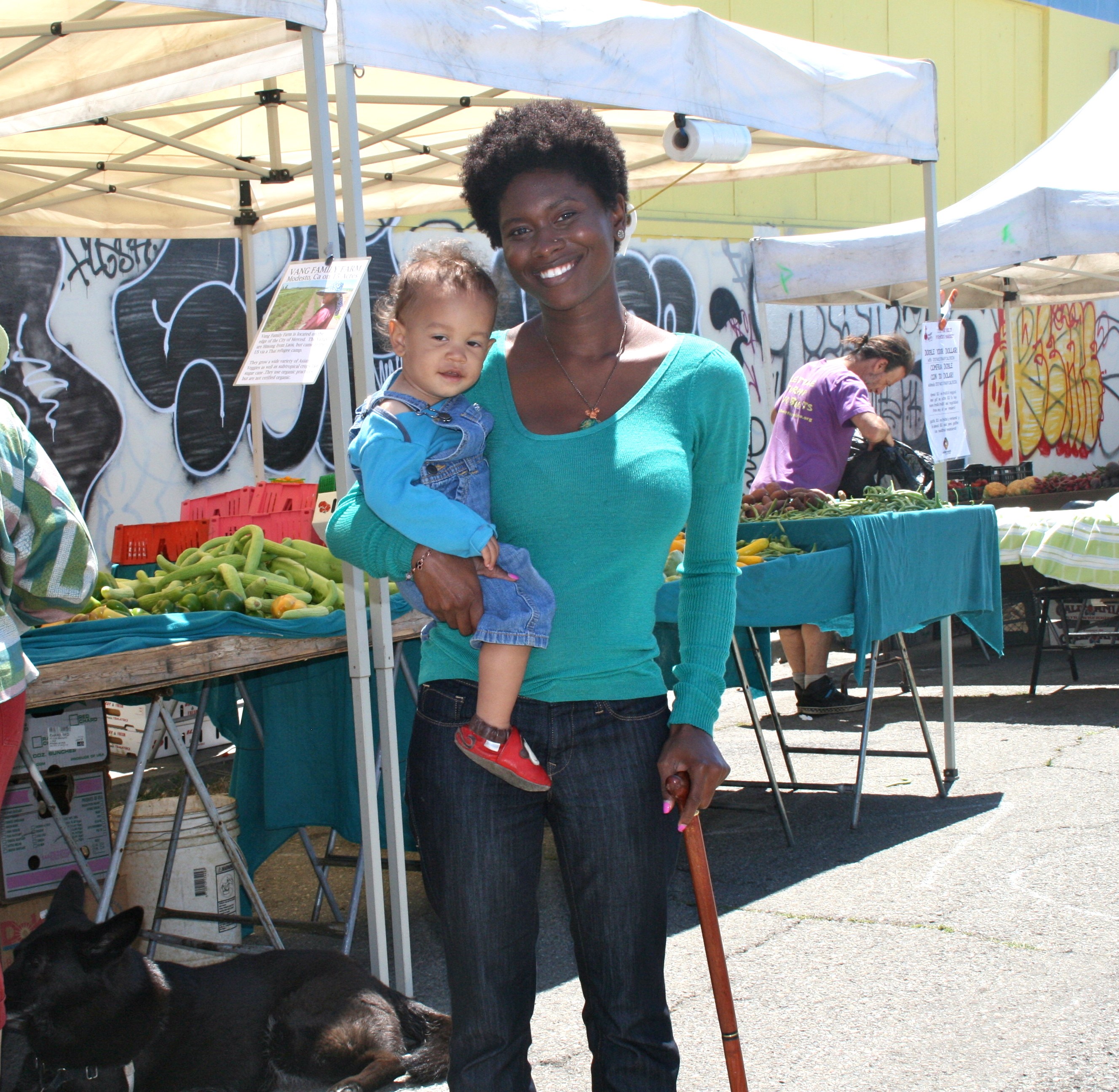 One Saturday, Natasha Simpson, a Disability Fellow at Phat Beets, hosted a workshop about why disability justice matters to food justice.

Simpson (pictured above with her son) is a graduate student at University of California, Davis. She has been researching disability and food for the past two years. Simpson became interested in disability justice and food justice in college through personal experience and began making connections to the systemic structures excluding marginalized groups.

The workshop began with the importance of shifting how society approaches disability. Our society currently views people with disabilities as burdens when they should be valued as members of the community. Their perspectives on and leadership in anti-oppression movements, including the food justice movement, should be sought out as valuable contributions to a more just, equitable world.

Simpson defined food justice as everyone’s right to afford and easily access culturally appropriate and nutritious food. Although some people can choose to buy local, organic foods, not everyone has the ability to access them. Though food justice advocates frequently observe that food insecurity disproportionately affects low-income people of color, advocacy around food justice for people with disabilities is not a prevalent part of the food justice discourse. It is important to note that these communities are not separate; a disabled person may also be a person of color and/or low income. To create an inclusive society, we must ask the following question: How can the food justice movement attain justice with society’s narrow view of health and how bodies should operate?

Throughout the workshop, Simpson elucidated the structures, barriers, and ways of thinking that exist in society that may exclude people with disabilities from joining the food justice movement. A capitalistic system contributes to structural exclusion because it allows corporations to strategically locate their retail establishments and products where they can earn the highest profits. This creates areas of food insecurity typically referred to as “food deserts,” which are areas that do not have easily accessible food stores and are disproportionately located in communities of color and low-income areas.

People living in these areas have to travel farther to obtain nutritious food, consequently making fast food an easier and more affordable option. A long trip to the grocery store or farmers market may not be practical or even possible for a person with disabilities. Once in the store, it can be difficult for a person with disabilities to maneuver through the grocery aisles and reach items if they use a wheelchair, walker, cane, or have an invisible disability such as chronic pain.

People with disabilities may also be vulnerable to reduced income and work hours. Therefore, they may not receive the benefits of a full time worker. A person with low income may not be able to include transportation fees and nutritious food, which is usually more expensive, in his or her budget. When a whole community of people is barred from the food justice movement, it exemplifies that eating healthy food is not driven by choice, but by society’s unjust structural framework. Unfortunately, even justice movements can fall prey to oppressive ideology.

Simpson talked about a 2013 U.S. Department of Agriculture-published article titled “Food Insecurity Among Households With Working-Age Adults With Disabilities.” The USDA took the data from the Current Population Survey Food Security Supplement (2009 and 2010) and used it in their report. Simpson is pleased research is being conducted relating to food insecurities and disabilities. However, she believes the data has some limitations. For instance, the article stated 38 percent of households with an adult with disabilities have food insecurity, yet it did not account for people who are over 65 years old and still working. Because there are likely people who are over 65 years old with disabilities who are still employed, Simpson suggests the percentage is most likely higher than the study claimed.

The study also did not have sustainable solutions to combat the issue of food insecurity among disabled people in the context of systemic ableism, such as issues of job discrimination. According to Simpson, “ableism is [defined as] the ideas and behaviors that bolster the belief that people with disabilities are inferior.” Legislative changes would be one of the ways to create transformative change so that disabled people could easily access nutritious food, but cultural change via disability justice advocacy is key.

According to Simpson, internalized oppression has caused marginalized communities to believe they should not speak up about experiences with disabilities and to consistently push their bodies beyond the limit. Simpson makes a historical connection to Harriet A. Washington's Medical Apartheid: The Dark History of Medical Experimentation on Black Americans from Colonial Times to the Present, in which the author illustrates how black slaves were suspected to be lying when they complained of injuries or illness.

Not identifying with disability and diminishing one’s bodily needs stems directly from historical and current experiences of oppression. Simpson sees the disability justice movement as one that acknowledges that history and gives her and other people of color with disabilities the opportunity to organize around their full lived experience.

Increasing food access will allow everyone to have sustainable food. “Exclusivity from the food justice movement mirrors the way society looks at disabilities,” Simpson said. “As disability and transformative justice activist Mia Mingus says, ‘We can’t be included in this system. We need to rebuild new ways of thinking and relating to each other.’” The food justice movement needs to be inclusive so that all people — including people with disabilities — can benefit and celebrate local, healthy, and nutritious food.