Why Cultures of Care? 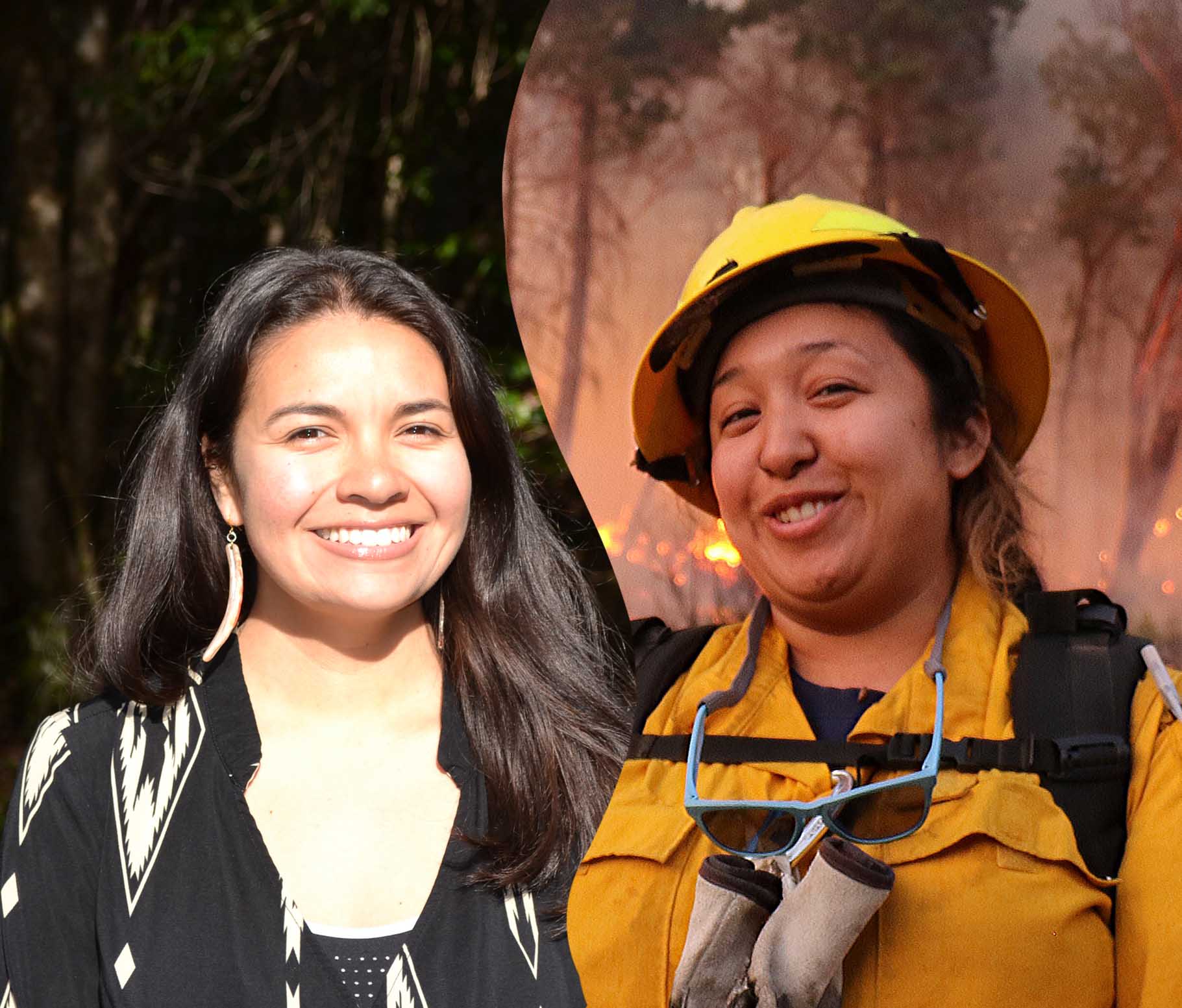 Why is Indigenous sovereignty essential to addressing the climate crisis? How can we restore human responsibilities and appropriate relationships with other species and ecosystems?

Watch our conversation with Analisa Tripp & Vikki Preston and read along below.

At the Karuk Department of Natural Resources, Analisa Tripp and Vikki Preston work to restore human responsibilities and appropriate relationships with species and ecosystem processes through place-based, Karuk ecological knowledge.

Vikki: I was raised to not take it for granted, because part of the reciprocity is to take care of it back also, so that it's there for you.

“The land takes care of us.”

1. Vikki reminds us that every place you go there are going to be people who are still from there, who know how to care for it. What historical, cultural, and social factors hinder us from engaging with this knowledge base? What is one thing can you do differently to honor and integrate Indigenous knowledge in the place you find yourself in?

Analisa: We evolved in this place. Since time immemorial this is where we lived and came to be, along with our plant and animal relatives that we share this place with, and so we just have an immense amount of love and care for just the places, the special places, but also the plants and animal relatives that we share it with, as well as one another.

And so we've been tending, caring, and loving for each other forever. So that's really great that we get to continue that work to this day, and ensuring that that can continue for generations to come, is a large part of why I do the work that I do for the Department of Natural Resources where we work. So it's not just about caring for natural resources, it's about restoring that large cultural landscape. That 1.3 million acres that I talked about being our ancestral territory. It's not like the Klamath National Forest or Six Rivers National Forest, it's just Karuk land.

Vikki: Someone made a comment the other day, working with a non-Indigenous person on some of our projects, and they were like, "Wow, y'all really have this huge attention to detail!"

All this knowledge is been a long time in the making and I think that it's good to really try and thoroughly apply it and really learn a lot from it. Like we're definitely picking up something that's been put down since time immemorial. So I think that's part of our survival, too.

Analisa: Every place you go, there are gonna be people who are from there, I think, who still care for it. On a global level, I think it's gonna take each place working with their own Indigenous people and just traditional ecological knowledge and making changes on a local level that's gonna make a global impact.

The Land Cares for Us,
We Care for the Land

1. Ani and Vikki speak about a culture of sharing resources that is familiar to them—it is cultural for them. Unfortunately, we live among many examples of operating in this world that restrict a culture of care and reciprocity with land, people, plants, and animals. Thinking locally and for yourself, what have you learned that keeps you from operating this way (even if you are operating with care and reciprocity in many ways)? Where did you learn this from? How would you have taught your younger self to operate differently?

Analisa: So much of our culture, religion, and health and wellbeing in general relies so heavily on the land that we live on, and the natural resources that we have access to. Physical, mental, and spiritual wellbeing all are so intertwined in the health of our forests and our species.

It's really exciting to see places you've done work on, through prescribed fire or anything else. To continue to go and see changes is just really exciting, and especially seeing changes in the kids that we get to work with and kinda see them gain confidence in their skills and knowledge that they already hold, and then learning new things to add to that.

Vikki: When we've been able to go back to places pretty continuously for years, not just maybe once, and to see kind of the changes. I think those are kinda ways that I feel like you can actually tangibly also see them, like plants species for example, flourish.

If there's only one, you won't wanna take it; but if there's more than one, then you can gather there. If it's like a whole bunch, then you and your family, or whoever else could possibly gather there. So that's what you look for and that's how you know that it's not somewhere where just you could go; it's some place that your family could go or your whole community could go.

And I think that that's important to recognize the impacts that you have on what is able to be shared amongst other folks, and that kinda spreads it out. How it is not just one plant able to care for you, but maybe multiple plants that care for the whole community of people. It's not something where I'm just out looking for one thing for just me. I'm usually always going and being like, I'm not gonna be out here alone. I'm gonna be here with other people. We're not gonna give up that sense of caring for the land just to do something else. So I think that it's not something that we can compromise on. We have so much that we can't compromise on as cultural Karuk people.

1. Why does Ani suggest “land back” as a fundamental step in combating climate change? Draw that connection for someone who is having a hard time seeing that correlation.
2. Can you think of an example where the language used contains important information about the place, history, or origins of something?

Analisa: I think one of the things that I would say to anyone who wondered what would be one step to help combat climate change, I would say “land back.” It's really uncertain what it's gonna look like in the future, but it is pretty certain that it's not gonna look the same ever again probably, and that's just a really scary reality that is just the result of Karuk people not being able to manage their landscape the way that we always have traditionally.

I mean for one thing, this country is very young, especially in this area. Contact was very late. But in other places too, even when contact was very early — I'm talking about European contact on this continent anyway.

These people, our people, and other Indigenous peoples have been living in their places forever — thousands and thousands of years, at the very least — and we've evolved together. So we know how to take care of our places and that can be said globally as well, for people Indigenous to all the places globally. And that's been so disrupted.

Part of what makes our work so special is the integration of traditional ecological knowledge and just the involvement of Karuk people at all levels of the planning processes of what we're doing. One thing that's been pretty cool in the recent project that we're working on is just trying to integrate as much as we can Karuk language, and specifically Karuk place names, because each place name carries a lot of meaning behind it and also kind of an insight into what the place looked like at that time or what it, in some cases, still looks like to this day. But in the other cases based on the level of impact from mining or logging — or any of these other extractive and destructive industries that have impacted our territory — might have changed those [lands]. But it gives us a hint as to what we should try and restore it to, which has been really great.

In order to have cultural sovereignty we have to take care of those things. In order to continue to have these things as a part of our lives and the lives of our children in generations to come. And we're just building upon the work of generations that before us too. We wouldn't be where we are today without the tireless work of our parents and grandparents, and before that, generations and generations of people, since time immemorial.

We were just federally recognized in 1979, which is very recent. And before that, we were just still here, doing what we've always been doing. We are kind of a 'landless,' reservationless tribe, and so the work that we do for our land isn't because we own it or necessarily going to be reaping the full benefits. I mean we are though, that's why we're doing it, is to protect and restore and enhance for the future and for our people today, who still use and live on this land. But we don't have hunting rights or fishing rights, for example, but we still continue to work tirelessly to undam our rivers and help our fish populations that are endangered or threatened. So yeah, it's all intertwined.

1. Vikki states that Karuk Ecological Knowledge is not based in Capitalism and tethered to profit in that way. How does Capitalism effect which stories get retold or what knowledge is transferred generation to generation? What is at stake if these stories and knowledge do not live on (recognizing that so much already has not)?

Vikki: Some of the first places that you receive teachings from is from traditional stories and we've been telling them pretty much since the beginning. We're still living in these places, we're still living with these specific plants or animals, and I think that means that these lessons are still remaining true. And how do we kind of adapt them to how we're living now?

I think it's important for the youth, and just as we're growing up to reread and reevaluate those stories, and kind of like why they've been perpetuated, and why we retell them.

Analisa: I'll say that fire is just one tool; I mean it's a very impactful tool, and a very timely tool, given that we are living in a time where our forests are so overforested and also in a very extended drought period right now too. But yeah, I think that more importantly, is the return of our people to our places and being able to have agency over how our territory is managed for and cared for.