Widening the Lens on Voter Suppression

MUCH OF THE INTRIGUE around recent studies of voter suppression laws has centered on how many votes a new law prevented from being cast, and whether it was enough to swing the election. From a voting-rights perspective, these are not the questions that should orient our work. Rather, when we view the effective exercise of the franchise as a universal right, we must at a minimum oppose all restrictions that place an undue or discriminatory burden on any voters—no matter who, or how many, they are.

This section quickly reviews evidence that recent voting restrictions enacted across the country are unnecessary, discriminatory, and motivated by partisan interests. Knowing this is enough to know why voting-rights advocates should oppose these laws. I stress this at the outset in hopes that the subsequent section—which is critical of recent models for quantifying voter suppression—will not be misread as defending the laws. Rather, it is that opposition to—and investments in countering—voter suppression laws should not be contingent upon whether they change the outcomes of elections. Were we to fall into that framing of the problem, voting rights would already have lost.

Proposals to curtail early voting, require photo identification to vote, or otherwise change how voters establish their identities at the polls are usually presented as efforts to prevent voter fraud. The problem with this rationale is that there is no evidence that such fraud poses any threat to US elections. A White House official’s sworn declaration in January 2018 that the Trump administration’s voter-fraud commission had no findings to disclose (upon its disbandment) is only the latest sign that voting restrictions address no legitimate need.5 In fact, there is broad agreement among researchers and legal experts that the phenomenon these laws ostensibly combat is practically non-existent.6 New voting restrictions merit the name “voter suppression laws” because the votes they stifle are those of eligible citizens.

Researchers also regularly find that the obstacles voter suppression laws put in place impinge upon certain voter subgroups more than others. For example, a law adopted in Texas in 2014 was shown to have limited the accepted forms of voter ID in ways that disproportionately affected Black and Latino eligible voters relative to whites.7 A 2017 analysis of Alabama’s voter ID law found that the same was true of it.8 In Ohio, a 2014 voting reform jettisoned the state’s “Golden Week”— in which citizens can register and cast early votes on the same day—despite research finding that African Americans utilized the week at far higher rates than whites.9 More broadly, laws mandating that voters present photo IDs that are unexpired or contain current addresses are greater obstacles for the poor, the underemployed, and the young—all disproportionately people of color.

Finally, there is every reason to believe that voter suppression laws are designed with the goal of securing partisan advantage. Numerous researchers have noted that the pattern of new voting regulations adopted in state legislatures demonstrates that Republicans alone champion the laws.10 Indeed, 12 of the 13 states with new voting restrictions in 2016 entered the year with Republican state government “trifectas”—GOP control of both legislative houses and the governorship (see Figure 1). Some of these GOP-led legislatures moved on the laws only once the Supreme Court made the federal government unable to enforce pre-approval regulations on state voting reforms. Next, all efforts to turn up evidence of widespread voter fraud have failed. Meanwhile, research has consistently found that new voting restrictions are more likely to burden economically or otherwise structurally disadvantaged groups—groups widely considered to “lean Democrat.” Such an alignment of partisan legislative action with foreseeable partisan advantage is hard to imagine as purely serendipitous—innocent of intent. 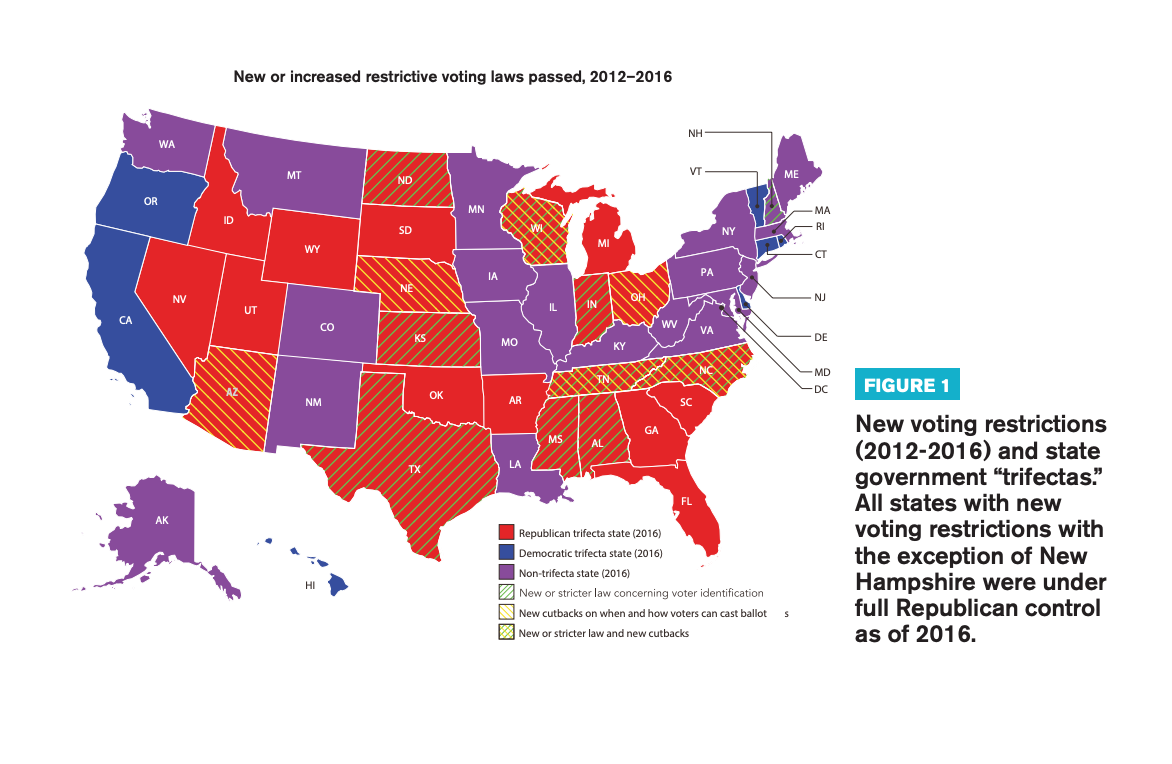 For the most hardened skeptics of proof of intent, where voter suppression is concerned, we can also point to some smoking guns. In Wisconsin, a sworn statement by a Republican staffer attests that GOP state senators in a closed-door meeting were eager and “giddy” to pass that state’s voter ID law to give them a leg up in elections.11 In North Carolina, e-mail correspondence from the state’s Republican Party director reveals that he instructed county elections boards to curtail early voting to target certain voter subgroups—what he himself called “mak[ing] party line changes.”12 It is also in North Carolina that a strict voter ID law was struck down by a federal appeals court that found that its creators had consulted race-disaggregated data on who in the state possessed which forms of ID. According to the court’s decision, the eventual Republican law “target[ed] African Americans with almost surgical precision.”13 And these are only some recent examples.14

This is the voting-rights argument against the recent spate of restrictive voting laws. They serve no legitimate purpose, while placing burdens on eligible voters that are borne by some subgroups more than others. Opposition to these laws should in no way be a partisan issue. Unfortunately however, they have been made one by a selection of politicians who see electoral advantage in making it harder for some citizens to vote.