Widening the Lens on Voter Suppression

THIS BRIEF HAS proceeded by way of three steps. It began by arguing that the case against new restrictive voting laws lies not in the number of votes they suppress, but the facts that they address no legitimate need, impose burdens discriminatorily, and arise from partisan interests. I showed that these facts are well established by research and reportage including, but also predating, the recent round of post-2016 studies.

Next, the brief turned to those studies, reviewing their findings on voter suppression laws’ impacts, and the debates those findings have sparked. It highlighted the various methodological challenges to isolating restrictive voting laws’ independent suppressive effect—challenges that arise from the laws’ entanglement with, and reliance upon, other subtler exclusionary structures, both formal and informal.

Finally, I argued that these challenges—headaches for quantitative researchers—can and should be cultivated for their lessons on fighting voter suppression. Those lessons start with a broadening of the framing of what count as “voting-rights issues,” by way of the recognition that voter suppression has multiple causes or responsibilities. This recognition opens up our understanding of the factors suppressing the vote, bringing into view as co-causes that which has until now been considered mere context. From these multiple causes spring entry points for multiple modes of intervention—and solutions.

Figure 3 illustrates the proposal. On the top is a conventional framing of the problem of voter suppression. In the illustration, the laws are an encompassing and unbroken barrier—determinate for an unknown number of voters. It is notable that other factors do not go wholly unacknowledged here. But they are imagined like clouds or a fog, traversing the boundary between those who are and are not affected by the laws, and essentially incidental to them. If anything, these factors are a nuisance in that they obstruct the view of restrictive laws’ causal impact, and the people being constrained by it. 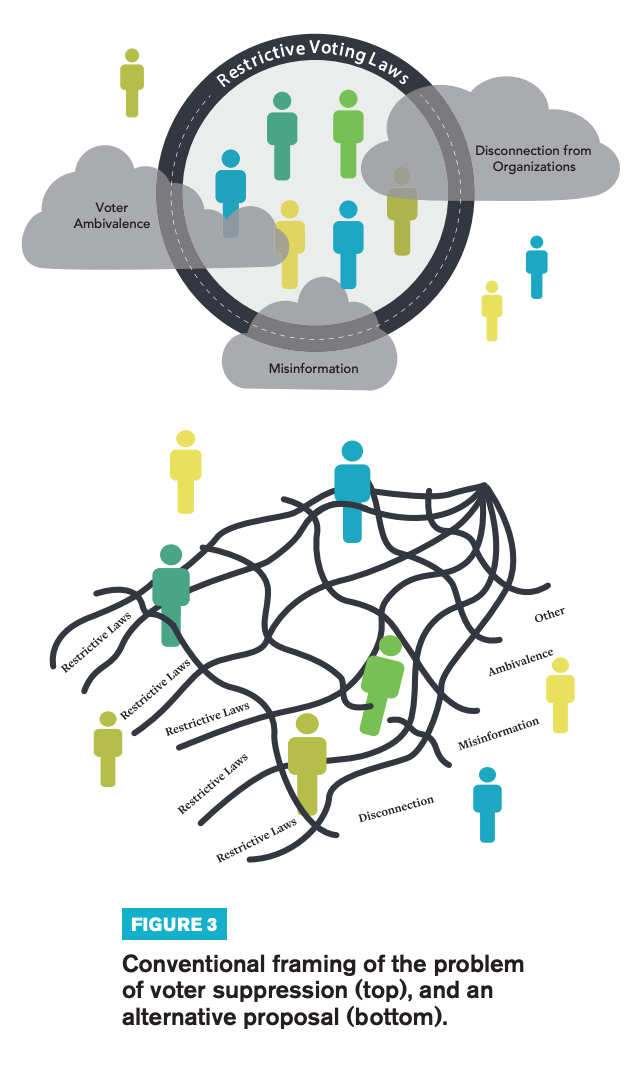 The bottom graphic on Figure 3 is a depiction of my proposal for replacing this framing. It represents voter suppression as a net woven of interlocking strands. Not a perfect mesh, the distances between parallel strands vary, making for larger and smaller openings through which voters might pass or get ensnared. The strands’ intersections are clearly the most perilous terrain, and yet still no part of the net is determinate—one can conceivably fight through it. But what is more important for our purposes is that a net can be snipped in many places, and from many angles. And, as with any net, here each strand is dependent on the others for its strength, and thus snipping any one weakens the entire structure.

At present, most of the energy and resources expended in the name of tackling voter suppression continues to go toward fighting restrictive laws in the courts. This is important—indeed crucial— work. But it should not overshadow the essential voting-rights role of a variety of other kinds of initiatives as well. I conclude here with a few that stand out based on the previous sections’ analysis. Just as the “strands” in Figure 3 above do not represent all of voter suppression’s causes, nor is the following meant to be an exhaustive list of possible modes of intervention.

Comprehensive voter education. When surveys reveal that most of those who did not vote because of an ID law actually possessed acceptable ID, clearly misinformation is a serious problem. Educating voters on new voting laws should be the responsibility of the state governments that pass the laws. Where they show little inclination to do so, civic organizations should make demands at both the state and local level for robust and equitable public education campaigns.

But the kind of voter education needed to overcome voter suppression also goes well beyond informing citizens about the content of new restrictions. First, such initiatives must be targeted and tailored to the voter groups that these laws affect. Among other things, this will involve their being delivered in linguistically and culturally appropriate ways. Second, for voter education to counter the formidable forces suppressing the vote, it must not only convey information but also equip individuals and communities to be effective civic advocates.49 We have learned two important lessons about “wins” in the courts: First, they are usually only partial; and second, voting rights can still “lose on the ground.” As Michael Wines has reported for the New York Times, the reasons include such factors as “foot-dragging by states, confusion among voters, [and] the inability of judges to completely roll back bias.”50 When state administrators fail to comply with or implement the decisions of the courts51—or even the letter of the restrictive laws themselves—knowledgeable and strong citizen advocacy is the needed next step to turn back laws’ suppressive effects. Community-based organizations are the best vehicle for this type of comprehensive voter education.

Civic-engagement and outreach infrastructure. As my analysis of recent research above noted, social, economic, and civic exclusion and disconnection are partners to restrictive laws in the work of suppressing votes. One way to sever the ties of these co-causes is by bolstering organizations that conduct outreach with the young, the poor, and other constituencies with limited contact with civic networks and resources. This will include many who are mistrustful of institutions, for whom outreach will no doubt require innovative tactics and perhaps new technologies. The goal however should be to create and sustain connections and belonging in a community of voters. Many organizations already do this kind of work; yet it has not been widely appreciated as fundamental to voting rights.

Given adequate resources and capacity, these organizations can also serve as community-level sites for receiving and collating reports of misconduct and anomalies at the polls. The need for such a presence is evident when we consider an article like Berman’s. Why does it take nearly a year—and a uniquely committed voting-rights reporter—to bring forth the stories of voters disenfranchised in a US presidential election? If the problem is that most media are disinclined to cover voter suppression, what would make such negligence impossible? One answer is to build local infrastructure for eliciting, aggregating, and publicizing people’s stories. Crucially, this is but another capacity for the same civic-engagement institutions and networks that double as forces for preventing voter suppression in the first place. Where they are not able to help voters through the “net,” their work to amplify disenfranchised voters’ stories seems preferable to coverage of quantitative studies. This is, again, because the latter tend to become consumed by technical debates over methodology, and by partisan ones about whether or not a voting law swung the election, rather than staying focused on voters’ rights.

When we strengthen efforts to activate and empower voters, we fight voter suppression by building knowledge, resilience, and advocacy capacity.

Grounded in our commitment to effective voting rights, and in a body of empirical research, the Haas Institute sees the problem of voter suppression as requiring a multi-pronged and holistic approach.

Voter empowerment and activation. A related but distinct factor that works in concert with restrictive voting laws to suppress the vote is voter ambivalence. By ambivalence, I mean to refer to various levels of doubt about whether one’s vote matters, the legitimacy of the electoral process, and whether any candidate represents one’s interests or community, among others. Such doubts of course transcend voter subgroup. But they are a particularly logical response for those who are rarely courted by electoral campaigns due to being habitually characterized as unreliable or “low-propensity” voters. That such characterizations are perceived by—and disempowering of—their subjects is borne out by the limited research exploring non-voters’ reasons for sitting out the 2016 election.52 The effects are strongest on precisely those groups targeted by restrictive voting laws.53 Nonetheless, those shaping mainstream conversations on voter suppression rarely permit that voter ambivalence be considered within the issue’s ambit.

This omission is wrongheaded. The voter who is ambivalent is much more likely to be disenfranchised by new voting laws than is the voter who is determined and certain her vote matters. Principled voting-rights advocates should not be in the business of writing off the former—of saying that she didn’t try hard enough or probably wouldn’t have voted anyway. Of course, to a large extent it is the responsibility of campaigns and candidates to inspire a sense of commitment and determination to vote. Still, strong community and political organizations on the ground are best positioned to address voter ambivalence and restrictive laws in a sustained manner that builds constituency power and transcends individual candidates or election cycles.

Citizen advocacy around election administration. The three strategic entry points above are derived directly from my analysis of recent studies of restrictive voting laws and challenges to calculating their impact. As I have explained, the debates surrounding those studies draw attention to these entry points as promising immediate, affirmative modes of intervention that are not conventionally understood in voting-rights terms.

But there are also several additional institutional structures that are not captured here, but that work in concert with restrictive voting laws to dissuade certain constituencies from voting. Many policies and protocols for administering elections rest on decisions made at the discretion of city, county, and state officials.54 These may include matters such as registration deadlines; the timing and scheduling of early voting; the hours, locations, and staffing of polling places; and much more, depending on the state. These matters are anything but trivial to voters, and—especially when set in tandem with new voting restrictions—can have significant effects on who ultimately casts ballots.

Those who wish to fight voter suppression should thus support citizen advocacy around the administration of elections. Here I refer to constituent-driven demands aimed below the level of legislative action—demands whose content will vary depending on the particular needs of the electorate in a given jurisdiction. Not incidentally, each of the strategic modes of intervention listed above also builds constituencies’ capacity to formulate, target, and organize campaigns around such demands.

Organizations committed to voting rights should be supported in work to assess local constituents’ voting-access needs—as they relate, for example, to differences of age, ability, and identity. Subsequent advocacy will then be equipped to apply pressure and to promote inclusive reforms enabling everyone to reach the universal goal of effective enjoyment of the right to vote.55

The Haas Institute sees all political power-building at the community level, especially with young people and communities of color, as voting-rights work. When we strengthen efforts to activate and empower voters, we fight voter suppression by building knowledge, resilience, and advocacy capacity. Investing in these capacities among groups disproportionately targeted by restrictive laws also fuels a virtuous pro-voting rights cycle: Once empowered, the groups will become constituencies capable of holding lawmakers accountable to high standards of inclusiveness in future laws and policies related to voting and registration.

Grounded then in our commitment to the universal enjoyment of effective voting rights, and in a body of empirical research, the Haas Institute sees the problem of voter suppression as requiring a multipronged and holistic approach. By pursuing it, we will not only be removing barriers—working from a defensive or rearguard position. We will be building capacity, infrastructure, and structures that affirm and advance the voting rights of everyone— structures for an inclusive electorate.