THE BAY AREA, and California more broadly, is experiencing a housing crisis that is driven in part by a shortage of housing units affordable to moderate income, low income, and very low income households. According to the California Department of Housing and Community Development (HCD), 180,000 housing units need to be built each year until 2025 to meet statewide demand; by comparison, between 2005 and 2015 the state produced an average of 80,000 housing units annually.1

The development of new housing in the Bay Area has been dominated by production of units for wealthier residents, with the region producing 99% of the housing needed for Above Moderate income households, and less than a third of the housing needed for Very Low, Low and Moderate income households between 2007-2014. The constrained supply and increasing demand for housing has contributed to the current situation in which 31% of all Bay Area households are over-burdened by housing costs. The crisis most acutely affects the lowest income groups; for instance, more than half of the households earning $20,000-$35,000 annually (around minimum wage) are spending more than half their income on housing.2 This reality has a disproportionate impact on communities of color because of the historical barriers to affordable credit (and as a consequence, homeownership markets) and other pathways to housing.3 Rising housing costs have been linked to exacerbating segregation in recent years, as families of color are displaced to the outskirts of high-cost regions in order to find affordable housing.4 To shed light on how this crisis came to be despite state statutes that purport to ensure adequate housing growth, this report seeks to identify some of the bottlenecks in the regional housing planning process in the Bay Area, and to illuminate how the planning processes required by state law must be improved to promote racial equity and housing affordability. This report additionally highlights how some jurisdictions have shirked their responsibilities to promote adequate housing development. The analysis points to the need for improved accountability toward jurisdictions’ housing responsibilities and an improved method for distributing the responsibility of housing production.

The housing crisis most acutely affects the lowest income groups—more than half of the households earning $20,000-$35,000 annually (around minimum wage) are spending more than half their income on housing.

The California Housing Element law, passed in 1967, requires that each jurisdiction in the state adequately plan for existing and projected housing needs by identifying land where housing can realistically be constructed and by permitting a sufficient number of units. This requirement was established in an attempt to ensure that all Californians have access to housing they can afford in the areas where they live and work. Local governments are not, however, allowed to determine for themselves how much housing is “sufficient”; they must follow a process that involves the regional councils of governments (COGs), and state agencies. The process begins with the California Department of Finance calculating the future population growth and housing needed for each region in the state. The COG in each region then determines how much housing is needed in each city for each income category, and publishes this information in the form of Regional Housing Needs Allocation (RHNA). For the San Francisco Bay Area, the COG is the Association of Bay Area Governments/Metropolitan Transportation Commission (ABAG/MTC). Each local government in the region receives its housing “Allocation” and is, in turn, required to zone land so as to accommodate its portion of the region’s housing need. Each local government must identify sites that are considered suitable for housing development, report this information to the state, and issue the quantity of housing permits that matches their respective RHNA. This process is illustrated in Chart 1, below.

The process has been criticized at length because there are limited mechanisms to ensure that cities identify parcels that are actually realistic for housing development, and because there are no penalties issued to jurisdictions that issue insufficient numbers of housing permits.5 The lack of accountability in concert with local politics means minimal compliance in meeting housing goals. Lack of accountability of local jurisdictions is thus a contributor to the present housmethodology for determining allocations does not allocate enough housing to white, affluent jurisdictions that are opposed to affordable housing development, in effect giving these jurisdictions a “pass.” We analyzed how the RHNAs for the nine-county Bay Area and found that the local governments with higher percentage of white residents were allocated lower numbers of moderate and lower income housing during the 3rd and 5th RHNA Cycles, which respectively span the years 1999-2006 and 2014-2023.

Like every other region statewide, the Bay Area has ing crisis: while California’s population has grown dramatically in recent decades, housing supply has consistently lagged behind need—particularly for very low income, low income, and moderate income housing units. 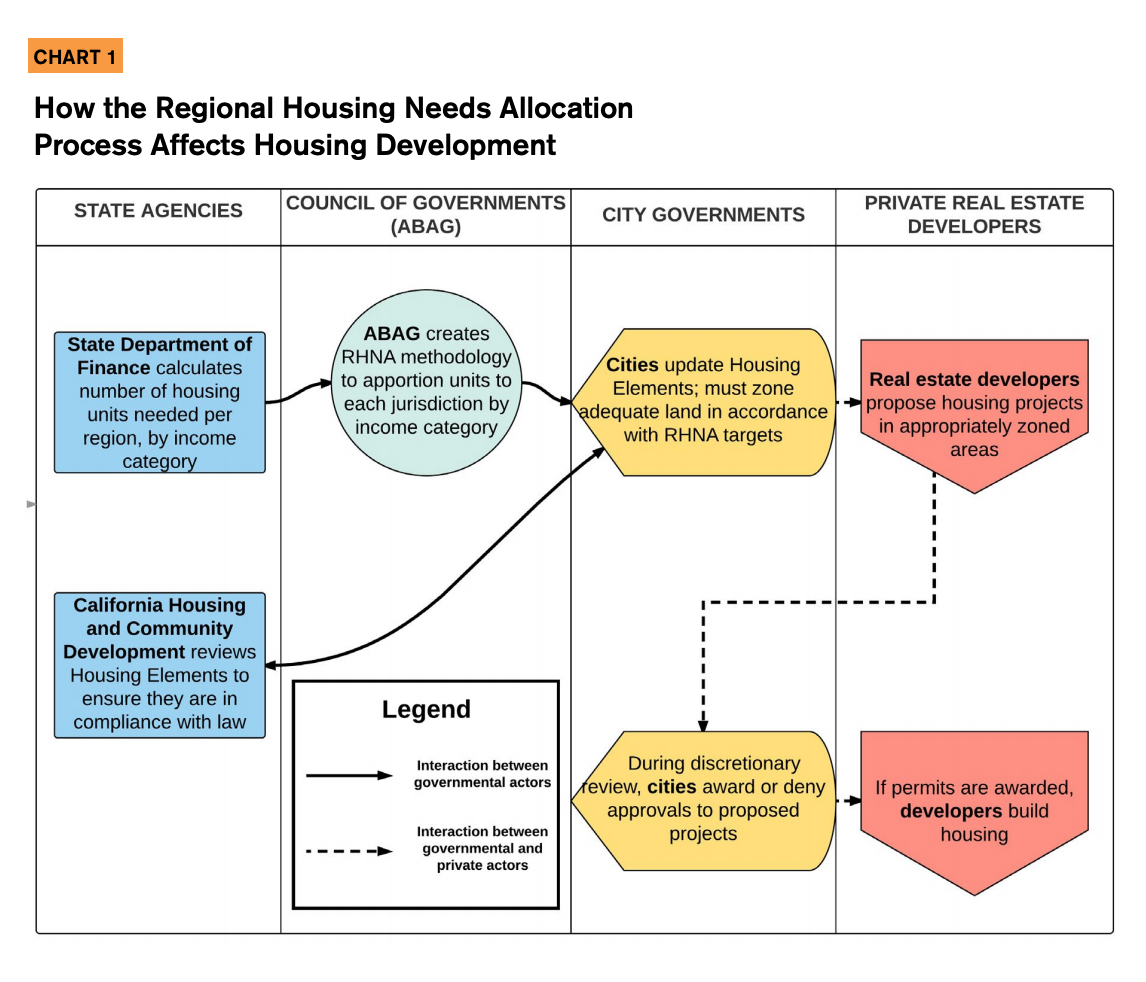 The California Community Partnerships team at the Haas Institute for a Fair and Inclusive Society affirms these existing critiques, but in this report raises an additional concern with RHNA in the Bay Area: the failed to permit enough units to meet housing demand. However, even if enforcement were tightened and Bay Area cities received greater incentives to permit additional housing, there will continue to be racially inequitable outcomes unless the Bay Area’s COG, the Association of Bay Area Governments/ Metropolitan Transit Commission (ABAG/MTC), takes steps to modify its RHNA methodology to affirmatively promote Fair Housing and desegregation, as required by the 1968 federal Fair Housing Act. Chart 2 below indicates how each stage of the RHNA process, at all levels of government, contains flaws and indicates why the current problem cannot be solved by enhancing enforcement on permitting alone. 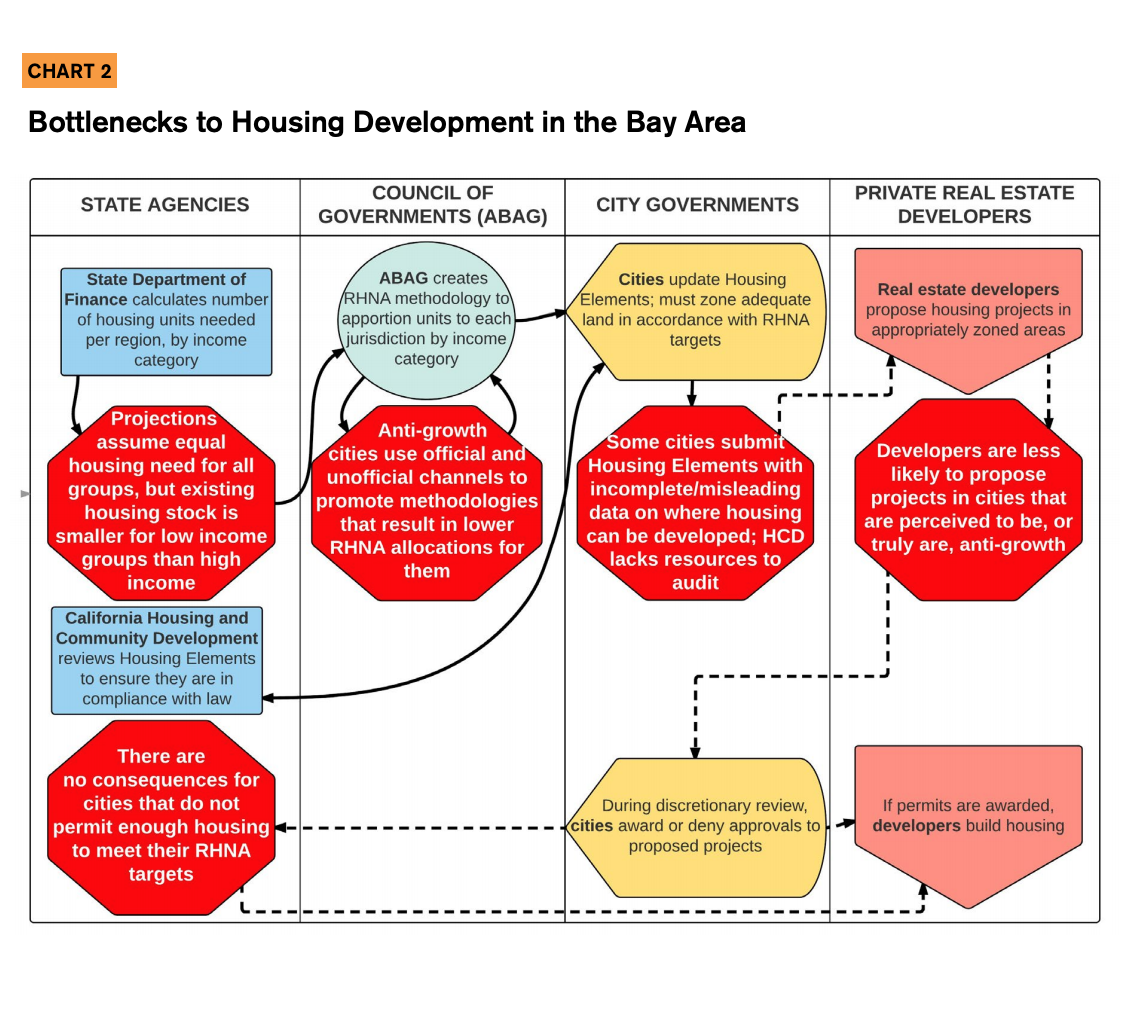 In the first section of this report, we show how the number of units allocated—the goals set for how much housing each city or town should develop - varies among cities with similar population sizes but different demographic breakdowns. There are clear relationships between the number of units allocated, adjusted for population size of each city, and the racial composition of cities. In the second section we demonstrate the findings on the pervasiveness of under-permitting in the Bay Area during 1999- 2014 (the 3rd and 4th RHNA cycles). Finally, in the last section of this report we discuss some potential solutions that could help to eliminate the racial disparity in housing allocations while still meeting the region’s goals under SB 375.6 ABAG/MTC must address the racial disparities in subsequent RHNA cycles and when creating regional plans, including Plan Bay Area 2040, in order to comply with federal and state law and promote racial equity in the Bay Area region. We argue that instead of focusing exclusively on developing housing in priority development areas (PDAs), that ABAG/MTC should also prioritize housing in Transit Priority Project zones (TPPs) and in areas where there is a demonstrated lack of low income housing relative to the size of the low income workforce, in addition to prioritizing housing in PDAs.