THE HOUSING ALLOCATION PROCESS in the Bay Area begins with ABAG/MTC developing a methodology to determine how many units each local government should develop for four categories of household income. This methodology is determined prior to each eight-year RHNA cycle. Chart 3 shows the number of housing units within each income category that the State Department of Finance determined the region needed between 2015 and 2023.

Our analysis of the Regional Housing Needs Allocations methodology tested whether there were correlations between the cities’ median household incomes, cities’ racial compositions, and the number of units that were allocated to each city. It is worth noting that statutorily, councils of governments are required to consider ten different factors, but there is no explicit mandate to prevent racially disparate impacts. Out of six possible methodologies that ABAG/MTC considered during the planning period of 2015-2023 (the 5th RHNA cycle), ABAG/MTC opted for the “equity scenario” that was anticipated to promote socioeconomic equity to a larger degree than other scenarios.

Our exploration into the racial and income dynamics of RHNAs was sparked by city planning research on exclusionary zoning. Exclusionary zoning refers to city practices that sharply regulate land uses and building codes, such as imposing stringent density restrictions, which have the effect of making housing more expensive. This results in restricting the number of low income residents and people of color who can afford to live within those jurisdictions. Exclusive zoning in the Bay Area and the rest of the United States has a long history, but in recent decades has been less explicit, expressed as a desire of homeowners to maintain or increase their property values and institutionalized through regulations that indirectly inhibit development of housing benefiting low income, homeless, reentry, and other marginalized communities.10

One way cities attempt to avoid affordable housing is to advocate for housing allocation methodologies which reduce the number of units that their jurisdictions are expected to produce. They additionally can opt not to designate areas of their jurisdictions as “Priority Development Areas.” Priority Development Areas (PDAs) are used to designate areas near transit stations where new housing development is to be concentrated according to the regional Plan Bay Area plan which ABAG/MTC updates every four years. Cities which have transit stations but which do not volunteer to create PDAs received dramatically lower housing allocations for the 5th cycle, which organizations such as Public Advocates and the Public Interest Law Project have argued since 2011 is a practice in violation of California’s Housing Element law.11 For these reasons, it is important to test to what extent race is associated with cities’ housing allocations. 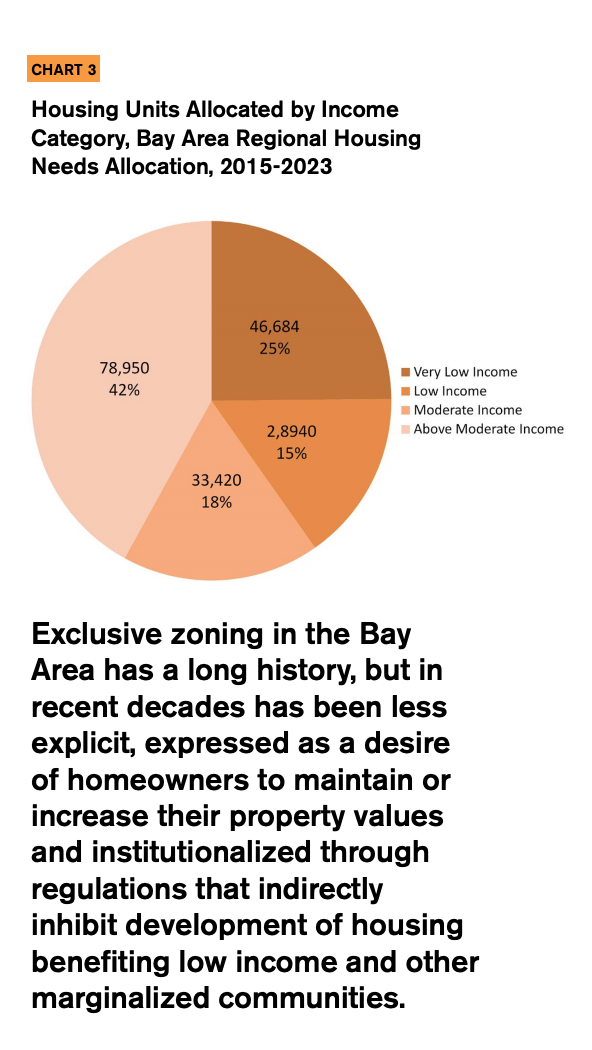 Our analysis revealed that there were moderately strong relationships between the percentage of cities’ non-Hispanic white12 populations and the total number of units allocated in the moderate, low, and very low income categories (hereafter referred to as “moderate and lower income”), as explored in the next section.