CONTRARY TO THE CLAIMS OF MANY observers that the recent rise in housing prices is solving the nation’s foreclosure and related economic crises, millions of families continue to face financial devastation from which many may never recover. This report examines national trends that are leaving many families behind and identifies the most troubled geographic “hot spots”– metro areas, cities, and neighborhoods in all regions of the country—where a significant portion of families are still “underwater,” which means they owe more on their mortgages than their homes are worth.

Despite home prices rising in many parts of the country, the total value of owner-occupied housing still remains $3.2 trillion below 2006 levels. Despite rising home prices, there are still some 9.8 million households underwater, representing 19.4 percent of all mortgaged homes—nearly one out of every five such homes. Underwater homeowners are significantly more likely to default on their mortgages than homeowners with positive equity.

In the first report of its kind, we analyze negative equity and foreclosure data together with race and income data, at the ZIP code level, the city level and the metropolitan area level. The report shows that if we drill down to the neighborhood level, a startling number of communities across the country still face very high underwater rates.

Almost five million families have lost their homes to foreclosure since 2008, and foreclosures continue at rates higher than prior to the Great Recession. For African Americans and Latinos specifically, between 2005 and 2009, they experienced a decline in household wealth of 52 percent and 66 percent, respectively, compared to 16 percent for whites. This reflects, in large part, disparities in foreclosure rates among these groups, since for most Americans, and particularly for people of color, their homes are their largest source of wealth. Homeownership constituted 92 percent of the net worth for African Americans and 67 percent for Latinos, compared to 58 percent for whites.

While some communities across the country have benefited from rising home prices, this upward trend is expected to slow down dramatically in 2014, which means the hot spots that have been left behind by the recovery are not likely to see their fortunes substantially improve any time soon. Market forces alone will not bring the recovery to these severely impacted communities. 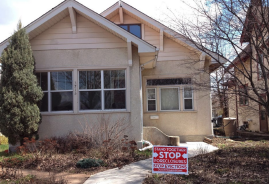 The housing crisis is far from over for the families living in these hot spots. Despite a wide variety of federal initiatives and some voluntary programs, the crisis in hard-hit communities has not been resolved, primarily because one of the most effective tools—principal reduction to bring mortgages to their current market values—has been little utilized. We need bold intervention to make up for the shortcomings and inadequacies at the federal level.

Here are some key steps that should be taken immediately to address this crisis and ensure an equitable recovery for all homeowners: