ON FEBRUARY 4, 2016, THE UNITED STATES and 11 other Pacific Rim nations signed the Trans-Pacific Partnership (TPP), a massive plurilateral trade and investment agreement that sets rules to which all signatory countries—pending ratification by each—must conform their domestic policies covering financial and other services, intellectual property, government procurement, internet policy, state-owned enterprises and competition, food and other product standards and safety inspections, and more. The pact is designed as an enforceable regime of trade and investment governance in the Pacific Rim that reregulatesi the economic order of signatory nations in Asia, Oceania, and the Americas, geared towards the benefit of corporate interests.

The mega-regional agreement was negotiated by Australia, Brunei, Canada, Chile, Japan, Malaysia, Mexico, New Zealand, Peru, Singapore, Vietnam, and the United States.ii Covering one-third of all world trade—with its signatory member countries producing 40 percent of global economic output—the TPP is the largest regional trade accord in history.1 And, because it is designed as a “docking” agreement, meaning other countries willing to meet its terms can join at any time, the initial 12 TPP countries are not intended to be the only signatories.

The Trans-Pacific Partnership is one of two mega-regional trade and investment deals being negotiated simultaneously. The other is the Transatlantic Trade and Investment Partnership (TTIP)—a proposed trade and investment agreement between the United States and the European Union—which is considered to be the Atlantic counterpart of the TPP. Additionally, negotiations are underway for a major plurilateral sectoral agreement, the Trade in Services Agreement (TiSA). It includes 50 countries from across the world and would cover 70 percent of the global services economy.2iii Among the three, the Trans-Pacific Partnership is particularly significant, as it is designed to be the inaugural agreement for the proposed TPP-TiSA-TTIP triad3 , which would establish binding global rules particularly favorable for multinational and transnational corporations.iv

Supporters of Free Trade Agreements (FTAs) have often argued that the pacts’ regimen of trade liberalization, investor and intellectual property rights, and regulatory policies favorable to commercial interests has far-reaching benefits.v According to the US International Trade Administration, FTAs function to open up foreign markets to US exporters and enhance investment flows to the benefit of all parties and peoples involved: “Trade Agreements reduce barriers to US exports, and protect US interests and enhance the rule of law in the FTA partner country…[via] the reduction of trade barriers and the creation of a more stable and transparent trading and investment environment.”4

Furthermore, proponents of the North American Free Trade Agreement (NAFTA) and the Central American Free Trade Agreement (CAFTA) have consistently advanced such narratives.5 The Office of the United States Trade Representative (USTR) stated that the TPP is an “upgraded NAFTA” and that it would help “increase Made-in-America exports, grow the American economy, support well-paying American jobs, and strengthen the American middle class” by eliminating more than 18,000 taxes and other trade barriers on American products across the member countries of the agreement.6

Despite the claims by the US Trade Representatives and other FTAs proponents that such pacts promote progress and prosperity, our analysis in this report instead finds that the TPP presents serious challenges to the sovereignty of participating countries and the rights of their populations by increasing the relative power of corporations that, by design, are driven by profit over all else. According to Alfred-Maurice de Zayas, the United Nations Special Rapporteur on the Promotion of a Democratic and Equitable International Order, the TPP would “transfer regulations of corporations to corporations themselves, and away from democratically elected governments,” with respect to labor and employment, health care and medicine, the environment, and more.7

Were it to be approved by Congress, the TPP would allow corporations greater ability to evade environmental and consumer protections, limit the availability of affordable medicines,vi regulate the Internet on behalf of the content industry, and affect the movement of workers, among other outcomes.vii The TPP would also further entrench an international legal regime that allows corporations to bypass domestic courts to challenge—before extra-judicial tribunals—non-discriminatory domestic policies and government actions that corporations believe violate their new TPP rights and privileges.

The TPP would potentially undermine accountable and democratic governance by imposing binding rules that could not be altered due to consensus of all signatories members. Such rules could threaten a newly elected government with trade sanctions or damages for implementing policies on behalf the public they serve. Furthermore, were the TPP to be implemented, the least economically powerful of the TPP member countries—among them, Vietnam, Malaysia, Chile, and Peru—would have investment, intellectual property, trade, agriculture, procurement, and other policies foreclosed to them.

How could such extreme terms have been negotiated? For the past seven years, the terms of the deal have been a closely guarded secret. Appointed government officials and corporate actors were given more access to the text than elected officials and the public.8 Indeed, in the United States more than 500 official trade advisors—mainly representing corporate interests—had security clearance to access the TPP text and had a special role in formulating the US positions and language for each chapter.

The development and scale of the TPP raises serious questions about how a corporate-driven, heavily privatized, and re-regulated world economy—all of which the deal promotes— would undermine public accountability, thwart democratic mechanisms, and do harm to millions of people whose lives and livelihoods would be impacted.

The development and scale of the TPP raises serious concerns about how a world economy reregulated to suit corporate interests would undermine public accountability and democratic processes. These concerns prompt us to more fully analyze the context of the TPP agreement and to identify strategies for addressing the concerning trends that the TPP represents. These findings also prompt us to present these concerns to the public, which would be harmed by greater corporate control over the economic rules that have real consequences for peoples’ wellbeing.

The Haas Institute for a Fair and Inclusive Society is committed to promoting an inclusive, just, and sustainable society and we do so through conducting engaged research and employing strategic communications to address issues faced by the most marginalized populations. Our research and analysis of the TPP agreement raises serious concerns about the trade deal with respect to the following three principles:

This report explains how the Trans-Pacific Partnership undermines these key principles. Our analysis of this trade agreement raises serious questions that should be of concern to all who are interested in working towards a free and open society—including local government officials, legal and public interest advocates, labor unions, medical and healthcare workers, environmental advocates, consumer groups, and all social justice advocates more broadly. This report provides an account of the development, scale, scope, and potential implications of the TPP, as well as accounts of ongoing opposition to the agreement. In doing so, this report addresses the ongoing corporatization of US economic, legal, and political systems, of which the TPP is a particularly egregious instantiation.

It is imperative that those interested in fair and equitable public policy are able to have adequate information and informed analyses to engage in the forthcoming US political debate about the TPP and whether it should be approved or rejected by the US Congress. As such, this report also aims to aid in a public response. 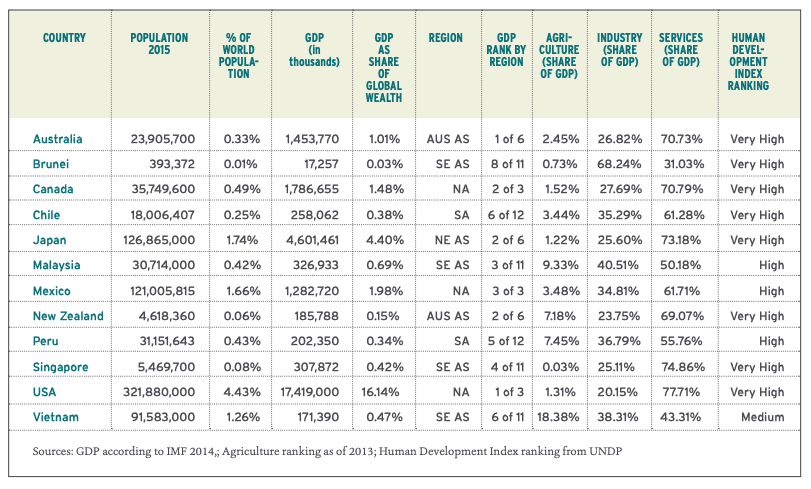