The Road Not Taken

The Kerner Commission rReport promised to offer a dramatic set of remedies to reverse the exclusion faced by African Americans across all areas of society. Yet it failed to inspire the political action required to carry out crucial reforms in policing, housing, jobs, education, employment, criminal justice, transportation, and other areas. As a result of the failure to implement fully, let alone modestly, the report’s recommendations, US society today bears an eerie resemblance to the 1960s when extreme racial disparities plagued the country and led to waves of social unrest and rebellions by a neglected, stigmatized, and excluded segment of the citizenry. The mass protests and confrontations between police and majority-Black community members in Ferguson, Baltimore, Milwaukee, and elsewhere in this decade, and those that took place in previous decades in Cincinnati, Los Angeles, Miami, and many other cities, are all reactions to the same problems that prompted the “long, hot summer” of 1967 that the Kerner Commission set out to investigate.

This is not to say that nothing has changed since the report’s release in 1968. Our examination of just two areas highlighted in the Kerner Report—policing and housing—reveals the nuances of how our governments and institutions dealt with questions of race, then and now. In the area of policing and criminal justice, we found that in some cases, the situation has actually become worse. Incarceration rates are drastically higher today, proportionally and in real numbers, for African Americans than they were in the 1960s. In many cases, police still operate using the “broken windows” philosophy, which leads to more frequent and aggressive policing in mostly Black, high-poverty urban areas. Despite research showing that foot patrols help build police-community relations, motorized patrols are overused.

Police shootings remain a serious, persistent, and unresolved problem, largely because of lax standards on the use of force and inconsistent and weak guidelines. Regarding the Kerner Commission’s call to make it easier for people to lodge complaints against officers for misconduct, police departments around the country now allow grievances to be filed by mail, electronically, and in person at police stations. But the bulk of investigations into incidents remain to be carried out not by independent third parties as the Commission had recommended, but by police departments’ internal affairs offices, which lack transparency and remain an impediment to earning public trust. And of the complaints that are processed, very few result in actions taken against the officers in question.

While the Obama administration took steps to improve police-community relations by establishing the 21st Century Policing task force in the wake of the Michael Brown killing in Ferguson, only a handful of police departments have signed onto the voluntary program. Furthermore, the current administration has pursued policies to limit federal oversight of local police departments that systematically violate civil rights.

In the area of housing, our local, state, and federal governments haven’t meaningfully addressed recommendations put forth by the Kerner Commission that acknowledged the key need to focus on racial integration. Rather than putting forward uncompromising plans to enforce residential integration, governments have instead chosen to put resources toward revitalizing urban centers where low-income African Americans are concentrated. The result has been to reinforce segregation and its many social consequences, such as the disparities in academic achievement, health, income, wealth, incarceration, life expectancy, encounters with police patrols, and exposure to violence. 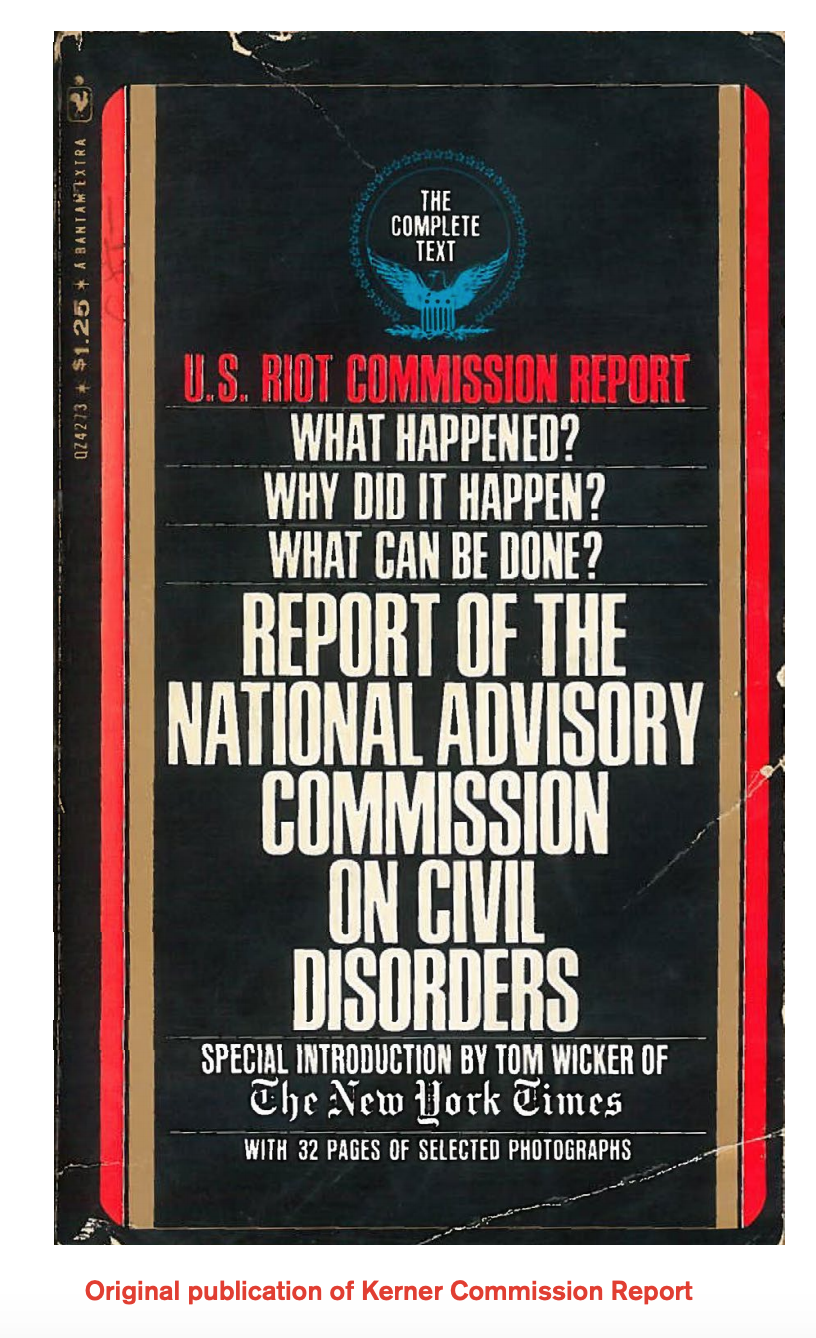 The period in which government programs for integration appeared most promising came during the Johnson, Nixon, and Carter administrations. Then, Housing and Urban Development officials proposed serious plans to compel local governments and housing developers to pursue integration by calling for the elimination of zoning ordinances that were designed to keep suburbs exclusively white, to encourage the construction of new, racially integrated communities through federal grants, and to withhold funds from white suburbs that refused to desegregate. But these programs failed to muster the political support necessary for implementation. The Obama administration’s requirement that communities take a first step toward affirmatively furthering fair housing has been undermined by the Trump administration.

To ensure that for another 50 years we don’t remain two societies, separate and unequal, we should recommit to the still-relevant recommendations of the Kerner Commission, as well as pursue more creative and ambitious policies where even the Commission’s recommendations fell short.