Part I: Then and Now

Amid Some Improvements, Inequality Persists in American Systems

We have mostly fulfilled the Kerner Commission warning that without dramatic reform, the nation would become “two societies, one black, one white—separate and unequal.” Since the 1960s, in important respects, the lives of African Americans have improved. In many respects, they have remained unchanged. And in some respects, they have deteriorated. In almost all respects, unacceptable levels of racial inequality have persisted.

Perhaps the most important area of improvement has been the growth of the Black middle class, and its significant incorporation into the mainstream of American life. The most obvious symbol of this was the election and reelection of a Black president. The most obvious symbol of its limitations was the reaction in the subsequent election of a president whose campaign and subsequent actions emboldened white supremacists.36

In 1966, shortly before the Kerner Commission began its deliberations, one of us participated in a study of policymaking in Chicago’s corporate sector. We identified 4,000 such corporate leadership positions: not a single one was held by an African American. The only executives who were African American worked at insurance firms or neighborhood banks for which the segregated Black community provided a customer base.37 Today few, if any, mainstream corporations could function without racially diverse management.

This improvement has relied upon the growth of the well-educated African American population. In 1980, only 10 percent of young African American adults old enough to have completed college did so. Subsequently, this share grew steadily and by 2017, 23 percent had college degrees, an increase of 128 percent. 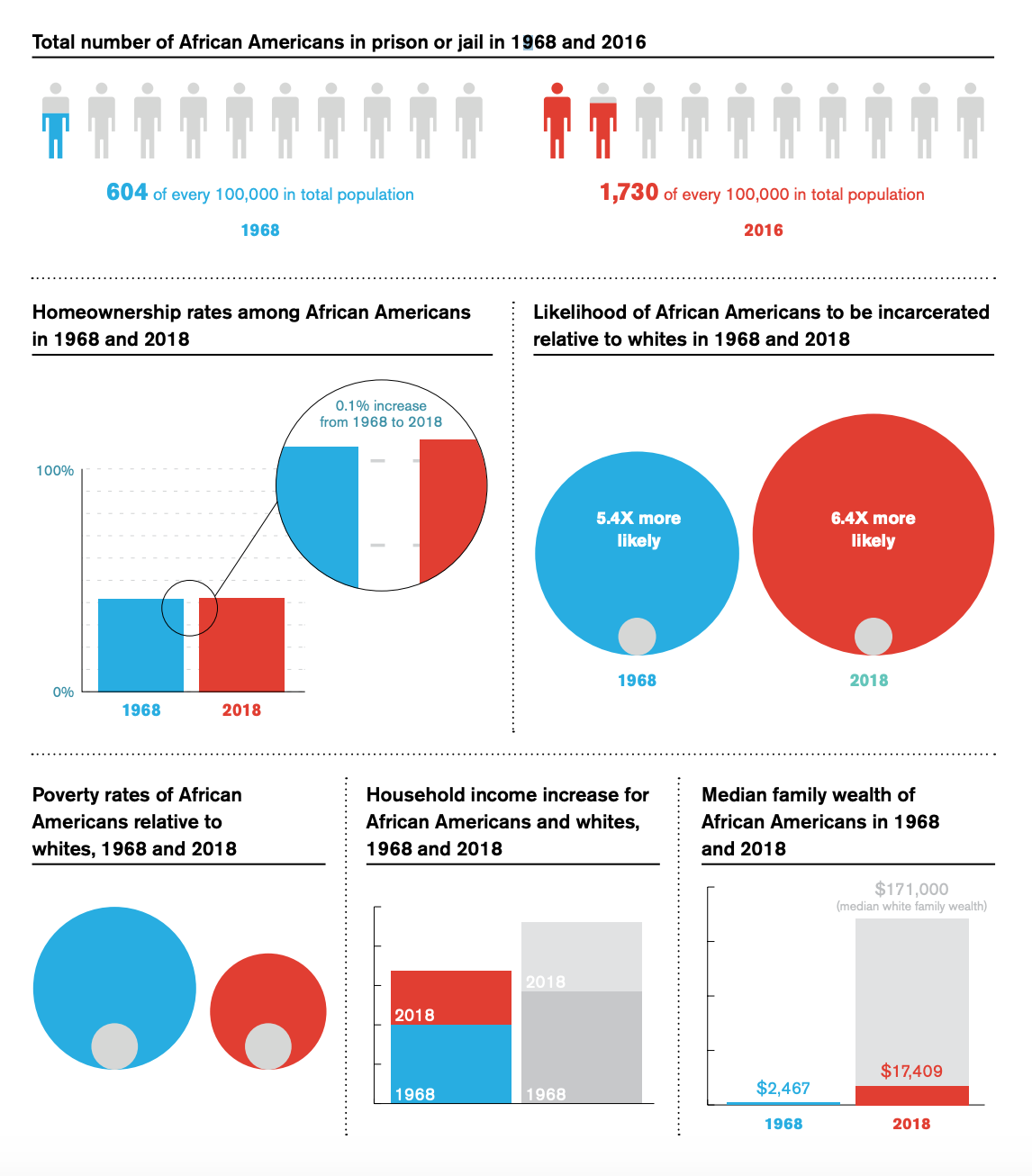 Most American families accrue wealth from owning homes that appreciate more rapidly than overall inflation, generating equity. The African American home ownership rate of 41 percent was unchanged from 1968 to 2015, while the white rate grew from 66 percent to 71 percent. Yet the wealth difference is not solely attributable to the difference in homeownership rates. Rather, it is also that whites typically own homes in white segregated neighborhoods where values appreciate more rapidly than in the segregated neighborhoods where African Americans typically own homes.43

Above, we described the increase from 1970 to 2017 in the share of young African American adults who had bachelor’s degrees. There was similar growth in the share who had completed secondary education, either by graduating from high school or by earning a GED (general educational development) certificate. From 1970 to 2017, this share increased by more than half, from 58 percent to 92 percent.48 This growth narrowed the gap between the secondary school completion rates of white and Black students. The share of young white adults with a complete secondary education grew during this period from 78 percent to 96 percent. Thus, by 2017, the Black-white gap in secondary completion rates had nearly disappeared (92 percent to 96 percent). However, while this is good news with regard to equality in literacy and quantitative skills necessary for democratic participation, the labor market value of a secondary school credential-only had diminished by 2017.