Groundbreaking research over the past decade by UC Berkeley Economics Professor and Haas Institute Economic Disparities Cluster member Emmanuel Saez has focused national attention on this income inequality. Saez has used tax records to reveal that the share of the national income received by the top one percent of residents in the United States has more than doubled over the last thirty years, rising from 9% of the total in 1976 to more than 22.5% (including capital gains) in 2012, as illustrated in FIGURE 1. 6 The average annual income for the top one percent of households in 2012 was about $1.3 million, as compared to the median household income of $51,017.7

Research findings of Hilary Hoynes, Haas Institute Economic Disparities Cluster Chair and Professor of Economics and Public Policy at UC Berkeley reveal that the recent recession has only exacerbated this inequality because its effects were not evenly distributed. In terms of unemployment rates, the recession affected men more than women, African Americans and Latinos more than whites, and younger workers more than older workers (see FIGURE 3). The recession’s impact on unemployment for black men was almost double that for white men and the impact for black women was almost triple that for white women.8

Overall, declining workforce participation rates have added a significant obstacle in the path of working and middle class families’ efforts to move further up the economic ladder and have pushed many families into poverty. These challenges are reflected, for example, in an increase in the poverty rate from 12.5% in 2007 to 15.0% in 2012. More than 1 in 5 children currently live in poverty.9 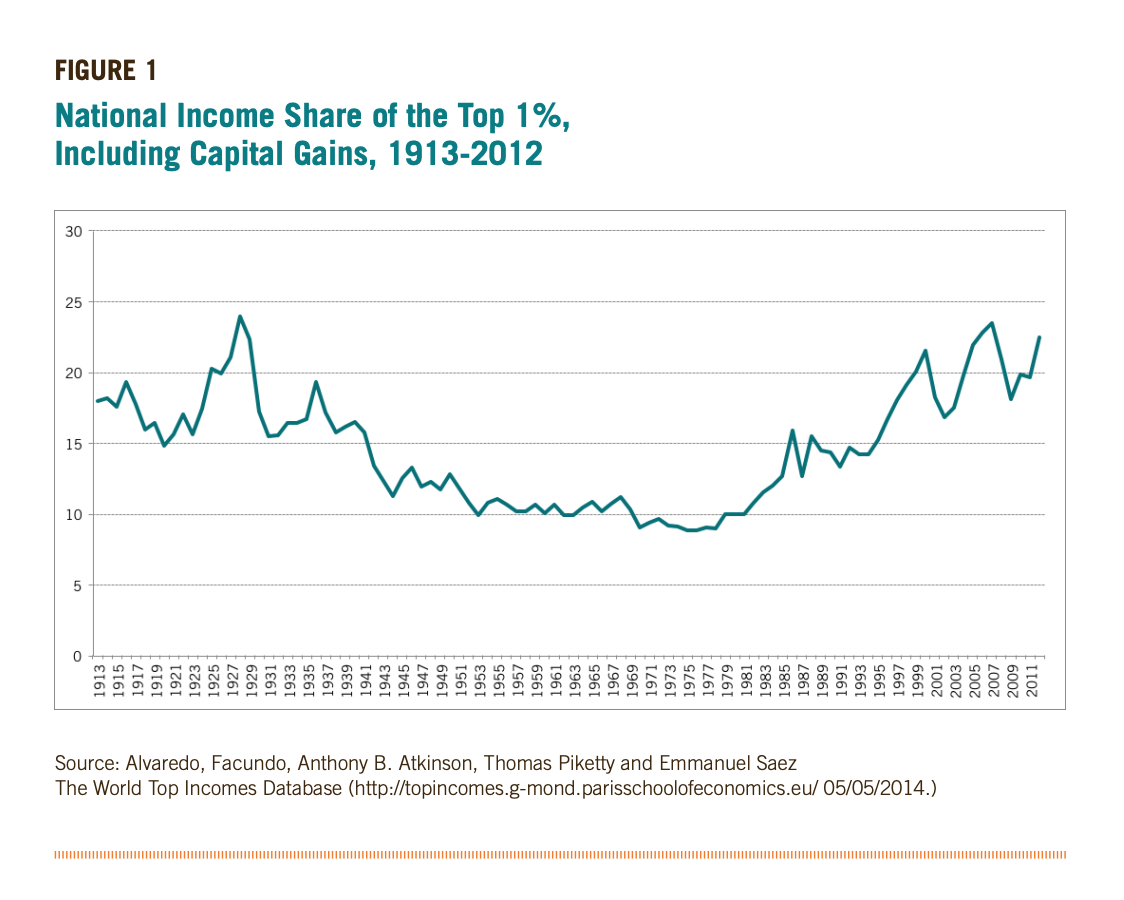 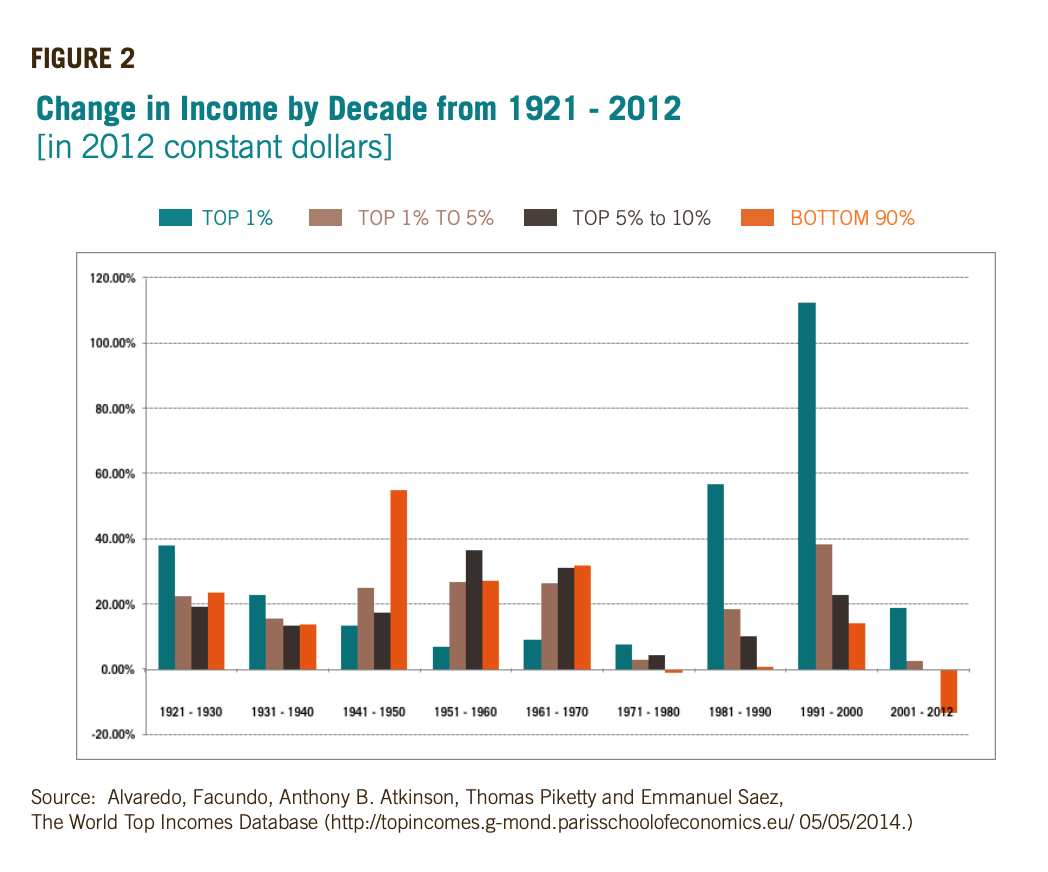 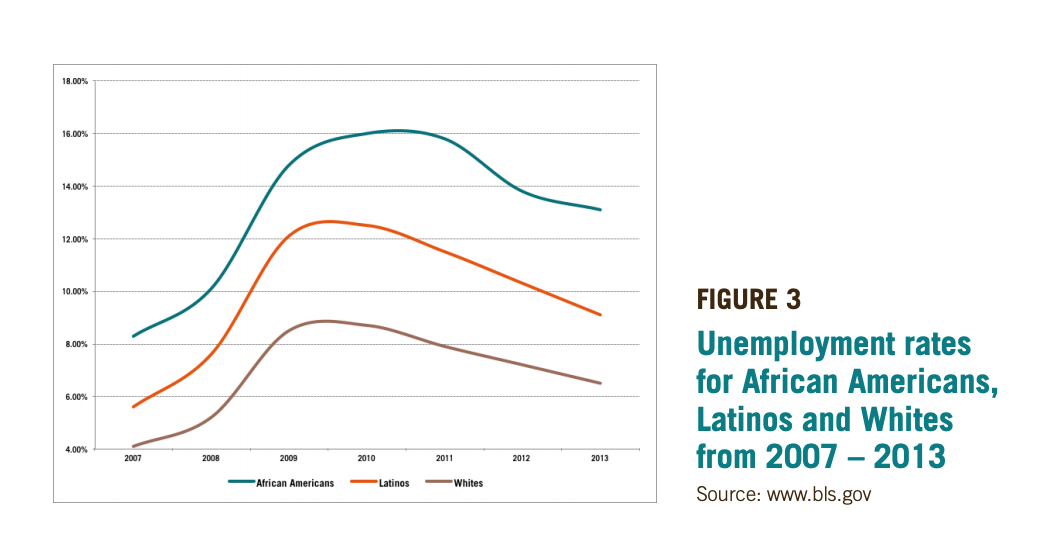 A GROWING ECONOMY BUT A SHRINKING MIDDLE CLASS

As the declining share of national income received by the bottom 60 percent of earners and the rising poverty rate demonstrate, the middle class is shrinking as households are pushed further down the income distribution. Former U.S. Labor Secretary Robert Reich, a member of the Haas Institute Economic Disparities Research Cluster and Professor of Public Policy at UC Berkeley, has highlighted the effect of the growing economic inequality on the middle class and the economy overall. Between 1990 and 2012, the proportion of households with incomes between $40,000 and $100,000 (in 2012 constant dollars) fell from 43% to 39% while the proportion of households with incomes less than $40,000 (in 2012 constant dollars) increased from 35% to 39%.10 The middle class is increasingly being pushed toward poverty, but not because the U.S. economy has failed to grow.

During the three decades following the Second World War, the United States witnessed rapid upward mobility as productivity and wages grew together and gains were relatively evenly distributed over the income scale. Since the 1980s, however, productivity has continued to grow (increasing by 78% between 1980 and 2009) yet median wages have stagnated.11 Indeed, Reich points out that in 2007 a male worker with a median wage of slightly over $45,000 earned less than a male worker with the same income level earned 30 years before (accounting for inflation, but not including fringe benefits).12 If the gains to the economy had been equally divided among Americans, Reich demonstrates, the typical person would have been 60 percent better off economically than she was in 2007.13 Where, then, did the economic gains from increased productivity go? A growing share went to the top one percent, as illustrated by FIGURE 4.

Reich highlights the similarities between income inequality in 1928, just before the Great Depression, when the share of national income going to the top one percent peaked at over 23%, and income inequality in 2007, when it again peaked at over 23%, just before the recent recession, as illustrated by FIGURE 1. After 1928, the share of national income going to the top one percent declined steadily into the 1970s, when it reached about 9%, before beginning to increase again. As more income went to the very highest earners after the 1970s, the savings rate declined and the middle class took on increasing amounts of household debt (including mortgages), which rose from 55% of household income in the 1960s to 138% in 2007. Reich argues that this concentration of wealth is bad for everyone because the declining purchasing power of the middle class is limiting overall economic growth. The majority of the economy is based on consumer spending, and Reich argues that if middle class consumers don’t have the disposable income to purchase what the economy is capable of producing because that income is going to high earners who spend only a small fraction of their tremendous incomes, then the economy cannot reach its full potential.15 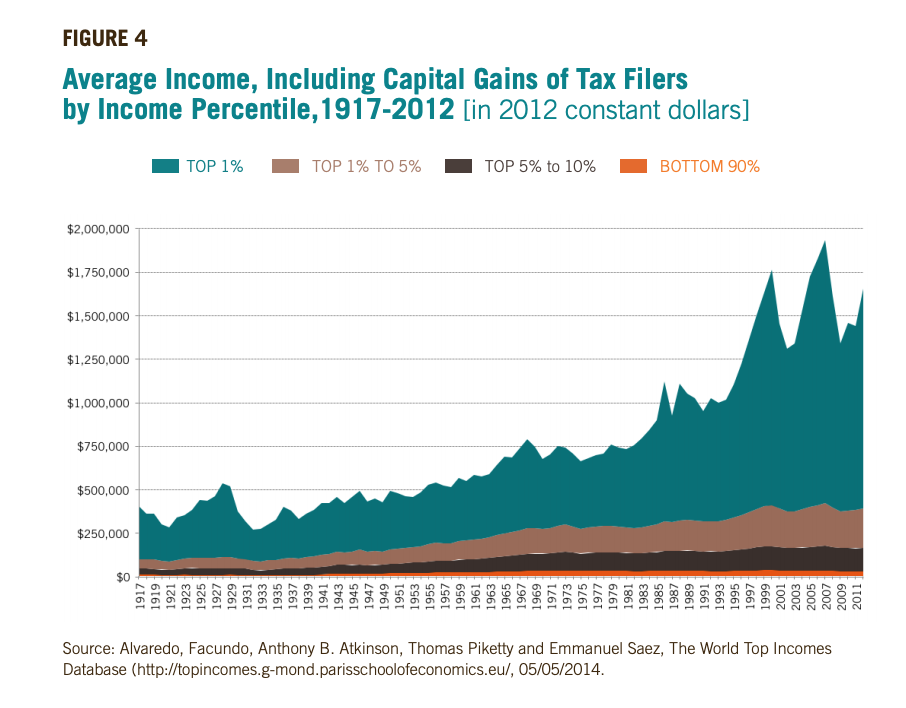 The polarization of the wage structure (generating more high- and low-skill jobs and fewer middle-skill jobs) has only accelerated during the recent recession and its aftermath. Although automation and international trade since the 1970s have contributed to a persistent decline in middle-skill employment, the recent recession has exacerbated this hollowing out of the middle-class. During the recession, middle-skill jobs experienced the sharpest and most lasting decline and the majority of the jobs created post recession have been in lower-skill, lower-wage occupations.16 French economist Thomas Piketty, in his book Capital in the Twenty-First Century, points out that this growing income and wealth polarization is related to the growing return to capital and the shrinking return to labor as shares of national income. 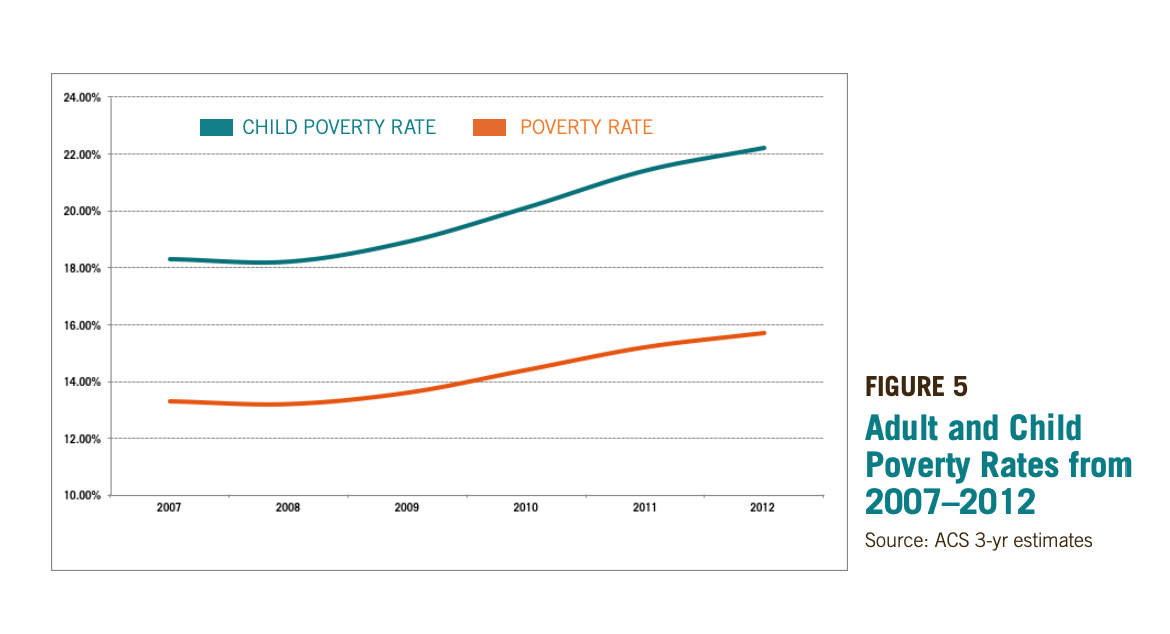 One of the most surprising findings in this research is that intergenerational mobility varies substantially by metropolitan region. The probability that a child from the bottom fifth will end up in the top fifth of income earners is only 4.4% in Charlotte but nearly three times higher in San Jose—12.9%.19 A child whose parents’ earnings were in the 20th percentile ends up, on average, in the 45th percentile in Salt Lake City, but only the 35th percentile in Indianapolis.20 In short, the geographic location where one grows up matters significantly for where one ends up economically as an adult.