Toward the Abolition of Biological Race in Medicine

By Noor Chadha, Bernadette Lim, Madeleine Kane, and Brenly Rowland
(Click to download a PDF of the Executive Summary) 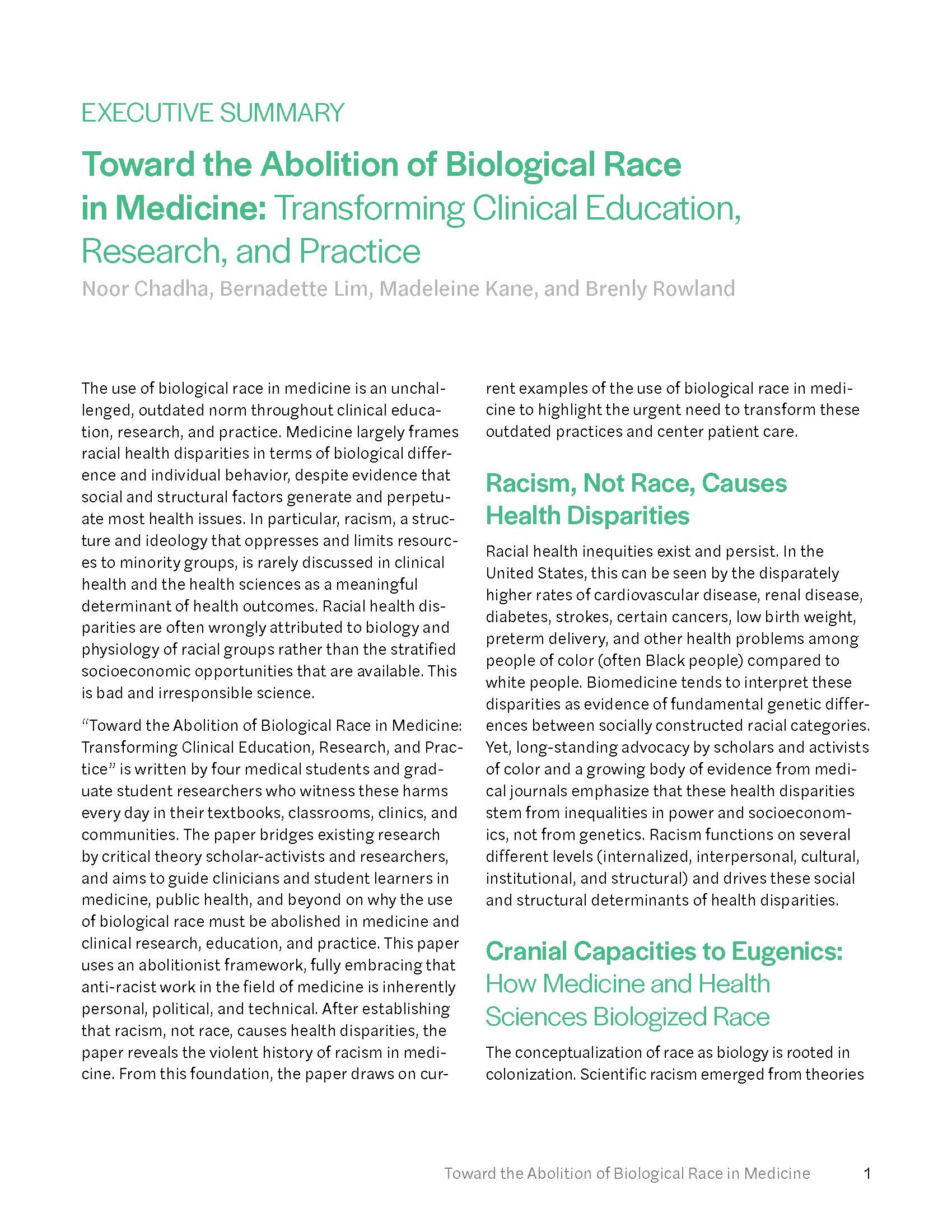 The use of biological race in medicine is an unchallenged, outdated norm throughout clinical education, research, and practice. Medicine largely frames racial health disparities in terms of biological difference and individual behavior, despite evidence that social and structural factors generate and perpetuate most health issues. In particular, racism, a structure and ideology that oppresses and limits resources to minority groups, is rarely discussed in clinical health and the health sciences as a meaningful determinant of health outcomes. Racial health disparities are often wrongly attributed to biology and physiology of racial groups rather than the stratified socioeconomic opportunities that are available. This is bad and irresponsible science.

“Toward the Abolition of Biological Race in Medicine: Transforming Clinical Education, Research, and Practice” is written by four medical students and graduate student researchers who witness these harms every day in their textbooks, classrooms, clinics, and communities. The paper bridges existing research by critical theory scholar-activists and researchers, and aims to guide clinicians and student learners in medicine, public health, and beyond on why the use of biological race must be abolished in medicine and clinical research, education, and practice. This paper uses an abolitionist framework, fully embracing that anti-racist work in the field of medicine is inherently personal, political, and technical. After establishing that racism, not race, causes health disparities, the paper reveals the violent history of racism in medicine. From this foundation, the paper draws on current examples of the use of biological race in medicine to highlight the urgent need to transform these outdated practices and center patient care.

Racial health inequities exist and persist. In the United States, this can be seen by the disparately higher rates of cardiovascular disease, renal disease, diabetes, strokes, certain cancers, low birth weight, preterm delivery, and other health problems among people of color (often Black people) compared to white people. Biomedicine tends to interpret these disparities as evidence of fundamental genetic differences between socially constructed racial categories. Yet, long-standing advocacy by scholars and activists of color and a growing body of evidence from medical journals emphasize that these health disparities stem from inequalities in power and socioeconomics, not from genetics. Racism functions on several different levels (internalized, interpersonal, cultural, institutional, and structural) and drives these social and structural determinants of health disparities.

The conceptualization of race as biology is rooted in colonization. Scientific racism emerged from theories of biological inferiority, including Carl Linnaeus’s polygenism and Dr. Samuel Morton’s efforts to compare cranial capacities of white colonizers, native people, and enslaved people. These flawed theories cemented societal conceptions of skin tone differences and non-whiteness as biological concepts. Such historical context laid the groundwork for racial inequality, including the expropriation of property from natives, denial of political rights, slavery and other forms of coercive labor, and explicit extermination and lynching of non-white people.

A clear thread can be drawn from the scientific racism of scientists like Linnaeus and Morton in the nineteenth century to institutionalized racism in science and medicine today. Morton was a part of the “American School” that perpetuated social Darwinism, a theory claiming that certain groups of people were “less fit” than others, and therefore less deserving of survival. As these worldviews began to popularize and become normalized in scientific and everyday discourse, it paved the way for the eugenics movement of the twentieth century. Eugenicists repeated the arguments of social Darwinists before them. In both Europe and the United States, eugenicists aimed to encourage the reproduction of more “fit” races and extermination of those who were “biologically inferior.” In the United States, eugenics took the form of forced sterilization, segregation, and antimiscegenation laws, all specifically aimed at the extermination of nonwhite people. In Germany, Nazi doctors practiced eugenics by slaughtering, torturing, experimenting on, and murdering millions of people. The perpetrators of these crimes were trained physicians and often distinguished scientists who were inspired and actively influenced by eugenicists in the United States. This legacy underlies the practice of race-based medicine today.

Race-Based Medicine in Diagnosis and Treatment

The current misuse of race as a risk factor is rampant across clinician discussions including but not limited to hypertension, kidney disease, lung function, and genetics. This misuse is harmful and violent to patient care of Black and Brown communities. Clinicians often use a patient’s skin color, race, and/or ethnicity as heuristics to determine their diagnosis and treatment plan. In fact, race serves as a shortcut for clinical thinking from the onset of medical training. This shortcut can be dangerous and inaccurate. Firstly, it enforces racial bias that may be present or introduces new ones. This translates directly to clinical care, where a patient’s race is seen as a risk factor for disease and requires that providers associate certain illnesses with certain races. As such, providers may overlook diseases in patients of races and ethnicities that are not traditionally associated as “risk factors.” They may also never inquire into the root causes of illness for a person experiencing racism and inequality (such as structural and social determinants of health) or may miss more complicated and nuanced diagnoses. Furthermore, race is dangerously built into algorithms that are standardly used for diagnosis across various fields of medicine, especially for cardiovascular disease, kidney disease, lung function, and genetics. This paper details more carefully how these faulty algorithms are embedded in everyday medicine, noting how what could be considered “normal” function for Black people is repeatedly considered pathologic or unhealthy for white people. This discrepancy leads to late diagnoses and poorer treatment for Black people compared to their white counterparts.

Despite the many ways in which new scientific developments like precision medicine threaten to entrench biological racism, new fields such as epigenetics, developmental origins, and life course research are contributing to our understanding of how racism, not race, has biological effects on the body. In this section, we talk more about how epigenetics and other biopsychosocial fields are pulling together biology, psychology, and upstream determinants of health to answer how racism “gets under the skin.” We show how the social and structural determinants of health (mediated or created by racism) can literally embed themselves in our cells and result in the health disparities and injustices we witness today.

As physicians-in-training, we envision a world where the social construct of race is not conflated with biology, and where the health consequences of racism are acknowledged, addressed, and cared for in all their forms.

To make this a reality, medicine must adopt antiracist institutional practices regarding research, practice, and education.