Opening the Door for Rent Control

All Californians have experienced the impacts of today’s housing crisis in one way or another, but for decades the state’s low-income renters have carried the largest burden of housing costs. While rents have risen rapidly since 2011 in California and in the US as a whole, California rents have increased faster than the rate of inflation for most of the past forty years. The state’s largest metropolitan areas have faced the most severe crises, with rents increasing at far faster rates over a longer period of time (Figure 1). According to the US Census Bureau, the median contract rent in the Los Angeles area is 50 percent higher than the rest of the US, and the median contract rent in the San Francisco Bay Area is nearly double the national median.25 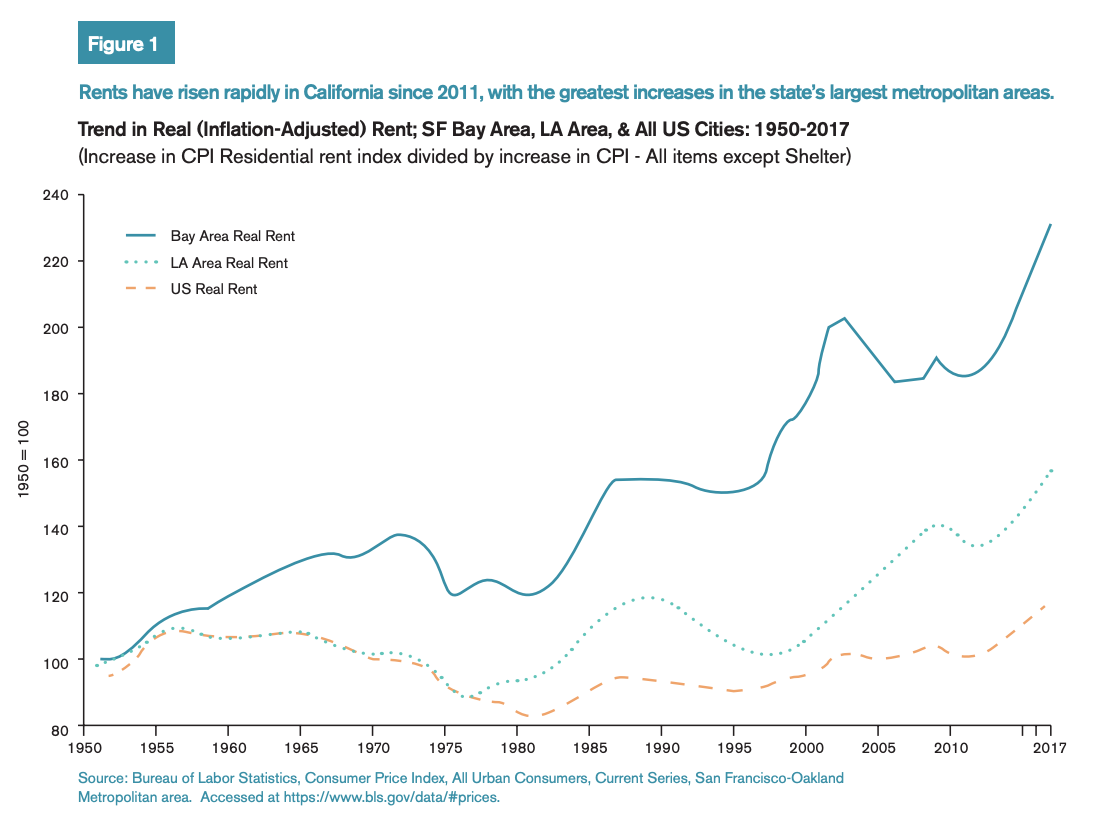 As rents have risen, renters' incomes have not kept pace (Figure 2).26 While it would take an hourly wage of $32.68 to afford the fair market rent (FMR) and utilities for a two-bedroom apartment, the mean wage among California renters is just $21.50 per hour.27 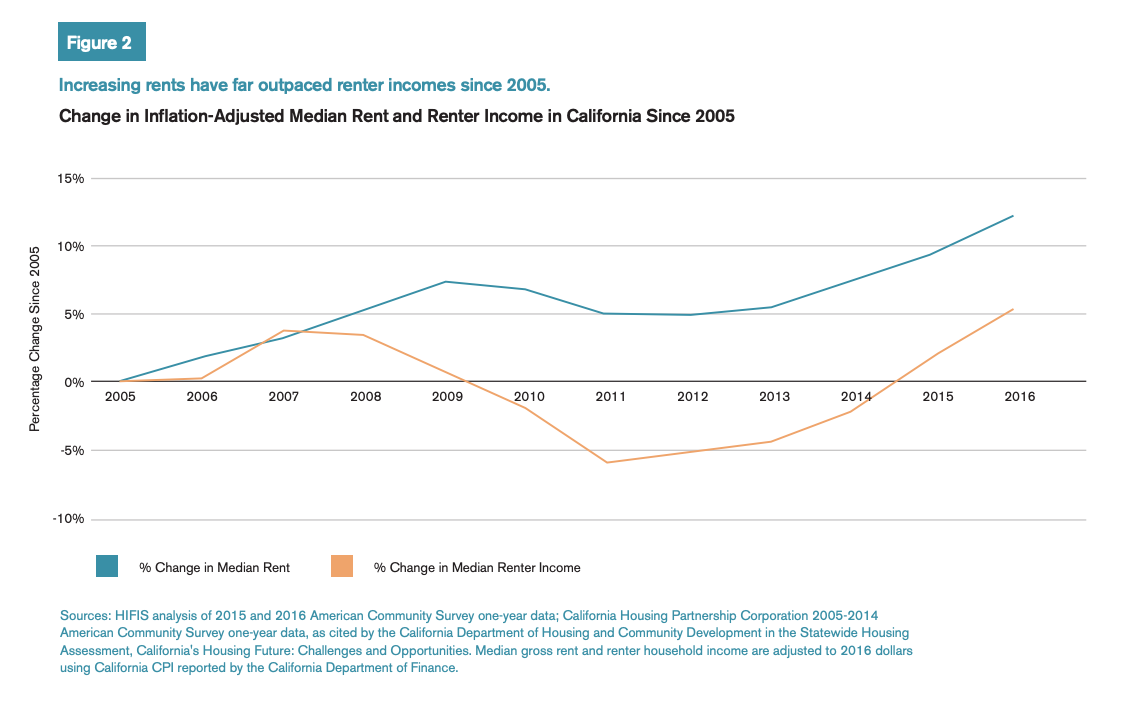 Too Many Californians Cannot Afford the Cost of Rent 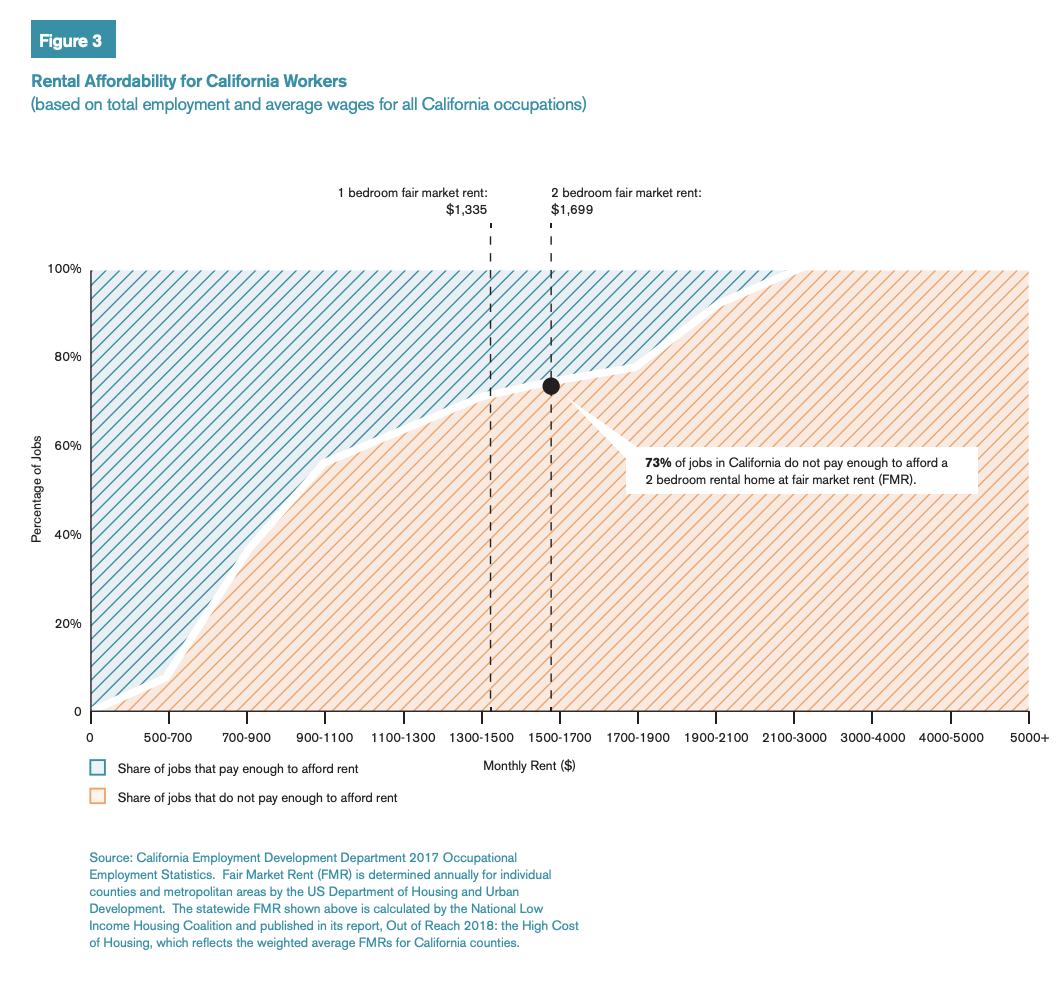 Among those who earn less than what is needed to afford the fair market rent are the millions who comprise the backbone of the economy. They help California meet some of its most fundamental and important needs, and they perform some of the most strenuous and thankless tasks. These occupations include food service and restaurant workers like servers, cooks, and dishwashers; health service providers like medical assistants and home health aides; educational occupations including preschool teachers, child care providers, teacher assistants and school bus drivers; and domestic workers like housekeeping and janitorial staff.

The combination of stagnating wages and increasing rents has limited the ability of renters, including the many who lost their homes during the 2010 foreclosure crisis, to recover from the recession’s devastating impacts. Housing cost burdens for renters remained at nearly the same level five years after the crisis (55 percent in 2015 and 56 percent in 2010). By contrast, rates of housing cost burden among homeowners fell from 43 percent to 33 percent over the same period, demonstrating the increasingly disparate impact of the housing affordability crisis on renters (Figure 4). 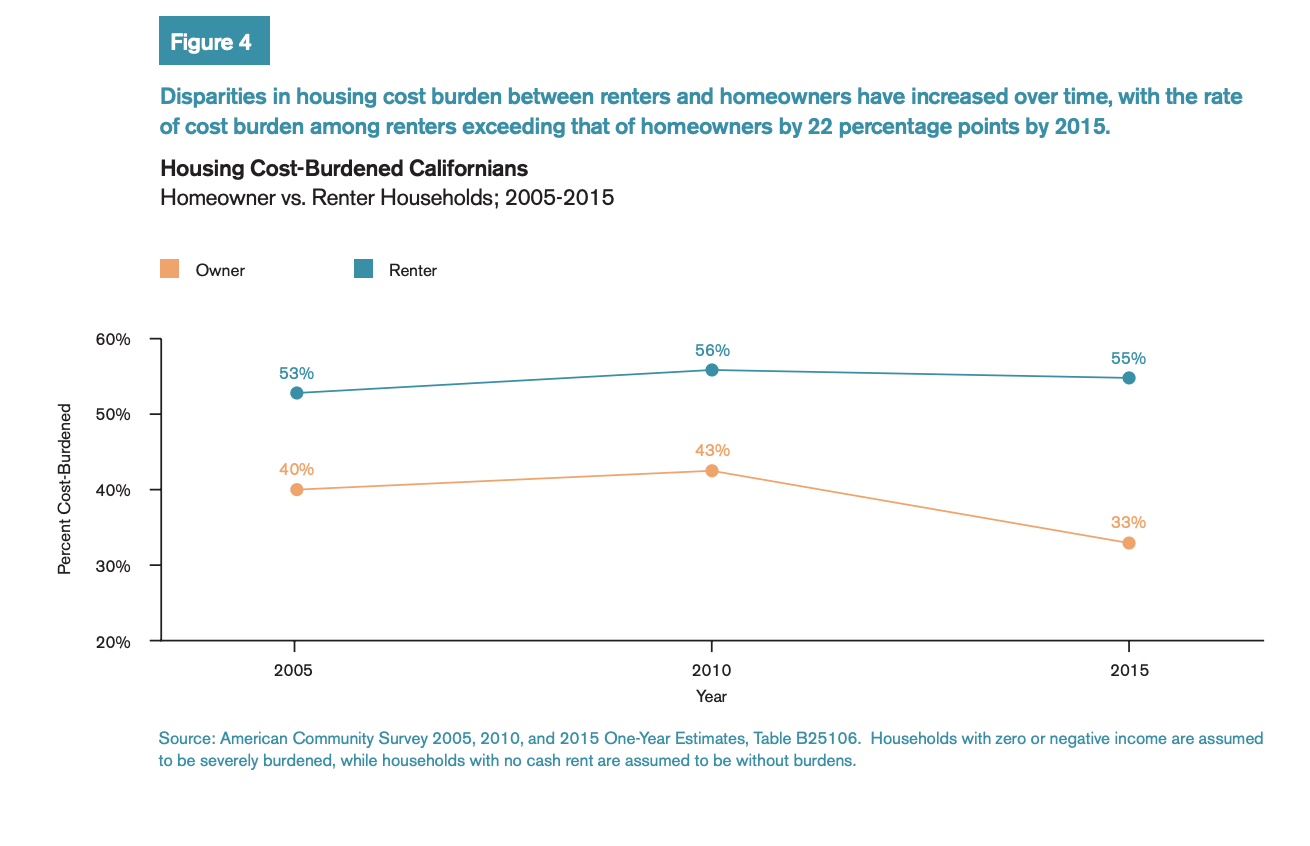 Beyond Monetary: the Human Cost of Housing Instability and Displacement

Research shows that when families are faced with housing insecurity or displacement, they are often forced to make tradeoffs between which basic needs to meet, which can severely affect physical and mental health.37 38 Their only option may be to accept poorly maintained housing that exposes them to a range of safety hazards, including pests, mold, lead and other harmful toxins, as well as dangerous appliances and fixtures that can cause physical injury.39 Many in California are forced into overcrowded housing arrangements, which can affect mental health, stress levels, relationships, and sleep, and which may increase the risk of infectious disease.40 California now has the highest rate of overcrowding among renter households (13.6 percent) in the country.41 Unhealthy conditions, combined with disconnection from one’s community, social networks, and sources of support, can result in stress and emotional trauma. Compared to those with stable housing, people experiencing housing insecurity are nearly three times more likely to be under frequent mental distress.42

Children who experience forced moves are particularly vulnerable. The Bay Area Regional Health Inequities Initiative finds that the health impacts of residential displacement are “intense for children, causing behavioral problems, educational delays, depression, low birth weights, and other health conditions.”43 These can translate into poor academic performance, marked by lower test scores, frequent absences in schools, and a lower likelihood of finishing school.44 This can have a cascade of lasting consequences for many other aspects of life, which, when layered upon one another, further reinforce structural inequalities.

This growing body of research shows that the lack of affordable, safe, and stable housing is associated with a range of negative impacts on individuals and families. Sociologist Matthew Desmond describes this relationship:

On the other hand, protecting low-income residents’ ability to stay in their homes and neighborhoods supports greater access to those opportunities that make a healthier, safer society. Housing stability has positive effects on physical, social, and psychological wellness, as well as educational attainment.50

Housing for all is about more than stabilizing costs for individual families; it is also about advancing our collective well-being as a society. What if California renters paid affordable rent and thereby had $24 billion51 more available to cover basic needs and infuse into our economy? What if the nearly $5 billion that the state government spends on homelessness each year52 went towards an array of other public resources and programs? What if California could substantially reduce its poverty rate—the highest in the nation—by lowering its high cost of living?53

California is increasingly a renter state, with over 17.5 million Californians living in renter households, equivalent to an increase of approximately 27 percent in the renter population since 2000.54 Yet when we consider the impacts of California’s policy choices, we typically fail to account for the fiscal and societal costs of their exclusion. If we choose not to address the needs of such a large and growing share of our population, we choose to limit ourselves. Perhaps more critically, we fail to imagine the great economic, fiscal, and environmental benefits of their stabilization that can improve our health and prosperity as a society.

With the crisis so widespread, negative impacts at the individual level add up, reinforcing existing inequities and affecting the strength of our society overall—from our economy and public institutions, to our social fabric and democracy.55 By confronting this reality, we lay the foundation for a more prosperous, resourced, and healthy future.

The mental and physical health impacts of housing unaffordability and displacement require vast public resources, including $5 billion of state funding annually on services for homeless individuals,56 with county governments shouldering a large share of the cost and responsibility of delivering services. For example, in Santa Clara County where 6 percent of the state’s homeless population lives, more than $3 billion worth of services went to homeless residents between 2007 and 2012, costing the community $520 million per year.57 A study commissioned by the County of Santa Clara and Destination: Home shows that these costs included “$1.9 billion over six years for medical diagnoses and the associated health care services—the largest component of homeless residents’ overall public costs, as well as $786 million over six years associated with justice system involvement—the second largest component of the overall cost of homelessness.”58

This strain on our healthcare systems and public budgets—in addition to the exponential expansion of jails and prisons through an unjust system that criminalizes homelessness—undermine California’s ability to advance and provide for the many other underfunded public needs, including education and student financial aid, workforce development, and safety net programs. Our failure to respond to immediate crises of displacement and homelessness also limits us from investing in essential programs, such as “Housing First” initiatives to create permanent supportive housing, which can more effectively, efficiently, and holistically serve the needs of lowincome Californians, instead of constantly responding to emergency situations.59

Housing instability and resulting negative health outcomes also impact the state’s workforce, economy, and environment. Workers without stable housing and/ or health conditions struggle to find and keep their jobs, and job losses can cause a downward spiral into deep poverty.60 Additionally, both the public and private sectors face challenges in hiring and retaining workers for roles that keep our economy running. As displaced residents are pushed out to the periphery where fewer employment opportunities exist, many are forced to commute long distances to urban centers for work, and with less access to public transit in suburban areas, this requires greater use of private vehicles.61 The housing crisis is thus contributing to congestion on our freeways and more time spent in cars for all drivers, which are associated with lower rates of physical activity and higher rates of stress.62 Longer commute times result in clear environmental and public health impacts, including decreased air quality and increased greenhouse gas emissions. For displaced residents, this tradeoff carries both health and financial costs; for every dollar increase in housing costs, a household’s transportation costs increase by 77 cents.63

In addition to the broad fiscal, economic, and environmental benefits, if all California renters paid only what they could afford for housing, California would move toward greater social equity, which is essential to an inclusive, stable, and sustainable economy.67 As it stands, the housing affordability crisis is exacerbating inequality, with seniors, Latinos, African Americans, low-wage workers, families with children, and people with disabilities facing the most severe burdens from the housing crisis. Rapidly increasing rents are displacing members of marginalized populations to areas with fewer resources, quality jobs, wellperforming schools, and other opportunities for upward mobility—essentially reproducing racial and socio-spatial segregation, particularly in suburban areas far from urban job centers.68 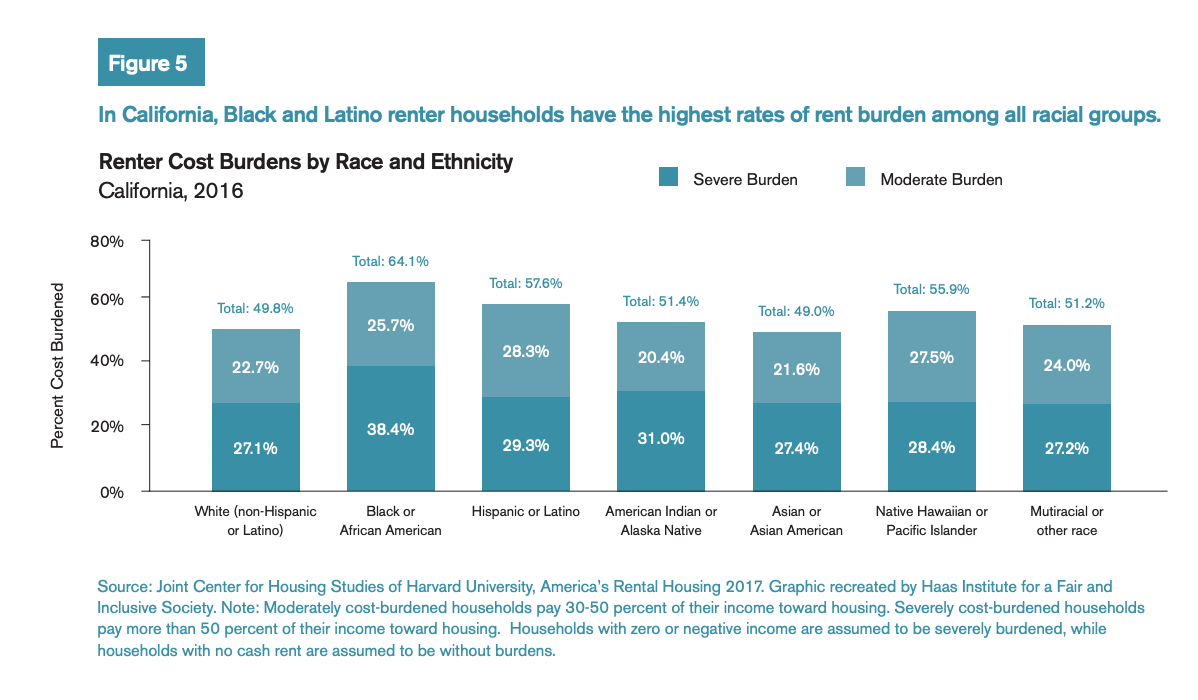 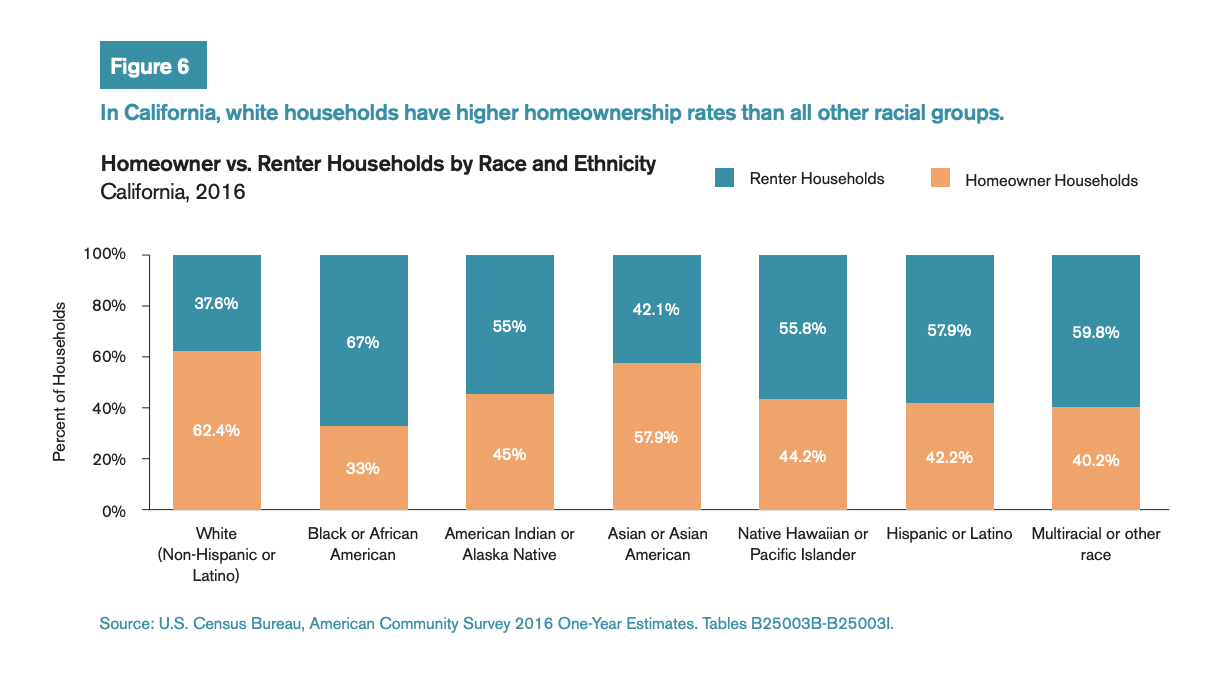 When housing costs increase beyond what is affordable, residents often have to relocate to an area with less expensive housing. This pattern of displacement is most glaring in historically low-income neighborhoods that are predominantly comprised of people of color. For instance, a significant share of neighborhoods at risk for displacement are also home to a majority people of color, including 83 percent of the at-risk neighborhoods in the San Francisco Bay Area.78 This raises particular concern as data shows that in regions across the US, more rental units are out of reach for Black and Latino families compared to other households.

These statistics plainly show how exclusion and displacement occur; not only are lower-income families of color excluded from moving in, but if they were to lose their current home in a high-cost region like the San Francisco Bay Area, they would more likely be forced to move out of the region or out of California entirely to an area of lower opportunity. The failure to address this immediate crisis has dramatic long-term consequences, as the long-term residents of California’s urban core are pushed out and supplanted by a new, wealthier, and whiter population. This reinforces patterns of segregation that limit access to quality jobs, schools, and resources that promote upward mobility. This also contributes to a widening racial wealth gap, as evidenced by the disparities in homeownership by race.79 80

The racial and social inequities perpetuated by egregious rent increases and the housing crisis raise the stakes for the state as a whole, and communities of color, low-income individuals and families, people with disabilities and seniors, in particular. Increasing inequity between tenants and homeowners is a thread that runs through other dimensions of inequity that these historically marginalized groups face, and addressing this overarching divide allows us to move toward greater social equity overall. In other words, stabilizing rent for all tenants in California also means broadly addressing the critical needs of the most vulnerable among us, which is essential to achieving shared prosperity for Californians as a whole.