DESPITE ONGOING demographic shifts, still more than 2/3 of US citizens age 18 and older identify as non-Hispanic whites. Donald Trump won among these white voters in 2016 by an overall margin of 20 points (57-37). As the previous sections indicated, Trump consistently did much better among whites than any other racial or ethnic group across other variables such as age, gender, and income. Still, support for Trump varied in its degrees of strength and historical precedence across white sub-groups, as the following paragraphs detail.

Overall white voter participation increased in 2016 relative to 2012, even if not to the historic proportions some pre-election forecasts projected.64 It is notable that white voters maintained their 2012 share of the electorate, breaking with what had been a steady downward trend.65 Non-Hispanic whites are consistently overrepresented in the electorate compared to their share of the voting-age citizen population. But usually as the latter figure drops—from 71.1 percent in 2012 to 69.9 percent in 2014 to 68.9 percent in 2016—so too does their vote share. This was not the case in 2016, when increased white turnout, together with depressed Black turnout, maintained whites as a 73 percent majority of the electorate.66

Trump’s 20-point win among all white voters merely matched that of Mitt Romney in 2012. But the margins by which certain segments of the white electorate opted for the GOP candidate—or fled the Democrats—proved decisive. We consider two groups the most significant in this regard: first, whites who do not have a college degree; and second, whites from rural and small-town communities.

As we noted above, many post-election analyses have homed in on educational attainment as a key predictor of voter preference in 2016, often using it as a proxy variable for class identity. Although we object to the latter conflation, there is no doubt that the attention to the split between voters with and without a college degree is warranted. Indeed, had pre-election polls done a better job of attending to voters without a college degree (or “non-college” voters), the errors in their projections likely would have been far less dramatic.67

The spike in the share of non-college voters who supported the GOP was not however an across-the-board phenomenon; it was an overwhelmingly white one. Looking at the electorate by educational attainment alone, exit polls and surveys say that nationwide Clinton won 52-53 percent of college degree holders, and Trump won 49-51 percent of non-college graduates.68 This is a gap, but it pales in comparison to what we find when we disaggregate by both education and racial or ethnic identity. For example, among non-white voters with no college degree, exit polls found that 75-76 percent supported Clinton. White voters with no degree, on the other hand, gave Trump 66-67 percent of their votes.69

Indeed, within the white electorate, 2016 appears to have seen a historic gap in voting choice along lines of educational attainment. The precise size of that gap, however, remains a matter of debate. According to exit polls, white college graduates favored Trump by 3-4 points, while Trump won whites without a degree by +37—a 34- point gulf. These are the figures that have been widely reported, and they represent a marked acceleration in white non-college voters’ preference for GOP candidates. But data from a much larger national survey—the Cooperative Congressional Election Study (CCES)—differ substantially. They show Secretary Clinton narrowly winning among white college graduates, and Trump carrying whites without a degree by a smaller margin of +27.70

Non-college whites’ support for the GOP has been steadily increasing for several election cycles, including in the battleground region of the Midwest. There, the Pew Research Center finds that the percent of whites without a degree who identify as “Republican or Republican-leaning” has gone from 40 percent in 2000 to 56 percent in 2016.71 In 2008, Barack Obama won non-college whites in 15 states, including Michigan, Wisconsin, Minnesota, and Iowa. In 2016, Clinton carried them in only Massachusetts and Vermont.72 Nationally, Republican presidential candidates won among whites without a degree by +18 in 2008 and +25 in 2012.73 Against this backdrop, the question of whether non-college whites favored Trump by 27 versus 37 points is significant: It speaks to whether 2016 conformed to or exceeded the historical trend—and how much credence we should give the idea of a “Trump effect.” 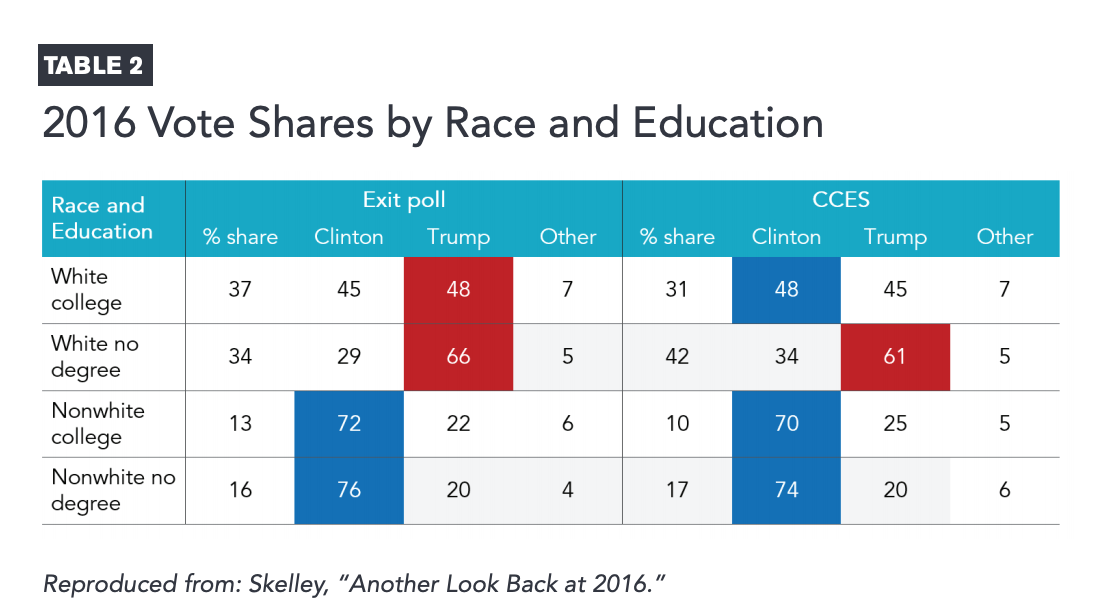 But as whites without a degree increasingly turn toward the GOP, so too are they declining as a share of potential voters. Debates over whether the group is more accurately represented in the 2016 national exit polls or the CCES essentially turn on questions about the magnitude of these trends. According to the CCES, whites without a degree accounted for around 42 percent of the electorate, as compared to just 34 percent in the national exit polls. For historical context, non-college whites were around 70 percent of voting-age US citizens in 1980; by 2016, they had dropped to just 45 percent of potential voters.74 Still, for the exit polls’ 34 percent vote share figure to be correct, noncollege whites would have needed to vote at a rate dramatically below the national average; this does not appear to be the case.75 The Census Bureau’s estimates of the vote shares of college and non-college whites are in fact entirely consistent with those of the CCES. Furthermore, certified election results also show a pattern of increased turnout in 2016 (relative to 2012) in counties where eligible voters are overwhelmingly non-college whites.76 We thus concur with the CCES that Trump’s margin among white voters without a degree was several points less than commonly believed (though surely still topping Mitt Romney’s). Meanwhile, the group comprised a larger share of the electorate than the national exit polls reflect, due to a modest increase in turnout rate, together with depressed overall participation among non-whites.

The Clinton campaign expected to be able to counter a poor showing among non-college whites by targeting swing voters with college degrees, especially in affluent suburbs in battleground states. Clinton did indeed win the support of a larger share of white college graduates than had Democrats past, but it was not enough to offset her losses. GOP gains among whites without a college degree were also evident up and down the household income scale. Statistician Nate Silver of FiveThirtyEight has shown that white-majority counties with low rates of college degrees and high incomes shifted further toward the GOP; meanwhile white-majority counties with high rates of degrees and low incomes tended to give Clinton larger margins than they gave President Obama.77

As we mentioned in the previous section, many of the largest county-level shifts in 2016 were in rural counties that are predominantly white and that Romney won in the previous presidential election. In 2016, the margins favoring the GOP candidate in these counties swelled, helping deliver their states to Trump. A Milwaukee Journal Sentinel analysis found that Trump improved on Romney’s margin in communities of less than 2,000 residents across Wisconsin by 20 points, or 120,000 votes.78 Recall that Trump carried Wisconsin by less than 23,000 votes. Nationwide, there are 1,552 counties in which more than 90 percent of the population identifies as white, the vast majority rural. Trump won 1,466 of them, with an average margin of +43 points.79

Finally, one of the most hotly debated matters surrounding the 2016 election is how many white voters cast ballots for Trump after having voted for President Obama in 2012. Major national surveys allow for different stories about the numbers of these white “Obama-to-Trump” voters. Often they are exaggerated when pundits and analysts fail to account for changes in which individuals comprised the white electorate—that is, the actual voters casting ballots. The estimates can also be inflated due to the common polling problem that voters over-report having supported past victorious candidates. One widely respected voter study minimized this problem by re-interviewing 8,000 voters in 2016 for whom they had previous voting data from 2012. It found that around 9 percent of those who supported President Obama in 2012 voted for Trump in 2016.80

As with all else, there are surely different stories to be told for different states with respect to white Obama-to-Trump voters. In Wisconsin, a notable increase in whites’ 2016 vote share undoubtedly accounts for some of the GOP’s margin shift relative to 2012 (+7.7 points).81 But it is just as certain that there were white Obama-to-Trump voters in Wisconsin. Likely there were more of them in Michigan and Ohio, where the white vote share increased much more modestly, while the Democrat-to-Republican swing was larger (9.7 points in Michigan, 11.1 in Ohio). Using the same metrics of shift in white vote share and shift in partisan vote margin, Pennsylvania likely had even more Obama-toTrump voters. Nate Cohn comes to this same conclusion about Pennsylvania through his analysis of official voter file data, which apparently do not show widespread changes in which individual white Pennsylvanians cast ballots in 2012 versus 2016.82 Obama-to-Trump shifts were no doubt extensive in Iowa as well, where the steadily 94 percent white electorate swung an astounding 15.2 points.

Trump won the presidency by securing a coalition of white voters, including the vast majority of dependable GOP supporters and significant shares of key segments of the white electorate without strong party allegiance.

Trump’s most significant gains over Romney’s 2012 performance were with whites who do not have a college degree. Though it is often glossed as a shift in “working class” voting, the pattern was in fact (a) exclusive to white voters, and (b) observable across income levels.

Part of the GOP’s increase in votes among Rust Belt whites was due to volatility in the voter pool. But there were also significant numbers of white voters who voted for Obama in 2012 and Trump in 2016, especially in rural and small-town Pennsylvania and Iowa.