PART 1 addresses the origins and evolution of the global refugee regime—the set of norms that define who is a refugee, the rights to which that person is entitled, and the norms that define who is expected to support that person. It also addresses the support that person has actually received, attending to the significance of their country of origin and intended host country, the cause of their displacement, and the broader social and political context within which their journey has taken place.

PART 2 offers our analysis of the central dynamics of forced migration in the present day—neoliberalization, securitization, and the climate crisis, to explain larger trends in the causes of contemporary forced migration, as well as how responses by the international community operate as triggers and feedback loops for such processes.

PART 3 elaborates upon regional experiences of neoliberalization, securitization, and the climate crisis by offering histories of Asia-Pacific, Latin America and the Caribbean, the Middle East, South Asia, and North Africa, and Sub-Saharan Africa. This section highlights the significance of European and US colonial and imperial influence in shaping the politics of these regions and the experience of forced migration patterns in these regions.

Policy Interventions, the last section, concludes the report by laying out practices and policies that can help establish a more equitable and comprehensive framework for identifying, supporting, and humanizing refugees.

THE INTERNATIONAL COMMUNITY has fallen short in fully reckoning with the historical and contemporary dynamics of global forced migration, and creating equitable and sustainable solutions to accommodate millions of forcibly displaced people seeking refuge from war, political instability, and environmental change. In this report, Moving Targets: An Analysis of Global Forced Migration, we interrogate the many social, political, economic, and environmental forces that constitute global forced migration, past and present, as well as how these forces have shaped the realities of millions of displaced peoples around the world.

Moving Targets aims to develop a framework of global forced migration that accounts for how the experiences of displacement across the globe and the set of norms that define who is a refugee, the rights to which that person is entitled, the norms surrounding who is expected to support that person, and the support that person actually receives, are all inseparable from not only historical and contemporary formations of colonialism, imperialism, and militarization, but also momentary and ongoing environmental changes. The framework we seek to develop also accounts for how these dynamics are collectively underpinned by processes of Othering—whether along markers of race, ethnicity, class, gender, sexuality, religion, nationality, geography, or a combination of these dimensions.

The Haas Institute has long believed that the frame of “Othering” provides a critical perspective to our common objective of building a more inclusive and equitable society. It is in the responses to the experiences of displacement across the globe that we seek to counteract such processes, expose the power structures that generate them, and also to find and elevate strains of Belonging—enough, perhaps, to generate hope for a more inclusive world.

As part of this larger framework, Moving Targets aims to:

THE WORLD IS CURRENTLY WITNESSING the largest wave of forced migration seen in nearly a century. In 2015, large numbers of predominately Syrian, Afghan, and Iraqi people who were fleeing war, political instability, and military action captured the attention of the European public, leading to the what began to be commonly described as the "European refugee crisis."

Yet major migratory waves and patterns are happening across the entire globe, and while many are due to violence and instability, those are not the only circumstances leading to displacement. Austerity measures, economic precarity, land dispossession, and, increasingly, environmental disasters due to climate change are also forcing many to migrate.

In this report, we will critically engage with the multiple crises of global forced migration in the twentieth and twenty-first centuries. These crises encompass the many causes and experiences of displacement, as well as the set of norms that define who is a refugee, the rights to which that person is entitled, the norms that define who is expected to support that person, and the support that person actually receives. Our analysis in this report includes:

After developing a framework for understanding the interrelatedness of the crises of forced migration, we ultimately envision a set of policy interventions that, if enacted, can help establish a more equitable and comprehensive social, political, economic, and legal framework for identifying and supporting refugees.

IN 2015 AN INFLUX OF PEOPLE seeking asylum made the journey to Europe by way of the Aegean Sea, the Mediterranean Sea, and Southeast Europe. Most of these people came from Africa, the Middle East, and South Asia: according to the United Nations High Commission for Refugees (UNHCR), the top three nationalities of the over 1.3 million arrivals by the Mediterranean Sea in 2015 were Syrian (49 percent), Afghan (21 percent), and Iraqi (8 percent), making up 78 percent of all refugees and migrants arriving in Europe by sea that year.

By April of 2015, the plight of these refugees became highly visible to the public when five boats carrying almost 2,000 people fleeing to the European Union sank in the Mediterranean Sea—more than 1,200 people were estimated to have died. By the end of 2015, the total scale of the mass movement had become even clearer: the total number of forcibly displaced people worldwide had reached 63.9 million, the highest level since World War II and the greatest proportion of displaced people to world population since 1951 when the UNHCR began collecting statistics.1 The “crisis” therefore came to signal not only the massive influx of migrants and refugees, but also the inability and lack of desire of European states to swiftly and safely facilitate their intake. The tragic fate that many people, including thousands of children, have experienced on their journey and at Europe’s borders has been the sharpest expression of the “European refugee crisis.”

Yet this crisis also came to illustrate the many crises of forced migration. The first crisis is the dire and longstanding nature of the factors that have forced so many to flee from their homes in countries across Africa, Asia, the Middle East, the Pacific, and Latin America in the first place. These factors are both internal and external to the countries and regions from which such people have fled, though the two are often difficult to separate. Internal factors include the capture of state institutions by corporate elites, internal civil conflict, extreme indiscriminate acts of violence, and exclusionary political and economic policies.2 External factors include imperial and post-colonial policies and practices from actors largely in the Global North, including military interventions and encampments, to economic and trade policies, to other indirect forms of influence. These have laid the ground for and exacerbated the internal mechanisms of displacement. There are factors that conjoin the myriad social, political, and economic, dynamics, most notably the global climate crisis.3 In their totality, these multiple factors make life unbearable, particularly for those already marginalized.

The second crisis is related to the role that the neighbors of many countries have played in resettling these displaced populations. Those leaving Syria, Afghanistan, and Iraq, for example, have largely been forced to seek asylum near their home country despite the lack of any sort of guaranteed long-term safety and material wellbeing in those neighboring countries. While media attention has focused on Europe opening or closing its borders to refugees, the impacts of such causes of displacement have been felt far more locally than generally understood. For example, 60 percent of those displaced in recent years were from just five countries, and 77 percent of the world’s Internally Displaced Peoples live in just ten countries, all within the Global South.4 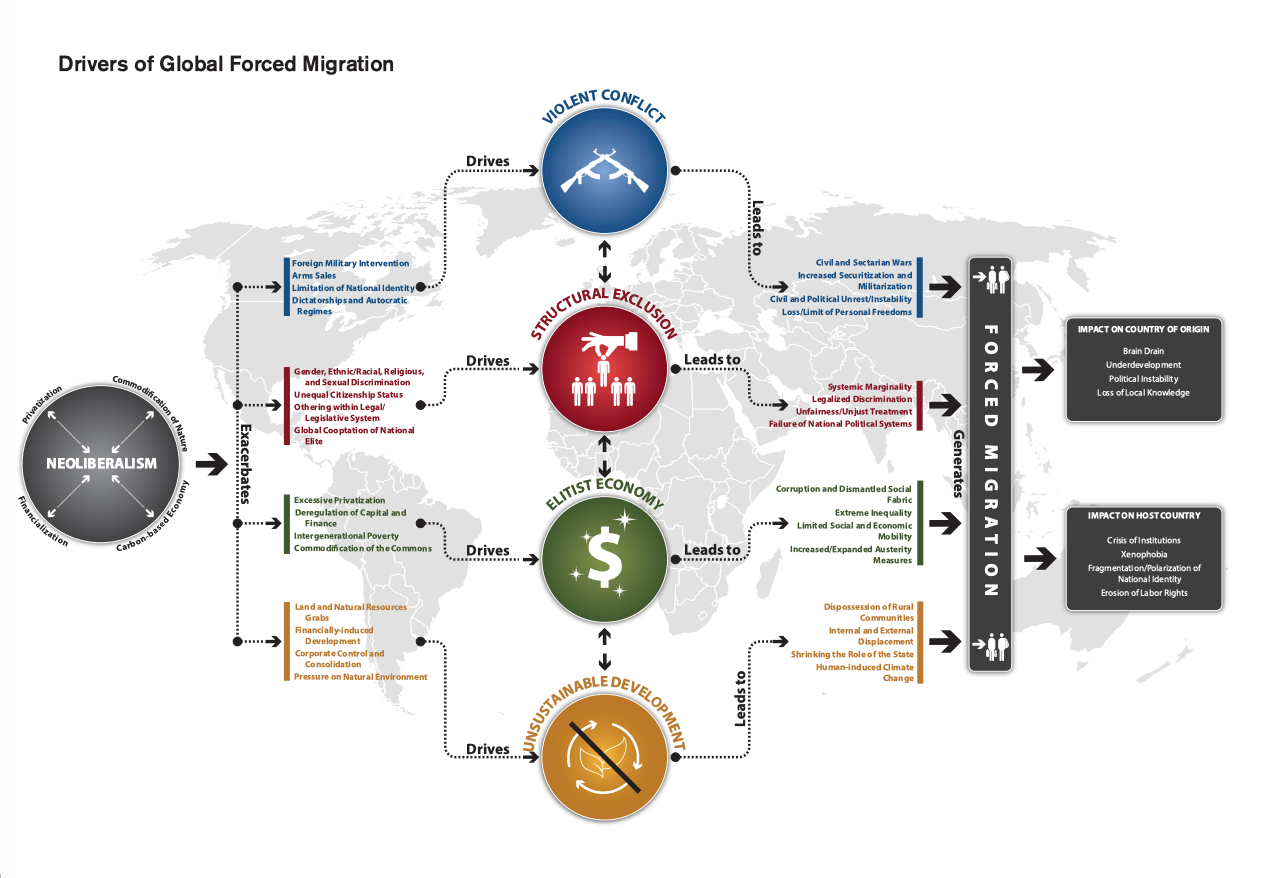 The majority of countries that host the greatest number of refugees are in the Global South and are primarily countries that border the most affected countries. As of 2016, out of the top 10 countries hosting refugees, four are in the Middle East (Turkey, Lebanon, Iran, and Jordan), one is in South Asia (Pakistan), and four are in Africa (Chad, Ethiopia, Kenya, Uganda).5 Only one European country—Germany—falls within the top ten in terms of numbers of refugees hosted.6

Most of these countries cannot adequately accommodate the refugee populations they are hosting. Smaller countries such as Lebanon and Jordan have up to one quarter of their population comprised of documented refugees. Major constraints are placed on the economies of these countries as refugees are not allowed by law to be employed and therefore have difficulty supporting themselves financially, or are unlicensed to work in the fields or professions they had in their home countries. On the other hand, larger and more prosperous countries, including Brazil, China, Hong Kong, India, Russia, and the US have sufficient financial and human resources to accept large numbers of refugees. In addition, prosperous Gulf Arab states have only accepted a very limited number of refugees over the past several years.

A third crisis is related to the experiences of those seeking refuge in the Global North, many of whom have been met with responses that are far too often neither inclusive nor humane. Across Europe, governments have ignored their obligations to the 1951 Convention Relating to the Status of Refugees in order to justify deporting Syrians back to Turkey, a country where most cannot work legally and when deportation back to Syria is a major risk. The Italian, German, and British governments have called for refugees to be returned to Libya, where many migrants work in perilous and inhumane conditions and where conflicts continue. In Greece, Western European leaders have forced the Greek government to detain arriving asylum seekers en route to Germany and elsewhere on the continent, yet have gone back on their promise to move them to such better-resourced countries. In Denmark, asylum seekers have been forced to give up their valuables in order to pay for their stay, and volunteers that have given gifts to them have been prosecuted as smugglers.

These cases are not limited to Europe. In the US, by spring 2016 more than 30 governors refused to accept Muslim refugees.7 In Australia, the decision to turn back many boats full of asylum seekers has been supported by both main political parties, resulting in breaches of international law and tensions with Australia’s neighbors. Despite the thousands of refugees who have officially been accepted by these and others countries, stories and sentiments like these are all too common within the context of the current refugee crisis.

Thus, the current “European refugee crisis” is actually part of a larger set of crises of global forced migration. These range from the crises that have caused the mass displacement of peoples largely from across Africa and Asia, to the crisis of resettlement and the selective and uneven abidance of existing refugee protection mechanisms, particularly within Europe and the US, as well as the climate crisis linked to the droughts and famines that trigger and exacerbate conflict.

Such crises highlight the need for a more holistic approach to understanding forced migration, which necessitates a critical reassessment of the global refugee regime itself—the set of norms that define who is a refugee, the rights to which that person is entitled, and the norms that define who is expected to support that person. Ultimately, this analysis calls for us to envision laws, institutions, and policies that would establish a more equitable and comprehensive response to refugees, so that all those seeking refuge and asylum across the globe are treated with dignity and are afforded belonging.