This section will detail the information needed to understand how utilities set rates and plan infrastructure investments, as well as how existing measures of affordability are designed and implemented. It will end with expert, practitioner, academic, and government critiques of those existing measures of affordability, leading into the Analysis section that proposes and implements an alternative metric, which will be used to inform policy alternatives to address affordability.

GLWA needs to make $2.8 billion33 in capital improvements over the next five years without placing an extreme burden on the population it serves. Modern utilities use a cost-based approach—allocating costs to different groups (“classes” or types of customers, geographically diverse communities, etc.) based on the cost of including them in a utility’s service—in determining what rates to charge different types of customers.34 According to one of the foundational textbooks for cost allocation and rate design, determining how to do so is difficult and open to interpretation:

Cost allocation is inexact; no single correct approach or method exists. Much depends on the criteria used by analysts… The choice of a cost allocation approach depends largely on utility management objectives and regulatory policy considerations… As in selecting a cost allocation method, the choice of rate design involves tradeoffs among the goals of efficiency, equity, revenue adequacy, and administrative feasibility.35

The American Water Works M1 manual identifies some of those possible utility management objectives as:36

The manual further identifies distinct situations and pricing considerations utilities must face, such as:37

As will be demonstrated in this report, there is a lack of affordability in the GLWA and DWSD-R service areas existing even before needed investment costs are added, and clear differences in ability to pay between customer classes. There is also a business case to better incorporate this structural mismatch in utility rate design and cost recovery, enabling savings on collections activity. As the National Academy of Public Administration summarizes:

Ultimately, the challenge is one of maintaining affordability while also recovering the full costs of providing water services, which, in absence of low-income assistance, is limited by low-income households' ability to pay. Rate structures themselves may place a disproportionate share of the burden on low-income households.38

When discussing affordability, the United States Environmental Protection Agency (EPA) is central to the conversation. This is in part due to the enormous cost burdens on water systems stemming from the federal requirements promulgated in the 1972 Clean Water Act (CWA), 1974 Safe Drinking Water Act (SDWA), and subsequent amendments to those acts. The EPA creates and enforces regulatory standards for this legislation, including compliance with the regulatory status of contaminants in drinking water, source water protection, overflow discharges from treatment plants, and more. In the context of these regulations and associated permitting standards, affordability has a twofold definition: 1) the ability of utilities and local governments to afford capital investments and operation costs required to meet EPA regulations, and 2) the ability of residents within a utility’s jurisdiction to afford the retail cost of water and wastewater service—costs that underpin system revenue.39

Local regulators and utility operators use EPA guidelines in decision-making to promote public health and environmental quality. The regulatory authority of the US EPA and state EPA agencies and their ability to take enforcement action incentivizes systems to work with the EPA to create compliance schedules and take advantage of funding programs offered. Unfortunately, the costs of maintenance and system upgrades needed to meet regulatory standards are often too great for local systems to bear alone. This leaves local governments responsible for covering the large majority of costs and makes user revenue a vital component of the overall revenue needed to cover expenses.

Affordability for households is a primary concern for local governments tasked with setting rates to recover system costs. The EPA’s metrics have become the de facto definition of affordability in the majority of academic and practitioner discourse, including in applications beyond what the EPA originally intended. This has led to widespread critiques of the EPA’s measures, both in theory and practice, which are detailed below.

The EPA’s 1997 “Combined Sewer Overflows—Guidance for Financial Capability Assessment and Schedule Development”40 (1997 guidance) establishes a two-phase approach to assess a permittee’s (utility or municipality) capability to meet federal mandates and provide affordable wastewater service. The first stage is a “residential indicator” (RI), which is a ratio of a utility’s average cost per household for wastewater treatment to median household income (MHI) across the system. For large or complex systems that span multiple communities, MHI is a weighted average of MHI for each community, scaled by the size of that community. The EPA stated that an RI threshold of 2 percent system-wide would be deemed unaffordable.

If the 2 percent RI threshold is crossed, a second stage is triggered that implements a “financial capability indicator” (FCI), which uses six economic indicators (bond rating, overall net debt as a percentage of full market property value, unemployment rate, MHI, property tax revenues as a percent of full market property value, and property tax collection rate) combined in a matrix with the RI to reach a finding of “low,” “medium,” or “high” burden.

Taken together, the RI is meant to indicate the ability of a utility’s residents across the system to afford the allocated costs of wastewater service, and the FCI is meant to assess a utility’s ability to fund or finance capital investments required to meet EPA regulations.

For drinking water (drinking water RI), EPA considers a single stage analysis of the ratio of average cost per household to MHI of small systems.41 The MHI for small systems was determined internally by the EPA from data contained in the Community Water System Survey and US Census.42 In practice, this functions similarly to the wastewater RI, but with a national average MHI rather than local. A threshold of 2.5 percent for drinking water is deemed unaffordable.

In either case, if the EPA’s metrics find problems of unaffordability in wastewater or drinking water for a system, permittees can negotiate with the EPA for a temporary “variance” or “exemption” from CWA or SDWA regulations.43 These variances and exemptions differ based on whether the negotiations are over wastewater or drinking water, as well as on the size of the system. The temporary status of variances and exemptions are intended to allow a utility time and financial space to raise the necessary capital for implementing the technology required to come into compliance. During this time, the utilities must implement minimally required technology improvements, hold public hearings regarding the planned variance/exemption, reevaluate water quality results at set intervals, and set a schedule for full compliance. Variances and exemptions are important tools that save utilities significant amounts of money by avoiding legal costs from EPA lawsuits over noncompliance or costs incurred from having to procure emergency bond deals at unfavorable terms.

Another important impact of findings of affordability relates to additional funding sources for utilities. The EPA offers low-cost infrastructure loans as part of the Drinking Water State Revolving Fund (DWSRF) and Clean Water State Revolving Fund (CWSRF).44 Both are federal-state partnership programs funded by Congress and administered by the EPA, which provide grants to states who then manage individual loan disbursements for capital improvement projects to public utilities. Importantly, the EPA grants states the ability to set project priorities and customize loan terms to meet the needs of “disadvantaged communities” through additional subsidies beyond zero-interest loans, including grants, principal forgiveness, and negative interest rate loans.45 If a utility is not found to have affordability problems, these important financial tools may not be applied.

Lastly, findings of unaffordability by the EPA metrics matter because they can be used as inputs in decision-making wholly separate from EPA regulations, such as state funding decisions for social programs related to utilities, utility decisions on customer assistance programs or alternative rates, and academic, industry, or government studies on the socioeconomic characteristics of customer classes.46

The EPA metrics have been roundly criticized from a wide variety of sources, including academics,48 industry experts,49 practitioners,50 federal agencies,51 and the EPA’s own science advisory board,52 spanning decades. Until very recently, however, very little action has been taken to address deep flaws in these metrics and their use.

In 2016, the Senate Appropriations Committee directed the EPA to contract with the National Academy of Public Administration (NAPA) to “conduct an independent study to create a definition of, and framework for, community affordability of clean water”53 that encompassed both drinking water and wastewater. NAPA produced a comprehensive literature review, over 100 stakeholder interviews (including with PA Financial Advisory Board, Council of Mayors, water industry groups, academics, consultants, governmental entities, and others), a stakeholder survey, and a roundtable discussion with stakeholders and experts.54 Their 2017 report produced a set of findings and recommendations related to affordability concerns and improvements to EPA metrics, among other things.

Although both RI and FCI were criticized in literature and by stakeholders as “inaccurate” and “inadequate,” NAPA found that the RI was the “most severely criticized” of the two.55 Stakeholders and the relevant literature agree that:56

Additionally, because the RI component for wastewater is a two-stage process, an inaccurate first-stage RI finding means an FCI assessment will not even take place. Because of that and the above findings, the scope of this report will focus on RI for both water and wastewater.

In discussions with NAPA about the above critiques, the EPA noted that the RI was intended to assess overall system affordability rather than individual household affordability, that it desired a “common starting point” for negotiations between regulators and individual permittees, and that an adjustment to the metrics would increase staff workload by reopening negotiation around existing consent decrees (legal agreements between EPA and permittees regarding actions and timelines required to achieve compliance with CWA and SDWA regulations).57

The EPA also released an updated framework for wastewater affordability in 2014 wherein it acknowledged that financial capability “is on a continuum” and is not best represented by rigid break points or thresholds. It affirmed that the EPA would consider other information presented by permittees not contained in the FCI, such as income distributions by group or geography, poverty rates and trends, population and labor market trends, and extenuating circumstances around bond ratings, among others.58 Critically, however, the updated framework did not change any of the underlying 1997 affordability evaluation processes or thresholds, nor did it comment on the drinking water RI.

EPA’s points may be valid. However, NAPA found stakeholders report that in practice “in certain regions, EPA regional staff, state regulators, and enforcement staff still rely almost exclusively on the 2 percent MHI test… notwithstanding EPA’s view that EPA is providing flexibility to permittees in assessing financial capacity and excessive burden… this is a problem particularly in EPA’s mid-west Region 5 (Illinois, Indiana, Michigan [emphasis added], Minnesota, Ohio, and Wisconsin).”59 NAPA points out that the deficiencies in RI and FCI “limit the ability of those metrics to establish an acceptable and equitable common starting point.” Further, localities report that once they use the 2 percent measure, they often feel locked into it from a regulatory perspective or do not understand that they can engage with the EPA for flexibility on mandates (or they lack the technical capacity to do so).

Industry experts, practitioners, federal agencies, academics, government review panels, and even the EPA’s science advisory board all agree that current affordability metrics are inaccurate and should be updated. Accurate measures of affordability are critical for both equity and efficiency in utility cost allocation and rate design. 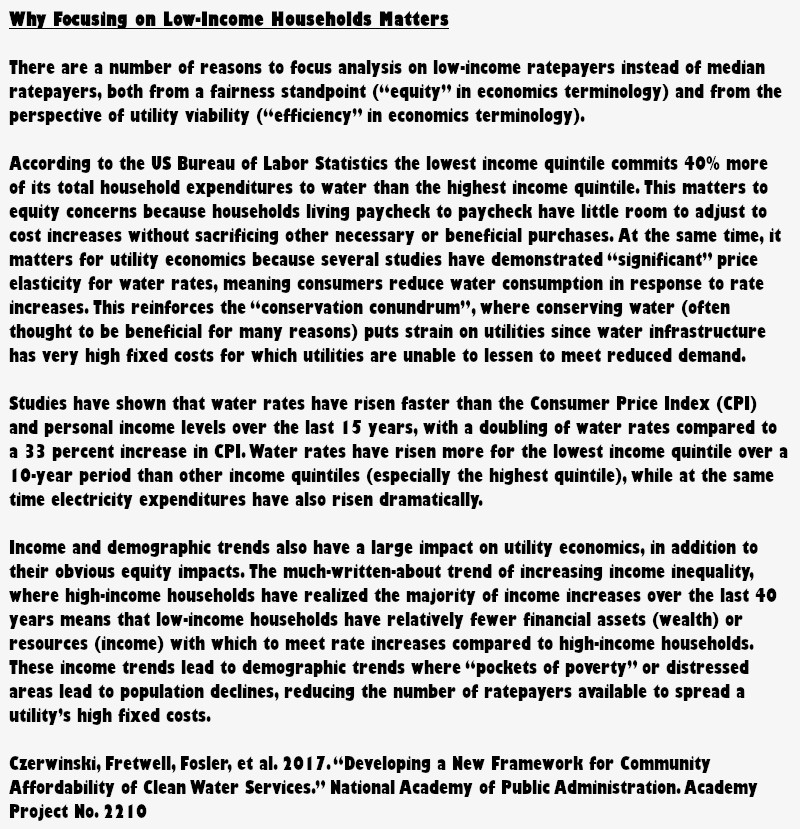