The Context of Water Affordability

In the last few years, increased attention has been paid to rising costs for water and wastewater services, including the need to upgrade and replace water and wastewater infrastructure across the country. In a survey of 260 water utilities and 180 wastewater utilities across 42 states, average water rates increased by 40 percent and average wastewater rates increased by 24 percent between 2008 and 2016 alone. Regional price escalation was highest in the Midwest and Northeast, although these regions had the lowest average water rates overall, while West-Pacific states had the highest prices overall, but a modest price escalation rate.1

Affordability considerations are especially concerning in the context of declining public investment. While public spending on water and wastewater has increased steadily over the last 50 years, the annual rate of increase has decreased for capital infrastructure, as well as operations and management.2 In addition, of the total public spending on water and wastewater systems capital programs—comprised of federal, state, and local governments—state and local governments account for almost 100 percent.3 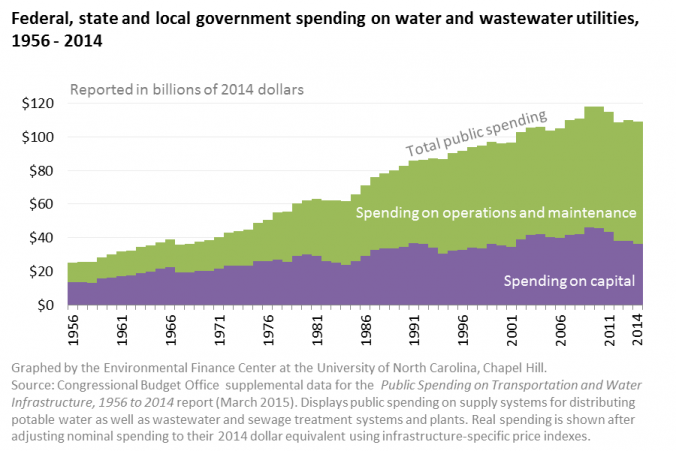 Figure 2: Source of Expenditures on Local Water and Sewer 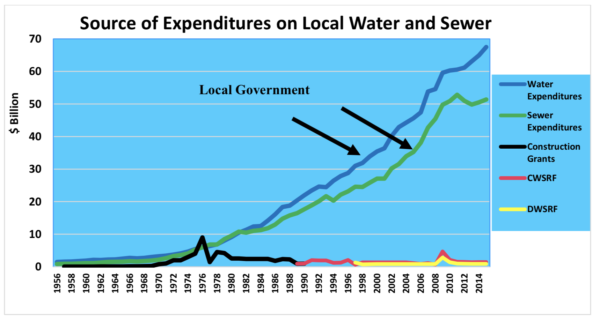 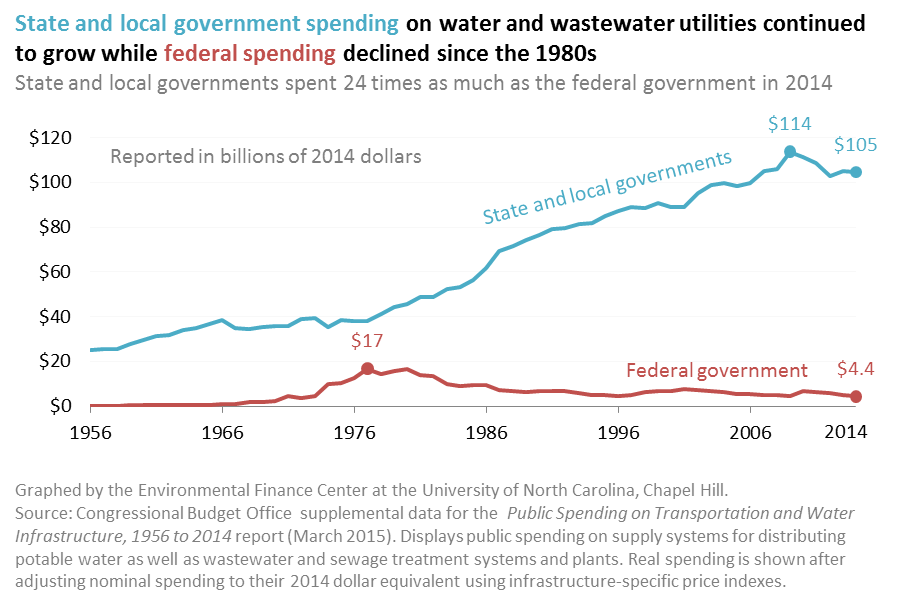 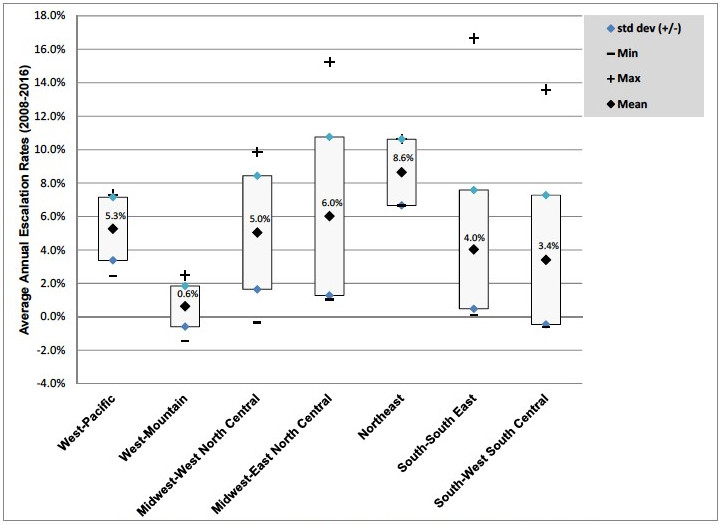 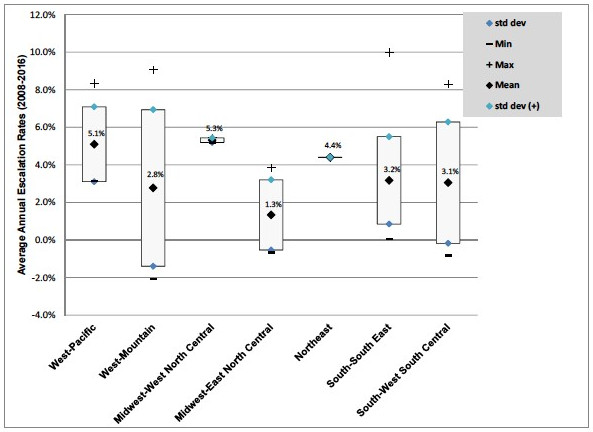 These national trends can be seen in Detroit, where the city and the Detroit Water and Sewer District (DWSD) experienced dramatic population decline and disintegration of the local economic base, both before and after the 2008 financial crisis. DWSD-R (DWSD Retail) and the Great Lakes Water Authority (GLWA) continue to need upgrades so they may fulfill environmental quality and public health standards. The system faces significant financial demands to upgrade, maintain, and operate the regional water and wastewater infrastructure. As is the case with most public water and wastewater utilities, local government provides the vast majority of revenue for these purposes. While the larger Detroit metropolitan area serviced by DWSD has experienced modest population growth between 1950 and 2010, the region’s urban core—the city of Detroit—lost 61 percent of its population in that same period. A declining population of users within the city’s center, coupled with DWSD’s institutional structure that places different cost burdens on wholesale suburban customers, makes it extremely difficult to spread overall costs among system-wide users.

Through the bankruptcy proceedings, the Great Lakes Water Authority was created as a state chartered public corporation. Upon the effective date of the lease and services agreements DWSD-R is the way DWSD is described. Former wholesale customers of the DWSD system are now wholesale customers of GLWA, and DWSD-R is also a wholesale customer of GLWA. While DWSD-R retains ownership of the entire system, it is operated and managed by GLWA. DWSD-R maintains specific portions of the system within the city’s boundaries.4

The human right to water depends on the financial capacity to provide access to water. In practice, the demands put upon local government due to the lack of federal investment of infrastructure means that in order for public systems to have the revenue to maintain, operate, and upgrade the system, there must be clear guidance on how to determine who is able to pay and who is not able to pay. This determination is exceptionally important in the growing number of cases in which financially stressed public utilities attempt to maximize revenue through collections enforcement. If a user of the utility is unable to pay, this strategy is ineffective, wasteful of utility time and resources, and a violation of human rights.5

Ultimately, the crux of this multifaceted problem is the need to define affordability in such a way that utilities are able to effectively plan and fund necessary capital improvements, as well as ongoing operations and maintenance, without placing an undue burden on vulnerable populations, especially those who are unable to pay.

Current measures of affordability from the US Environmental Protection Agency (EPA) are widely used but inherently flawed, and have been critiqued by experts, practitioners, academics, government organizations, and even the EPA's own science advisory board.6 Current EPA metrics for water and wastewater use aggregate measures of median household income (MHI), rather than utilizing a place-based analysis. This masks unaffordability in sub-populations within a utility, such as different communities, customer classes, neighborhoods, and demographic groups. Additionally, the use of median shifts the focus away from the low-income segment of the population which is in fact facing affordability issues and is most subjected to behavioral changes in water consumption that impacts utility financial planning.

The findings identified by applying a particular measure of affordability are important for several reasons. If unaffordability is found, permittees are able to negotiate with the EPA to delay or reduce clean water regulations (subject to minimum health standards), avoiding significant legal costs from EPA lawsuits or immediate debt required to finance technological improvements to achieve regulatory compliance.7 Additionally, findings of unaffordability allow beneficial financial terms from EPA-financed state revolving funds that finance infrastructure projects, allowing loans to be converted to grants or even zero-to-negative interest rates.8 Lastly, findings of unaffordability are used as inputs in policymaking wholly separate from the EPA, such as state or local funding decisions around social programs, utility customer assistance programs, and academic, industry, or government studies on socioeconomic characteristics of the populations served.9

In this study, the EPA and alternative metrics are applied to the DWSD-R service area. The question of water and sewer affordability is one of national significance, and this report adds to the literature by demonstrating the importance of the specific measures used, applicable in both Michigan and other areas across the country.

The first type of metrics studied—the current EPA metrics—find no affordability issues within communities or neighborhoods in the GLWA or DWSD-R service areas, either in the total bill or the separate water/wastewater components. 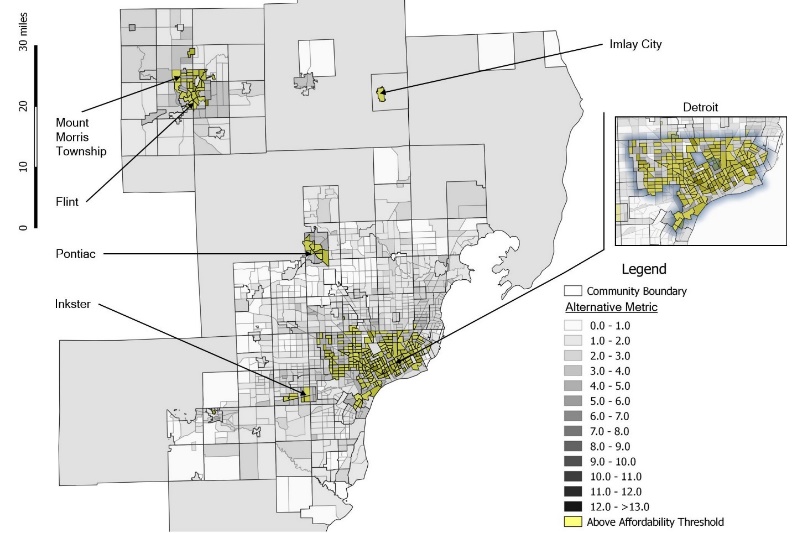 In the image above, this metric finds unaffordability (in yellow) in seven communities, spatially clustered around urban centers, all of which have local MHI below $31,300. Customers within tracts above the metric’s affordability threshold and with incomes under $29,999 comprise 72,185 households in Detroit and 35,864 households within the rest of GLWA.

The third type of metric—what we describe as the realistic specification of an alternative metric—uses local income data like the conservative alternative metric. What sets this metric apart is that it changes the focus of the analysis to the twentieth income percentile (the value below which 20 percent of households exist) rather than the median. The twentieth percentile is commonly used as the lower bound of the middle class. Use of this income level for a water and sewer utility affordability metric has been advocated for by scholars, experts, and a prominent government review panel. 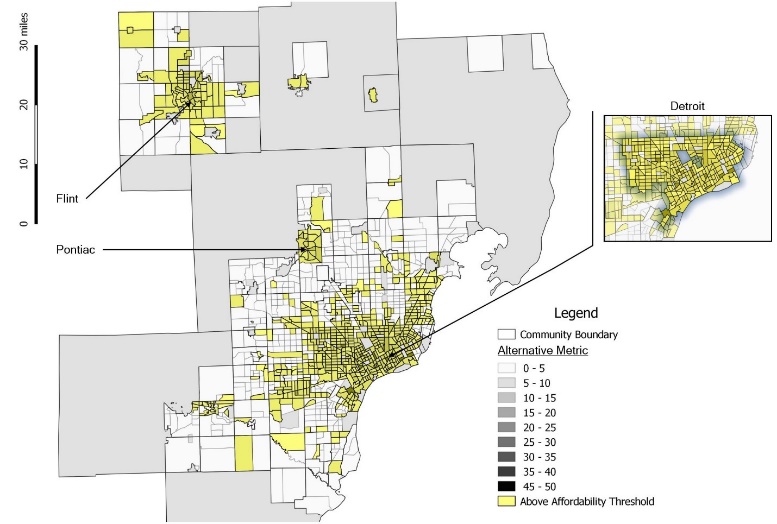 Applying this metric to the GLWA and DWSD-R service areas in the image above shows unaffordability (in yellow) in 45 communities, all of which have twentieth percentile income below $31,000 (aside from a single outlier facing above-average annual water costs). Unaffordability is again spatially clustered around urban areas, but with this metric, we also see it is more widespread into suburban areas. This spatial clustering pattern is consistent with other studies that have shown “pockets of poverty” using different metrics, which are patches of unaffordability within communities—individual census tracts that rise above the metric threshold within a community that does not itself as a whole break the threshold.  Customers within tracts above the metric’s affordability threshold and with incomes under $29,999 under this specification comprise 104,181 households in Detroit and 204,308 households within the rest of GLWA.

In sum, 308,489 households in the GLWA and DWSD-R service areas with incomes below $29,999 are facing water and sewer insecurity. This is meaningful for efforts to create equity and more evenly distribute resources within regional areas through targeted policy measures. Literature has shown that census tracts with median incomes below $32,000 have higher percentages of disabled people, higher unemployment rates, higher levels of public assistance income, higher incidence of sole female heads of household, larger percentages of minority residents, and lower rates of health insurance.

Targeted policy alternatives for addressing unaffordability in Michigan should consider what has been described as a restrictive legal environment. A Michigan Constitutional Amendment and a State Supreme Court case interpreting it (referred to as Headlee/Bolt) found that some utility charges that the utility categorized as user fees were illegal taxes.10 However, there is disagreement among experts and practitioners about how this decision could apply in the context of water affordability policies and institutional practices throughout the state.11 More restrictive interpretations of the Headlee/Bolt case are not settled law as demonstrated by a number of cases brought against townships in circuit court, which have had mixed results.12

Throughout the US, policy alternatives that attempt to address unaffordability fall under two general categories:

The design of the customer assistance program offered by GLWA and DWSD falls into the first category. Called the Water Residential Assistance Program (WRAP), it provides bill credits, arrearage (past due bills) assistance, water efficiency audits, and minor plumbing repairs to households with income at or below 150 percent of the federal poverty level and that meet a number of other criteria. The program helps households facing temporary unaffordability crises, but certain features like a two-year cap on participation, minimum payment qualifications, focus on arrearages over bill credits, and limited funding means that it does not offer sustainable relief or address structural causes of unaffordability. In Detroit, the area with the most acute needs and largest WRAP funding, the program is estimated to have reached only 11 percent of qualifying households. Estimated WRAP funding needed to reach the rest of the need in Detroit alone ranges from $32 million to $46 million. It is clear that, even with an infusion of additional funds, WRAP or similar customer assistance programs alone are not sufficient to durably and sufficiently solve the region’s affordability problems.

Customer assistance programs treat the symptoms of unaffordability, but alternative rate designs treat the structural root causes. This study provides the necessary empirical evidence to tailor an alternative rate design and provides a set of recommendations to implement it. The study holds significance for institutions that regulate and operate the 52,000 water plants and 16,000 wastewater treatment plants that serve 86 percent of US residents. Relieving the burdens of affordability problems is urgent, and developing a shared understanding of the degree of the problem will enable better communication about strategies and solutions to address it.